Welcome to Friday, where COVID spikes in Asia, Germany formally recognizes its second 20th-century genocide and a fugitive in New Zealand went the wrong way in a helicopter. Berlin daily Die Welt introduces us to an openly gay Catholic priest, whose Sunday Mass is always full.

• UN to investigate war crimes over Israeli-Hamas conflict: The UN Human Rights Council has voted to investigate violence in the recent conflict between Israel and Hamas. The United States worries this decision would threaten the progress of bringing calm to the region.

• Syria's Assad wins fourth term: Syrian President Bashar al-Assad won a fourth term in office with 95% of the votes in an election criticized by Western countries as not free or open. The country has been devastated by a ten-year conflict that has killed hundreds of thousands of people and driven 11 million people — about half the population — from their homes.

• Germany recognizes colonial crimes in Namibia as genocide: Germany has officially recognized that it committed genocide in Namibia, apologizing for its role in slaughter of Herero and Nama tribespeople between 1904-1908.

• COVID-19 spreading in Asia: South Asia has crossed 30 million COVID-19 cases on Friday. Japan says it will consider sharing some of its vaccine doses with Taiwan, which has seen a sudden spike in cases and only has 1% of its population inoculated. In Australia, the spread of the Indian variant of coronavirus has forced the city of Melbourne to enter its fourth lockdown since the beginning of the pandemic. 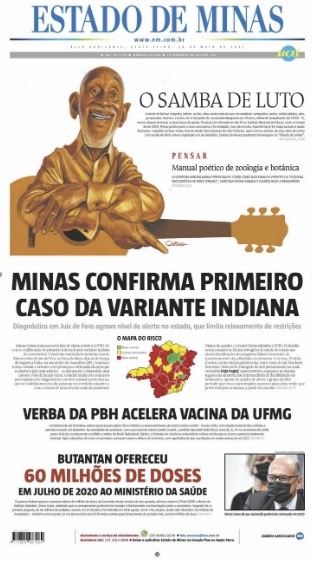 "The samba of mourning," titles Brazilian daily Estado de Minas as an homage to Rio de Janeiro-born singer and composer Nelson Sargento. The icon of samba and Brazilian popular music died at the age of 96 from coronavirus.

The openly gay priest shaking up the Catholic church in Germany

Holger Allmenroeder is a Catholic priest who is also openly gay. He supports gay and lesbian people, divorcees and those who have remarried. Traditionalists may find him alienating but his masses are well attended. Is he the future of the Church? asks Marlen Dannoritzer in German daily Die Welt.

Allmenroeder, 58, says gay and trans people often believe in God, but find themselves shut out from the Church. Recently, the debate about homosexuality in the Church was reignited when priests in a number of German parishes carried out blessings of same-sex unions. Allmenroeder was among them, blessing the unions of two couples. He says that the increased awareness was good, but he doesn't like to think of it as some form of protest. "Blessing same-sex unions should simply be normal."

Allmenroeder didn't see his homosexuality as a reason not to be ordained in the Catholic Church. He didn't want to hide it, although it meant many stumbling blocks were put in his way. When he applied to the seminary, he felt there was a lot of disapproval, especially from one particular man: "The Archbishop of Cologne at the time told me I would never be a priest. He said he would personally use his influence to stop me — simply because I was open about being gay." Instead of holding him back, Allmenroeder says these experiences have made him stronger.

More and more people are turning their backs on the Church. In 2019 alone, more than 272,000 German Catholics left the faith. Young people especially say that the Church is not authentic, that it is hypocritical and unapproachable. They are calling for a realignment, a more modern approach. Allmenroeder doesn't want to wait any longer. He wants to see female priests ordained, and says that women who have abortions shouldn't be judged. "The fact that the Church gets involved there is simply an expression of patriarchal structures."

After officially recognizing that it committed genocide during its colonial-era occupation of Namibia, Germany announced it would financially support the "reconstruction and the development" of the southern African country with a program worth more than 1.1 billion euros.

When Japan was in need, Taiwan sent us 2 million masks.

— Masahisa Sato, a top official of Japan's ruling party said the country should send some of the 400 million doses of COVID-19 vaccines it has secured. After being largely untouched by the pandemic, Taiwan has seen a sudden rise in cases, and has only 1% of its population vaccinated.

Welcome to Friday, where an Amnesty International report accuses China of "crimes against ...