The skies above Beijing turn a dark yellow as China's capital city is hit by a third major sandstorm in five weeks. - Todd Lee/ZUMA Wire
WORLDCRUNCH
2020-04-16

Welcome to Friday, where a mass shooting in Indianapolis leaves eight dead, Hong Kong media tycoon Jimmy Lai is sentenced and a Danish photographer's image from Brazil wins World Press Photo of the Year. Independent media Kayhan-London also exposes how the suspected sabotage at the Natanz nuclear facility in Iran has done more than physical harm for the regime.

• Hong Kong's Jimmy Lai sentenced: Two of Hong Kong's best-known activists were sentenced today for their participation in unauthorized assemblies during the 2019 mass pro-democracy protests. Media tycoon Jimmy Lai was sentenced to 12 months in prison, as democratic activist Martin Lee avoided prison because of his advanced age, and was given a suspended sentence of 11 months.

• Brazil's Supreme Court clears path for Lula to take on Bolsonaro: The Brazilian Supreme Court has confirmed its decision to annul convictions against former President Luiz Inácio Lula da Silva, who was accused of corruption. This sets up a likely head-to-head with conservative President Jair Bolsonaro in the 2022 elections.

• Argentina closes schools as COVID-19 surges: Argentina's government has announced new pandemic restrictions to curb the spread of the virus in and around capital city Buenos Aires, including shutting down schools and a night-time curfew.

• "Sexual slavery" in Tigray: New revelations of rape and a declaration by a top Ethiopia health official has pointed to widespread sexual abuse in the conflict in the northern region of Tigray. Both sides are said to have committed war crimes, including sexual violence. Hundreds other women have reported rape.

• Mystery animal turns out to be a croissant: Multiple residents in a neighborhood in Krakow, Poland called animal welfare workers after having spotted an unusual animal sitting in a tree for several days, fearing attack. An investigation revealed that the creature in the tree was actually a croissant. 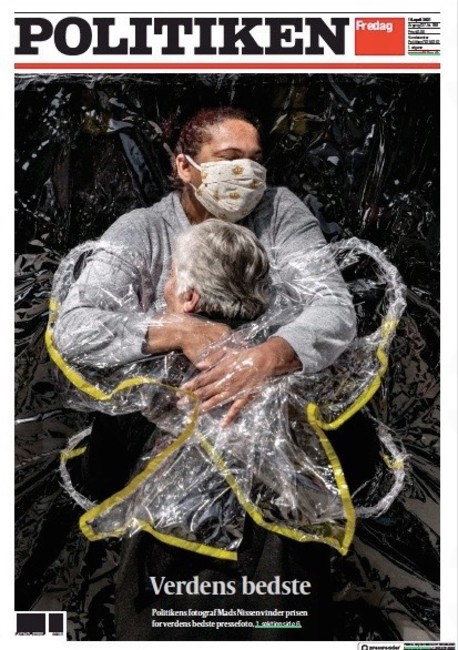 Danish daily Politiken features the photograph of Copenhagen-based Mads Nissen, which was awarded the World Press Photo of the Year. The image shows an 85-year-old Brazilian woman getting her first embrace in five months from a nurse in Sao Paulo in August 2020.

Besides partially destroying a key nuclear installation, the suspected sabotage at the Natanz uranium enrichment facility is also exacerbating tensions within Iran's leadership ranks. Was that part of the purpose? asks independent media Kayhan-London.

Iranian authorities suspect sabotage, and have called the explosion and subsequent blackout at the site a case of "nuclear terrorism," presumed to have been carried out by Israeli agents. While damage from the explosion is clearly considerable, it is not impossible for officials of the Islamic Republic to have exaggerated and lied about the real harm done to the centrifuges, as a distraction from the country's nuclear activities. Indeed, they may be giving false information hoping to obtain concessions from the West as an injured party — now that talking tough has not proven as useful ahead of talks.

In recent years, talks on Iran's program have been ongoing, sometimes in secret, and either in direct or indirect form through third parties. These conversations have yielded concessions on both sides, and even produced agreements. But at times where diplomacy proved fruitless or when Iran is considered to have crossed the world's security lines, Israel and the Western powers, either separately or in tacit cooperation, have acted against Iran's nuclear threat. The West's "undiplomatic" interventions include collaborations in 2007 between Dutch, U.S. and Israeli spy services to launch a cyber-attack on the Natanz plant.

These blows have done more than physical harm. In each case, they have an impact as well on the regime's standing, often making a mockery of its political calculations and fanning discord among its nomenklatura, as the latest Natanz explosion is doing. Social platform users have latched onto recent pictures of a bedridden spokesman for Iran's nuclear agency, Behruz Kamalvandi — who said he had fallen into a ventilation shaft — saying his pained face symbolized the state of the entire regime.

As of this writing, that's the dollar equivalent of the highest cryptocurrency bid on the first NFT from exiled American-born, digital whistleblower Edward Snowden. Dubbed Stay Free, the signed work combines images of the court ruling that the National Security Agency's mass surveillance violated the law, with a portrait of Snowden by renowned photographer Platon. Still based in Russia, the former National Security Agency consultant is capitalizing on the boom in NFTs, or non-fungible tokens, to push his cause for online transparency through the blockchain-backed market for unique digital files. Part of the proceeds of the auction will go to the Freedom of the Press Foundation.

The third wave of the pandemic has our country firmly in its grip.

— German chancellor Angela Merkel said during a speech in parliament, as she urged lawmakers to approve new powers to enforce lockdowns and curfews on areas with high infection rates, even if regional leaders resist them.