Welcome to Wednesday, where Israel carries out first airstrikes on Gaza since the ceasefire in May, Joe Biden and Vladimir Putin meet for the first time since Biden's election and Ronaldo changes Coke into water. Chinese daily Economic Observer also advocates for more open discussion about the real reason why China's couples are not having more children.

• Israel air strikes in Gaza after Hamas incendiary balloon attacks: Early Wednesday morning, Israel carried out air strikes in Gaza in response to fire balloons launched by Hamas from the territory. This is the first major flare-up since last month's ceasefire following a brief but deadly war. It is not known whether the latest strikes have caused any injuries or death.

• Biden-Putin Summit in Geneva: U.S. President Joe Biden and Russia's President Vladimir Putin have a highly anticipated bilateral meeting in Geneva today. On the agenda: regional conflicts, climate, COVID and cybersecurity. No major breakthroughs are expected but there are hopes that the leaders will find some common ground after trading invectives from afar in recent months.

• Car bomb explosion at Colombia military base injures 36: In the Colombian border city of Cucuta, two men drove a white Toyota truck into the military base after passing themselves off as officials. According to the Defence Minister Diego Molano, the hypothesis is that the National Liberation Army guerrillas are to blame but the attack is still being investigated.

• Leftist Castillo wins popular vote in Peru's presidential race: With all ballots counted, and a turnout of nearly 75%, leftist candidate Pedro Castillo has just over 50% of the votes. But he cannot be declared the winner until electoral authorities have finished processing legal challenges brought by right-wing contender Keiko Fujimori. It could take weeks before a winner is formally announced.

• China to send astronauts to new space station: On Thursday, three veteran astronauts will become the first Chinese astronauts to land on the initial stages of China's orbiting space station module, Tiangong or Heavenly Palace, which is still under construction. The mission, called Shenzhou-12 or Divine Vessel, is the first of four planned and marks a significant milestone in China's expanding space program.

• Greenpeace parachuting protesters lands on soccer fans: Several spectators were treated for injuries caused by a Greenpeace protester who parachuted into the Munich stadium before France played Germany at the European Championship. The parachutist seemed to lose control and had a brush with the supporters before landing on the field. Greenpeace has apologized for putting people in harm's way. 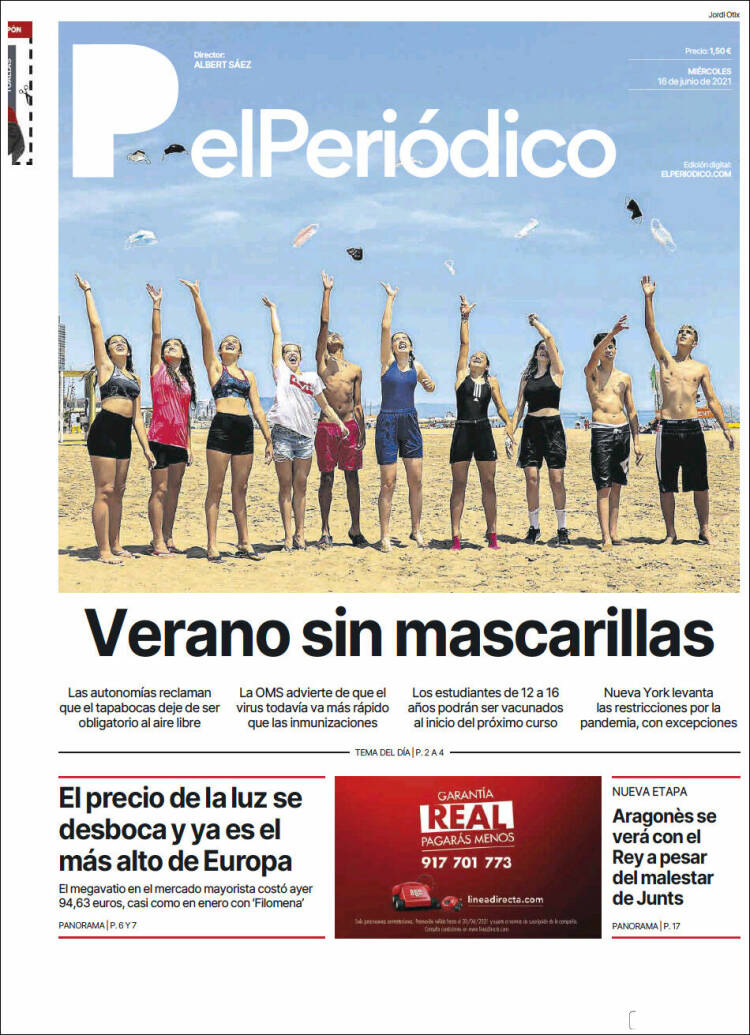 "Summer without masks," titles Spanish daily El Periodico as the country's Ministry of Health is expected to announce a loosening on the face mask rules in outdoor spaces in July.

China: the public's right to speak up on family planning policy

The Chinese Communist Party is not used to sharing the decision-making role with the public, but that may be exactly what all sides need to try to encourage more Chinese people to have babies, reports Beijing-based daily Economic Observer.

On May 31, China announced its new so-called "three-child policy" that allows couples to have three children. The policy was announced just 20 days after the release of the results of the Seventh National Population Census. They show the country's trend of an aging population is worsening, with only 12 million new births recorded in 2020, the lowest since 1960. This isn't a coincidence. Even though this still is far from responding to the public's expectation of a full easing of a couples' birth limit, the three-child policy represents nonetheless a major readjustment of China's birth control principle.

It's worth pointing out that not only are couples now allowed to have three children instead of two, the National Health Commission which is in charge of family planning, pointed out that complaints over policy issues such as marriage, child-raising and education should also be addressed. This includes providing young people with guidance on family and marriage values, a universal childcare system, promotion of educational equity, supply of high-quality educational resources and reduction of education costs.

The relevant policy details have not yet been announced, but we believe that the public should have a full say in this. These policies concern all those who are going to be parents and those who will be parents in the future, and will ultimately concern every family. Hence, the government's decision-making agencies ought to listen to the public's expression of their interests. This involves a process of open discussion and full interaction. Unless there exists a positive response and participation from the public, the effectiveness of the policy may be greatly compromised.

After Portuguese soccer icon Cristiano Ronaldo asked for two Coca-Cola bottles to be replaced with water during a press conference at the Euro competition, the share price of the soft drinks giant fell by 1.6% — a market value dip of $4 billion.

Archeologists digging near the central Israeli city of Yavne have uncovered the most delicate of artifacts in the remains of an ancient cesspool. Inside the 1,000-year-old cesspool, they were surprised to find an apparently intact hen's egg, dating all the way back to the Byzantine period, according to daily Haaretz.

Dr. Lee Perry Gal, a poultry expert at the Israel Antiquities Authority, explained how extraordinary it was to find the egg: "Eggshell fragments are known from earlier periods, for example in the City of David, Caesarea and Apollonia, but due to the fragility of the eggs, almost no whole hen eggs have been preserved. Even on a global level, this is an extremely rare find."

One of the archeologists excavating the site, Alla Nagorsky, credited the cesspool with the survival of the 1,000-year-old egg all these years, explaining that it was the soft human waste that preserved it. Yet after surviving for a millennium in a toilet, a small crack formed at the bottom of the egg as the scientists extracted it from the pit, as French monthly magazine GEO reports, preventing it from making it back to the lab fully intact. Only a portion of the yolk was salvageable, which scientists will use for future DNA analysis — but still leaving unanswered the eternal question: which came first, the chicken or the egg ... or that awful smell from the cesspool?

Rope bridges (Q'iswa Chaka in the Quechua language, also spelled Queshuachaca) have been used to cross over rivers, canyons, and gorges in Peru for centuries. Peruvians in the Huinchiri community, located near Cuzco, are currently working to rebuild a 30-meter Incan rope bridge that fell into disrepair during the pandemic, using traditional weaving techniques.

In the latest Palestinian uprising, the greatest accomplishment has been to demonstrate the actua...

The Many Reasons Erdogan Plays The Palestinian Card

Even as other Muslim leaders were treading more carefully on the Palestinian question, Turkey's l...