A man looks at the damaged wagons of a passenger train that derailed near the city of Toukh, north of Cairo in Egypt, killing at least 11 people and injuring nearly 100. - Sayed Hassan/dpa/ZUMA
WORLDCRUNCH
2020-04-19

Welcome to Monday, where Russia is warned of Navalny "consequences," Egypt's second deadly train crash in a month kills 11, and Mars gets its first ever helicopter ride. Le Monde also explores the feeling of deep injustice surrounding grieving, one year into the pandemic.

• Navalny to be transferred to hospital: Jailed Kremlin critic Alexei Navalny will be transferred to hospital according to the Russian penitentiary service. The pro-democracy activist is said to have lost 50 kilos after going on a hunger strike. Yesterday the U.S., France and Germany warned Russia against further sanctions if Navalny died in jail.

• 11 dead after train crashes in Egypt: At least 11 people were killed and 98 injured after four carriages of a train derailed in Egypt's province north of Cairo. Investigations over the second deadly rail accident in the country in a month have been ordered by President Abdul Fattah al-Sisi.

• Fire in Cape Town: A wildfire coming from Cape Town's Table Mountain National Park is spreading to the nearby University of Cape Town campus, badly damaging historic buildings and forcing hundreds of students to evacuate.

• Australia opens travel bubble with New Zealand: For the first time in more than a year, Australian residents are allowed to travel to New Zealand without having to quarantine.

• Mars helicopter breakthrough: NASA reports its Ingenuity aircraft flew above the Martian surface in the first powered, controlled flight on another planet. 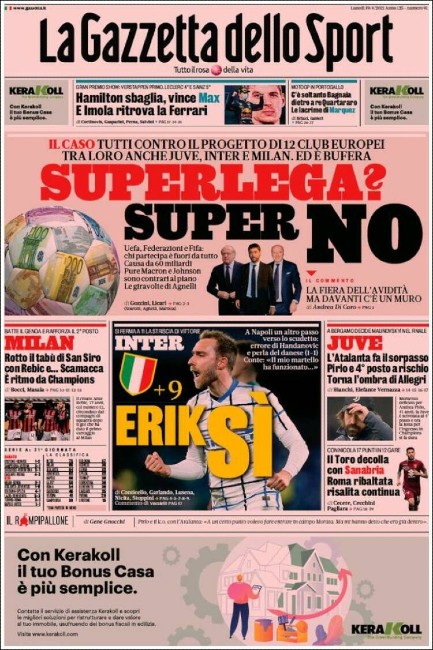 Italian sports daily La Gazzetta dello Sport opposes a "Super No" to the creation of a European soccer Super League, made of English, Spanish and Italian clubs. The UEFA warned that the clubs taking part in that breakaway league would be banned from all other competitions. Critics, including UK Prime Minister Boris Johnson, say this new league could destroy domestic leagues and runs counter to the integrity of sports.

Family members who lost a loved one in the early months of the pandemic, at the height of the restrictions, are now demanding a national day of mourning, reports Jérémie Lamothe in French daily Le Monde.

It has been a year and still the "anger," "anguish" and "feeling of injustice" resonate in Claire's voice. Her mother, Marie-Gabrielle, died in the spring of 2020 from COVID-19. She was in an isolated, long-term care unit in Charleville-sous-Bois, in northeastern France. What gnaws at Claire above all "is not having been able to say goodbye to her." At that time, France was going through its first weeks of full lockdown, with long-term care facilities and nursing homes closed to outsiders and visits forbidden.

This story echoes that of many families of COVID-19 victims from the beginning of the epidemic. Accompanying the dead in their final moments of life, seeing their face one last time and organizing a proper ceremony to remember them are essential steps in the grieving process. "But today there is an irreversible element felt by bereaved families who say to themselves: 'I am missing something, and this lack, we will not be able to fill it.'," explains Marie-Frédérique Bacqué, psychologist and professor of psychopathology at the University of Strasbourg.

A year has passed, but the health situation and the ever increasing death tolls spelled out each evening rekindles the pain for these families who feel they have been forgotten. To question the authorities and to help each other, they have formed an association called CoeurVide19. Created by Julie Grasset, who lost her father on March 25, the group has allowed her to regain "strength by finding people who have experienced the same thing." Together with Lionel Petitpas, who created the association Victimes du COVID-19 after the loss of his wife in March 2020, they are now asking for a national day of tribute to the deceased.

Swahili for "traffic jam," as the strict enforcement of COVID-19 curfew by Kenyan police around the capital Nairobi led to major roadblocks, causing uproar from the thousands of motorists (including essential workers) stranded in traffic jams over the weekend.

Austrian man gets reduced fine for "deliberately" farting at police

In Austria, they call it Darmwind — literally "bowel wind."

In June 2020, a man was fined 500 euros for intentionally letting one such Darwmind go at police officers approaching him for an identity check as he sat on a bench in a Viennese park. The Vienna Regional Administrative Court has now reduced the fine to 100 euros.

As Austrian daily Der Standard recalls, the deliberate flatulence — and the hefty fine that ensued — had made headlines last year, with international media catching wind of the affair. Police at the time had justified the inflated penalty by saying the suspect "had already behaved in a provocative and uncooperative manner" before letting her rip.

The individual had appealed the fine, arguing that the incriminated gas was merely a "biological process" that had escaped him. The suspect also argued that the targeted fart should be considered public criticism of police forces, and thus within "freedom of expression" rights.

Unconvinced by such a line of defense, the court responded that to fall within freedom of expression purview, a statement still had to convey certain "communicative content" — which, in the case of this "pure body stimulus," was not the case.

Ultimately, considering this was the man's first offense (as offensive as it may have been), the court decided to reduce the fine to 100 euros. So it seems that this singular story, as Swiss daily Le Matin concludes, is gone with the wind ...

There will be consequences if Mr. Navalny dies.

— U.S. national security adviser Jake Sullivan said during an interview for CNN, warning that Russia "will be held accountable" if jailed Alexei Navalny dies in custody. The health of the Putin critic has significantly deteriorated since he started a hunger strike to force authorities to provide him access to outside medical care.