Welcome to Thursday, where the UK has begun a trial of mixing vaccines, Facebook is blocked in Myanmar and German singles try to find love in the local supermarket. We also hear from a Belgian bioengineer working against the tech consensus of "smart cities."

• COVID-19 latest: Germany flies in doctors, ventilators, and beds to Portugal, which is battling a recent surge in cases and shortage of medical care. In Africa, the regional CDC finds that the death rate on the continent is 0.4% higher than the global average. COVAX, the UN-backed vaccine equity project has announced that it will be distributing 337.2 million vaccine doses globally by June. The UK has launched a trial to see if mixing different COVID vaccines could improve immune responses.

• Myanmar blocks Facebook: Attempting to quell organization of further protests against its coup this week, the military government blocked Facebook and other social media networks.

• Iran diplomat sentenced to prison: A Vienna-based Iranian envoy has been sentenced to 20 years in prison for planning to bomb a meeting of an exiled opposition group near Paris. It was the first trial of an Iranian official for suspected terrorism in the European Union since 1979.

• Find love at the supermarket: A German grocery store is dedicating Friday evenings to "singles shopping" for those struggling to find love behind masks and curfews. 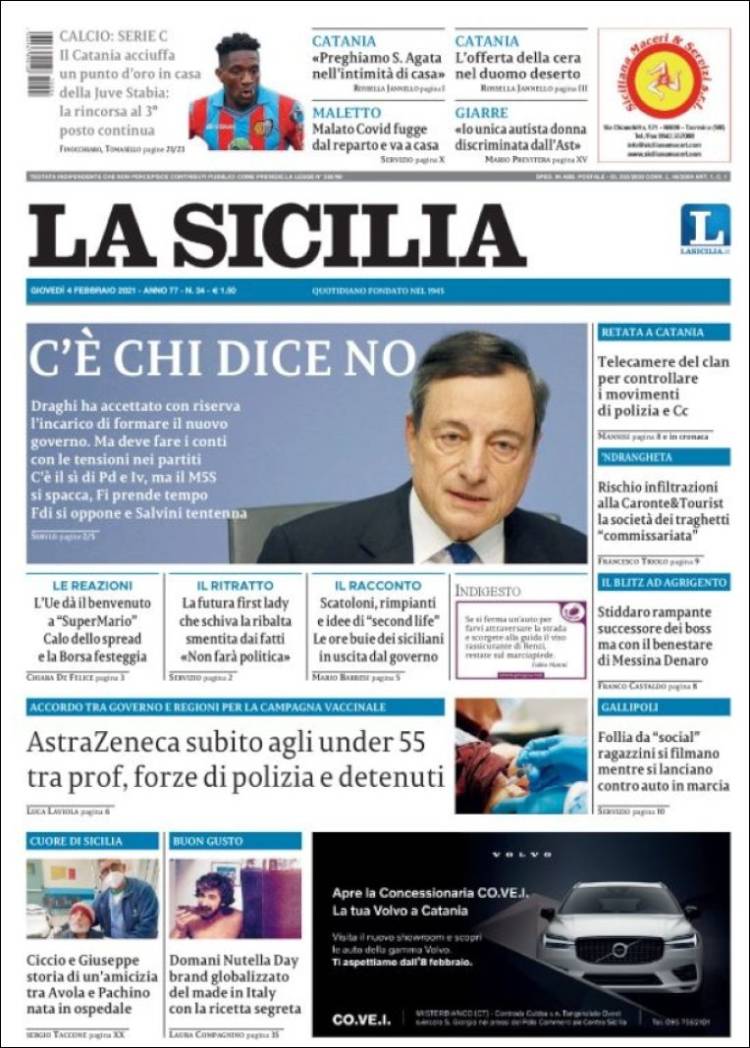 "There are those who say No," titles Italian daily La Sicilia as former European Central Bank chief Mario Draghi attempts to form a coalition technical government. Several political parties have indicated they will not support the government despite growing consensus that the 73-year-old is the best option to lead Italy through the health and economic crisis.

Smart cities won't save the planet: we need low-tech cities

The concept of smart cities is a kind of received wisdom among planners and technologists, but our digital world of today is not sustainable, writes bioengineer Jean-Philippe Lens in Belgian daily Le Soir.

The idea behind the concept of smart cities is to think about digital technology as vital to all the challenges posed by global warming, road congestion, air quality improvement or even biodiversity loss. The result? A multitude of sensors, screens and wifi hotspots colonize cities, connecting everything that can be connected. All kinds of objects from swimming pool boilers to war memorial spotlights, road traffic flows or the level of glass shards in recycling bins, and even trees.

The founding argument by the concept's advocates is that 70% of the world's population will live in cities by 2050. Yet such a vision is likely to have a colossal impact on the environment. While the connected city can certainly provide answers to future challenges, the low-tech city — a concept that's still largely absent in urban planning debates — can offer a range of solutions and technical innovations that are just as effective and much less energy-intensive.

For instance, rather than building an underground network of pipelines and stormwater basins equipped with sensors to monitor the level of runoff water at all times and manage its flow, the low-tech city only needs an overhead network of infiltration basins and temporary immersions basins. Not only is this solution cheaper and less energy-intensive, but it also helps to develop biodiversity and reinfiltrate rainwater into the water tables.

The almost aptly-named village of Barr, considered one of the wine capitals of eastern France, has been targeted by vandals who may have been making a political statement about pandemic lockdown measures. Last Saturday night, someone stole the final "R" from the main town sign, proudly standing on a roundabout near the famous Route des Vins, L'Alsace-Le Pays reports.

Mayor Nathalie Kaltenbach-Ernst launched a call on Facebook to find the missing letter. While she jokingly acknowledged that "everybody wants a piece of Barr." She also asked whether the act should be seen as "a subliminal message in favor of the reopening of bars" which have been closed for the past four months in France because of the COVID-19 pandemic.

If the letter is not found, the mayor lamented, the rest of the sign will just have to go, to be replaced with a new one. But the mayor said she was not planning on filing a complaint. In other words: No one should end up behind bars.

With 104.9 million vaccine doses administered around the world, there are now more people vaccinated against the coronavirus than infected (104.1 million cases). Israel is leading the world with 28% of its population vaccinated so far.

LGBT, there is no such thing.

— Turkish President Recep Tayyip Erdogan commented on this week's pro-LGBT protests in Istanbul, while also calling the demonstrators "terrorists." The wave of protests was originally sparked last month when Erdogan appointed a loyalist as rector of the prestigious Bogazici University, but took on a pro-LGBT tone in recent days after protesters were arrested for hanging rainbow flags near the new rector's office.