Welcome to Thursday, where WHO chides the EU's slow vaccination rollout, two of Hong Kong's best-known democracy leaders are convicted and Japan has a pricey solution for those missing airline food. Buenos Aires daily Clarin also has the scoop on the meat industry's beef with a former Beatle.

• COVID update: The world's second most populous country India starts mass vaccination campaign for people aged 45 and older, as the number of daily cases hits a record high. Brazil has detected a new coronavirus variant in Sao Paulo state, said to be similar to the South African variant. France is about to enter a third national lockdown, with schools closing and travel between different regions banned. Meanwhile, WHO calls the rollout of vaccines in Europe "unacceptably slow".

• California shooting: Four people were killed and two injured in a shooting in an office building near Los Angeles. An exchange of gunfire with the police left the suspect wounded. So far, no motive for the attack has been given by the authorities.

• Day 4 of Derek Chauvin's trial: A newly disclosed body-camera video displays Derek Chauvin's defending his actions after George Floyd left in an ambulance, with the Minneapolis police officer saying "he [Floyd] was probably on something" and needed to be under "control".

• Facebook removes Trump video: Donald Trump's daughter-in-law Lara Trump reveals that Facebook removed a clip of an interview with the former U.S. president from its platform. Trump has been banned from the platform, along with Twitter, since the insurrection at the Capitol, in early January.

• Google cancels April Fools for the second time: With much of the world still mired in the COVID-19 crisis, Google has decided not to make April Fools' Day pranks for the second year in a row. Worldcrunch, likewise, couldn't muster much new humor — but we can't resist sharing some archive footage of foolishness past. 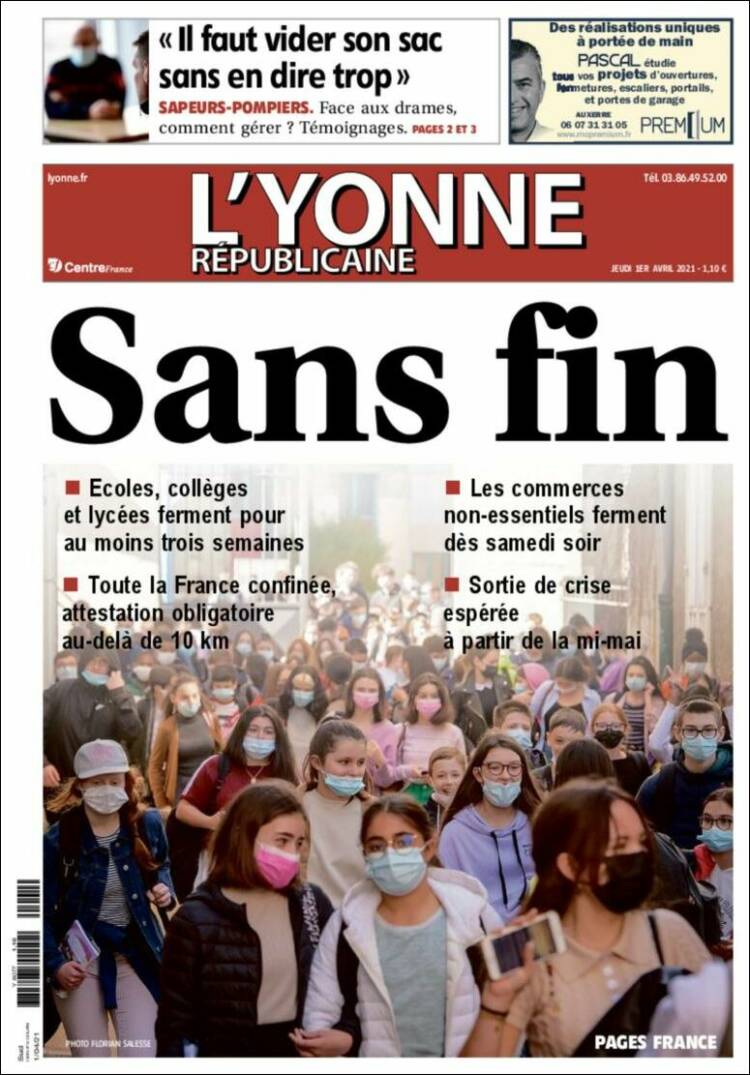 Argentina's meat industry has a beef with Paul McCartney

It goes without saying that beef is a big deal in Argentina, where barbecuing remains an almost sacrosanct pillar of social life. And yet, as of January, consumption has dropped to an historic low of 41 kilograms per person annually. Could it be that the rise of vegetarianism and veganism are taking a toll? Or could the former Beatles band mate Paul McCartney be to blame for that decline in the BBQ-loving country? asks Colombian daily Clarin.

That's the question Argentine beef lobbyists in what's known as the IPCVA, the meat industry's promotion institute, are asking, as this past January, former Beatles singer Paul McCartney wrote to Argentine President Alberto Fernández to ask him to join the Meat Free Monday initiative. To gauge the impact, IPCVA asked a sample population of 1,100 nationwide how they reacted to such actions on the part of environmental or vegan activists. The result? Seven out of 10 said that such campaigns did not lead to reduced meat consumption. Respondents found such actions ineffective, in other words.

Why, then, are Argentine's cutting back on beef? For money reasons, most likely. That, at least, is the conclusion of the IPCVA, which accuses pro-vegetarian activists of being unnecessarily divisive. Their campaigns merely add to the "the social divides we sadly have in our country," the institute deplores.

In this case, the lobby group argues, there's a "food divide," with people expressing their opposition to one another "in the way each of us manifests his or her way of eating."

Most of the poll's respondents effectively blamed vegans for feeding this gastronomic divide, accusing them of being more "narrow-minded" than meat eaters.

Caribbean frog hops on banana, flies to France — only banana is eaten

Perhaps it was looking to make a statement about the carbon footprint of the food industry, or maybe it was hoping to hop up the Eiffel Tower some day. No one will ever know why (or how) the tiny Guadeloupean frog clung to a banana for 6,400 kilometers to land in France, but the odd adventure ends well.

It begins with a student in Bordeaux who was about to bite into a banana she'd just bought at a local market, when she noticed a tiny semi-translucent creature on the peel. According to FranceInfo, the little-amphibian-that-could measures only 3 centimeters and is believed to be a Barlagne Robber frog, known as eleutherodactylus barlagnei. Commonly found in Guadeloupe, the tree frog has been listed as endangered by the United Nations' Environment Program (UNEP) since 1991.

France Info reports the Bordeaux-bound creature's life was "hanging by a thread." Yet kind locals went to great lengths to keep the courageous banana-rider alive. First, the startled student called Vénus, a local animal protection society, which didn't know how to take care of the exotic creature. A veterinarian working for the regional department for protecting local species finally found a specialist who adopted the little grenouille and named it Guaba. It's a heartfelt story of animal appreciation in a country where frogs found in grocery stores usually end up on someone's dinner plate.

Japan's biggest airline All Nippon Airways is offering $541 first-class dining experience aboard its planes, but on the tarmac — the latest in the industry's efforts to put its grounded fleet to use during the pandemic.

A bloodbath is imminent.

— During a close-door meeting, UN envoy Christine Schraner Burgener warns the Security Council of impending civil war in Myanmar, urging it "to take collective action and do what is right, what the people of Myanmar deserve and prevent a multi-dimensional catastrophe in the heart of Asia." The warning comes as rights organization Save the Children reports that at least 43 children have been killed by armed forces in the country since the Feb.1 military coup.