• COVID-19 latest: Iran begins using Russia's Sputnik V vaccine as part of the vaccination campaign, and the WHO-China team gives a joint press conference on their study of coronavirus in Wuhan. Meanwhile, South Korea begins testing on domestic animals in the capital city of Seoul. The White House has expressed concerns over the potential spread of the UK variant after photos of Super Bowl celebrations with maskless party-goers went viral.

• Myanmar military promises elections: Despite a new ban on gatherings of more than five people, demonstrators once again take to the streets, and riot police increased their use of force. The military government has called for elections, promising to render power to a "suitable" minister.

• Trump impeachment: As former U.S. President Donald Trump's second impeachment trial opens today, his lawyers say they will argue that he was not responsible for inciting the Jan. 6 assault on the Capitol, and that the trial itself is unconstitutional because Trump is no longer in office.

• Bitcoin heading to $50,000: After Elon Musk's investment in the cryptocurrency, more and more investors appear to believe Bitcoin is here to stay as its market value approaches $50k.

• Glacier disaster toll: Rescue efforts intensify in the Himalayas, as the confirmed death toll rises to 26, with 171 still missing after a glacier burst in northern India.

• Supremes singer dies: Mary Wilson, co-founder of Motown super group the Supremes, has died at the age of 76. 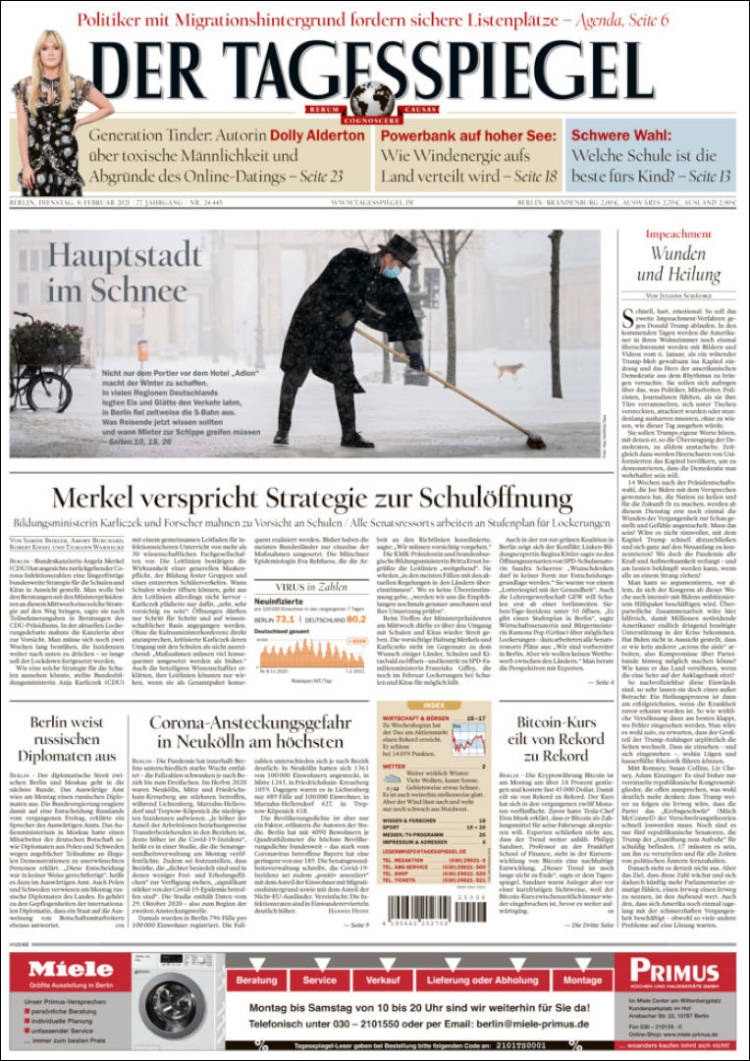 Berlin-based daily der Tagesspiegel features Germany's "capital under the snow" on its front page, as heavy snowfall slows down most of northern and central Germany.

Once part of the cocaine kingpin's private zoo, the animals are now an invasive species impacting the local environment. But few in Colombia have the heart to kill them off, write Natalia Pedraza and María Mónica Monsalve S. in Colombian daily El Espectador.

The story's been told before, and dates back decades. And yet, its relevance continues to grow — in a very literal sense — and presents Colombia with a real conundrum. We're talking about the handful of hippopotamuses that the notorious cocaine trafficker Pablo Escobar imported in the 1980s, for his private zoo. The drug lord was killed in 1993. But the huge herbivores lived on and made their way off the Escobar estate and into the nearby Magdalena river, where they have joyfully multiplied ever since.

The problem is what to do about the huge animals. They're an invasive species, yes. But they're also living, sentient creatures. Not surprisingly, the issue has fueled debate on networking sites, especially in response to the Biological Conservation study, which suggests hunting — in addition to castration and transfers — to curb their numbers.

Discussions on the ethics and politics of killing these animals reveal our differing perspectives on nature, and have effectively become a debate between defenders of animals and defenders of the environment, with nuances. One vision of nature is defending the "ecosystemic ethics," which place biodiversity and ecosystems above particular creatures. The other holds that "ethics are manifest in human considerations intended to avoid the suffering of sentient animals." In other words, why kill the hippos and make them victims of a human decision?

Starsky and Hutch busted in France for driving under influence

Starsky and Hutch on the wrong side of the law? It happened in France this weekend, and worse still: they were busted driving a Renault minivan …

The scene Saturday night at a police checkpoint in the small French town of Beautiran was vaguely reminiscent of the high-octane car chases of the iconic 1970s American TV detective series. Just swap the busy streets of Bay City, California, for the quiet, vineyard-flanked roads of southwestern France — and the trademark bright red, white-striped Ford Gran Torino for a family-friendly Renault Scénic. And yet as French as it all may seem, the names matched up …

Shortly after 10 p.m., upon seeing a police roadblock, a car with two men onboard refused to pull over and instead started accelerating, reported the regional Sud Ouest daily newspaper. After managing to shake the fuzz, the car showed up an hour later … on the same road, same checkpoint — only to be stopped this time by the gendarmes who managed to deploy their tire-deflating stop-stick bar.

In the car, two 30-something local brothers with the first names, Starsky and Hutch, on their respective identity documents. An odd choice of names for the parents in the land of Pierre and Jacques, which Sud Ouest traces back to when the U.S. series gained cult status in France in dubbed reruns through the 1980s and 1990s as Starsky et Hutch.

Police brought the brothers into the station on suspicion of driving under the influence and refusing to comply with police. Though there were no details on the color of either brother's hair, authorities confirmed that, yes, Starsky was behind the wheel.

➡️ Keep up with all the planet's police reports and plot twists on Worldcrunch.com.

Colombian President Iván Duque announced Monday that the country would grant temporary legal status to the 1.7 million Venezuelans who fled their country's collapsing economy. The migrants will be able to stay in Colombia for 10 years, provided they register with the authorities.

We will hand the power to the one who wins in that election, according to the rules of democracy.

— In his first national address since an army-led coup toppled the government in Myanmar last week, military leader Gen. Min Aung Hlaing said new elections would be held and promised peaceful transfer of power to the winning party.

Iranian Woman's 'Arranged Marriage' Is Scam To Rob Her In-Laws

TEHRAN — A 26-year-old Iranian woman suspected of more than a dozen thefts began by ...

Waiting For Biden To Take a Stand On Iran

The Biden administration's "contradictory" positions on Iran's nuclear dossier are making the Wes...