A worker refills medical oxygen cylinders at a charging station in New Delhi, India, where a surge in new cases has prompted an oxygen shortage. - Naveen Sharma/SOPA Images via ZUMA Wire
WORLDCRUNCH
2020-04-22

Welcome to Thursday, where India faces an oxygen shortage as COVID surges, Russia crackdowns on Navalny supporters and Italy nabs the worst slacker ever. We also turn to Le Monde for an analysis on what the killing of Chad President Idriss Déby means for the fight against jihadists in north-central Africa.

• India's COVID surge prompts oxygen shortage: The number of new COVID-19 infections in India has again hit a record, with 314,835 cases in the last 24 hours, amid a growing crisis of oxygen shortages and lack of hospital beds. The spike is being blamed in part on a double mutant variant first discovered in the country.

• Four killed in a Pakistan hotel bombing: A car bomb near a luxury hotel in Pakistan killed four people and left 12 wounded. China's ambassador to Pakistan, who was staying at the hotel but was unharmed, may have been the target of the attack claimed by the Pakistani arm of the Taliban.

• Missing Indonesian submarine: Indonesia has about 72 hours to find a missing navy submarine before the 53 crew members run out of oxygen. The vessel disappeared on Wednesday morning, about 100 kilometers (60 miles) north of Bali.

• Australia scraps deals and provokes China's anger: Australia has cancelled business agreements tied to China's Belt and Road initiative. The Chinese embassy in Canberra has warned about degradation in already tensed relationships between the two countries.

• U.S. green pledge on Earth Day: Joe Biden has announced plans to cut the country's emissions by at least 50% in the next ten years. The U.S. president made the announcement during a virtual climate summit hosted by the White House, with 40 world leaders participating, as the world celebrates Earth Day. 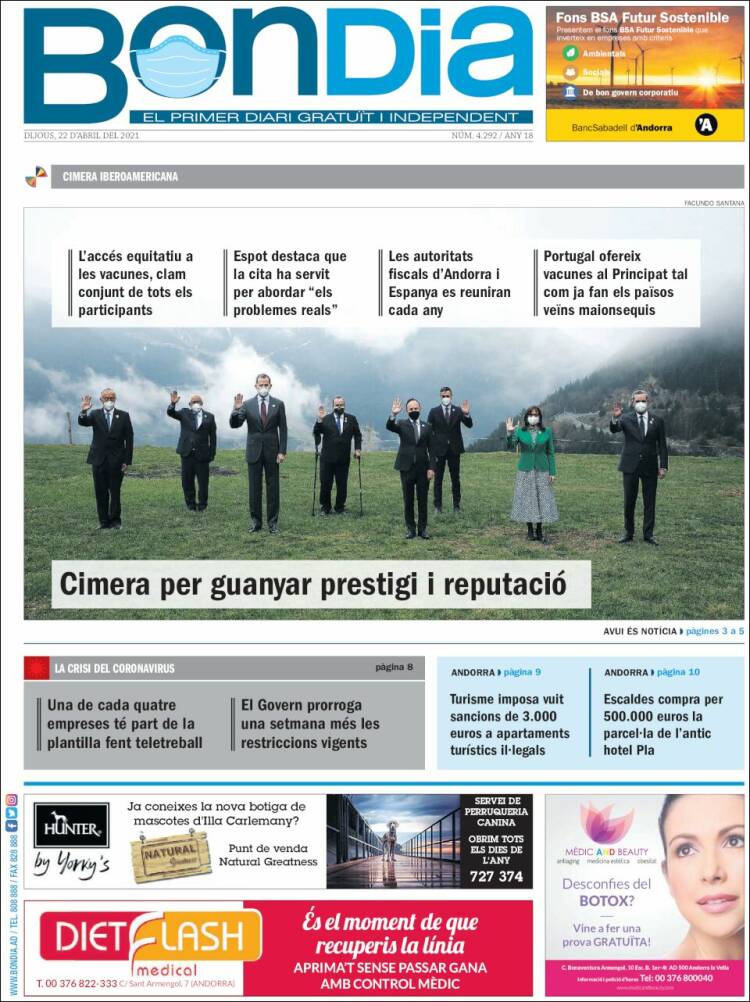 Andorran daily Bondia reports on the Ibero-American Summit in Andorra, which gathered representatives of 22 countries from Latin America and Europe's Iberian Peninsula. The leaders (gathered mostly virtually, though some were able to attend in person as evidenced on Bondia's front page) called for more equitable access to COVID-19 vaccines, as well as more flexible funding to overcome the current economic crisis.

Rescue efforts are underway to find the 53 crew members of the KRI Nanggala (402), a submarine of the Indonesian Navy that went missing yesterday during a drill north of Bali. The submarine is named after the Nanggala, a mythological spear belonging to the Hindu god Balarama.

Paris has considered Chad's army to be the most solid, experienced and tenacious in the region. But the death of Idriss Déby could change the dynamics in the French-backed fight against jihadists in the Sahel region of Africa, reports Elise Vincent and Morgane Le Cam in Paris-based daily Le Monde.

The strategists of Operation Barkhane could not have imagined worse news. The announcement Tuesday of Chadian President Idriss Déby's death as a result of his wounds "on the battlefield" has stunned the French military. This authoritarian leader, who has been in power for more than 30 years, had been their main ally in the fight against terrorism in the vast Sahel region of north-central Africa. And now, this key player in a protracted war that began in 2013 is gone.

As soon as France launched the regional anti-jihadist Operation Barkhane in 2014, Chad hosted its main command post. Since then, it is from the capital of N'Djamena that most of the actions on the ground are centralized and coordinated. Chad has also always been the largest contributor to the G5 Sahel joint force (about 1,850 soldiers out of 6,000). This military coalition composed of troops from Burkina Faso, Mali, Niger, Chad and Mauritania have been supporting the French military since 2017.

At this stage, observers are divided on the consequences that Idriss Deby's death could have on Chad's military commitments in the region. Some, such as Remadji Hoinathy, a researcher specializing in this country at the Institute for Security Studies, a South African think tank, forecasts "a period of uncertainty." A West African diplomat adds: "Chad's first reflex will be that of internal security above all." If Chad winds up reducing its security commitments, this would pose a problem, particularly in northern Mali.

A World Food Program study warns that an additional 3.4 million people in Myanmar will struggle to afford food in the next three to six months, in the wake of the February military coup. An estimated 2.8 million people already face hunger in Myanmar.

I hope no one gets the idea to cross the so-called red line with Russia.

— Russian President Vladimir Putin said during his annual state of the nation address, amid growing tensions abroad over Ukraine and jailed opposition leader Alexei Navalny. "The organisers of any provocations against Russia will regret [their actions] in a way they never have before," Putin warned.