Thousands of protesters continue to demonstrate against the military coup in Yangon, Myanmar - Santosh Krl/SOPA Images via ZUMA Wire
WORLDCRUNCH
2020-02-23

Welcome to Tuesday, where the global COVID death toll nears 2.5 million, El Chapo's wife is arrested and Facebook and Australia are friends again. Le Monde also explores the impact of Lebanon's diaspora in Africa on a small village near Beirut.

• COVID-19 latest: After two separate studies find that COVID vaccines significantly reduce the risk of infection after just one dose, the UK has announced a roadmap for easing lockdown restrictions. The strain first found in South Africa has been detected in New York, and Kuwait closes its borders amid a spike in cases. Meanwhile the death count in Brazil edges toward 250,000, and the worldwide toll nears 2.5 million dead.

• El Chapo wife arrested: Emma Coronel Aispuro, 31, wife of drug kingpin Joaquín ‘El Chapo' Guzmán, who is currently serving a life-sentence, has been arrested in the U.S. for allegedly participating in drug-trafficking operations as well as plotting to help her husband escape prison in Mexico in 2015.

• Facebook re-friends Australia: Mark Zuckerburg will restore Facebook pages in the coming days after the government offered to make amendments to the proposed laws that would force major tech giants to pay for news content.

• Daft Punk splits: In a new video on YouTube, the legendary French techno music duo has announced it is breaking up after 28 years.

• Scottish woman takes a bite...?: During a brawl with a stranger, a Scottish woman aggressively kisses a man, bites off his tongue and spits it on the ground. Authorities told an Edinburgh Sheriff Court last week there was missing evidence: a seagull had swooped down and ate the tongue. 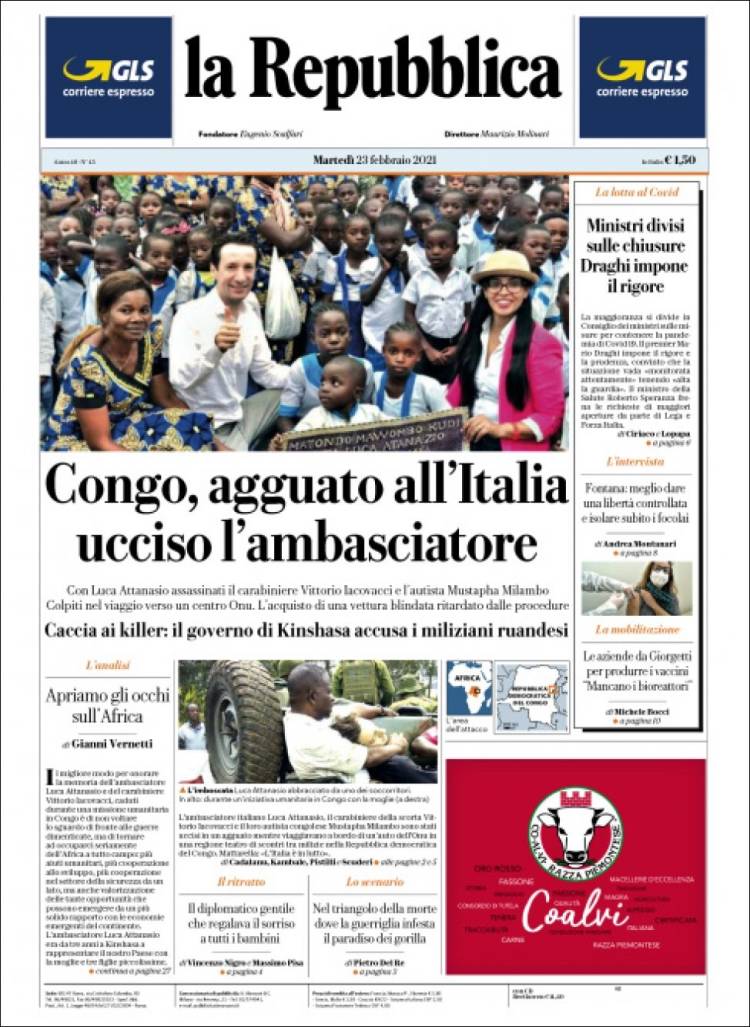 Italian daily La Repubblica reports the death of Italy's ambassador to the Democratic Republic of Congo, Luca Attanasio, 43, who was killed in an attack on a World Food Programme convoy. Rwandan Hutu rebels have denied allegations they were behind the attack.

Lebanon is famous for the extent of its diaspora. In Zrariyeh, nearly a third of the 15,000 registered voters live in Côte d'Ivoire. There are also many families living elsewhere in Africa, Europe or the United States. "Our diaspora in Africa has ensured the development of the village," says Adnane Jezzini, the president of this municipality. "For the past year, some inhabitants have really depended on the financial support of their relatives [emigrants] to live."

"Money from abroad plays the role of a shock absorber for our society. It is true here, and for all Lebanese families who have someone who has emigrated," says Mohamed Mroué, a former resident in Abidjan. In this country, the support of the diaspora probably explains in part why hyperinflation, coupled with the collapse of the local currency, hasn't yet led to a social conflagration.

Sending money, however, has become more complicated. The Lebanese living in Africa have lost confidence in Beirut's banks. For the past year, their savings have been frozen there, like all deposits from ordinary customers. In addition, "People in the South [of Lebanon] feel like a sword of Damocles is hanging over their heads because of the U.S. sanctions against Hezbollah, even though they and their people have nothing to do with the party's finances," says Mroué.

A good workout leaves you feeling the burn, but a parkour-style stunt in China could have wound up sparking disaster — and ultimately part of a mega-city blacked out.

It began Sunday night in Chengdu, the central Chinese capital of Sichuan Province, when a 22-year-old man climbed an electric pole to do sit-ups. His gym was too crowded? A search for extra "energy"? A gut instinct to gain celebrity status? Well, no word on the motivation...

The ambitious climber-cruncher finally descended, uninjured. Still, for extra precaution, the local electric company cut power to tens of thousands in Chengdu, with a population of over 16.3 million.

A video of the incident quickly spread on the Chinese social media site Weibo. In the clip (which has so far garnered more than 1.7 million views), the unnamed man can be seen suspended about 10 meters above the ground, feet holding on to the electric pole.

"I was annoyed because we had no electricity, and when I watched the news and found out why I felt annoyed and amused at the same time," said one Weibo user, as reported in Shine.

Reddit has recently released its 2020 Transparency Report, showing the number of requests from countries requiring the platforms to remove content or disclose private user data. Russia comes on top of the list with 89 removal requests in total, followed by South Korea (60), Pakistan (33) and India (23).

There is no so-called ‘genocide' in Xinjiang at all.

— Cong Peiwu, China's ambassador to Canada, said in response to the Canadian parliament's decision to pass a non-binding motion that declares China's treatment of its Uighur minority population a genocide. The motion makes Canada the second country after the United States to classify the country's actions as a genocide, though Prime Minister Justin Trudeau and most members of his cabinet abstained from voting.

Welcome to Tuesday, as COVID cases worldwide rise for the first time in seven weeks, a former ...