Welcome to Monday, where fresh clashes rock Jerusalem's mosque, death toll in Kabul school bombing tops 60, and Dracula sinks his fangs into COVID. We also look at the risks that go along with all the gung ho talk of the New Space Race.

• Clashes escalate in East Jerusalem: A new round of clashes have erupted between Palestinians and Israeli police outside al-Aqsa mosque in Jerusalem, leaving more than 200 injured, ahead of a planned Jewish nationalist march marking the capture of East Jerusalem.

• Kabul school bombing toll tops 60: The attack on a secondary school in the Afghan capital on Saturday killed more than 60 people, most of them girl students. No organization has claimed responsibility for the attack, but the Afghan government has blamed the Taliban.

• New wave of migrants risking lives land on Lampedusa: At least 15 boats carrying an estimated total of 1,400 migrants landed on the Italian island of Lampedusa on Sunday.

• Chad military declares victory over rebels: Chad's transitional military authorities have claimed victory in its battle against northern rebels that led to the death of former President Idriss Deby.

• Small whale freed in London: A small whale has been freed after it became stuck along the river Thames. The four-meter whale is now being examined and might be released soon. 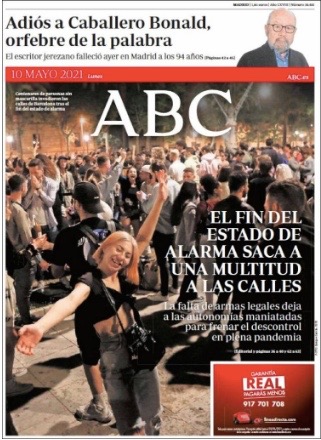 Spanish daily ABC features people celebrating outside the end of the country's state of alarm and emergency measures which had been in place for six months.

With more and more state and private entities setting their sights on space, Europe will need to assert itself, but in a safe, responsible way, writes former astronaut and author Patrick Baudry in French daily Les Echos.

Never before has the adventure of space travel attracted so many players, from states to private companies. And no longer is there just one space-race, but many, and much of it driven by the private sector, a movement sometimes referred to as NewSpace. There's the lunar base, the conquest of Mars, new orbital stations, manned space flights and mega-constellations of satellites. The latter are particularly problematic, as companies all want their satellites in low orbit to provide high-speed connection, power the Internet of Things, and provide observation services.

Last year, EU Commissioner Thierry Breton announced the launch of the bloc's own mega-constellation project. But to meet this challenge, Europe will have to change its space economic model, by reducing the cost of its launch vehicles, developing its own processes to manage space traffic and debris, and working more effectively with start-ups. This industrial gamble can only succeed if Europe tackles another equally difficult challenge: establishing responsible operating and regulatory standards within low earth orbit.

In the absence of rules to better anticipate and manage these risks, our near-Earth space could turn into a new sword of Damocles above our heads: a new environmental, technological and industrial trap. Rules should be preventive. Among other things, operators of mega-constellations must be required to assess the environmental impact of their projects.

Prevention is crucial in a sector where finding fixes — such as the collection of debris — is astronomically expensive at best and improbable at worst.

Romania's Bran Castle, the inspiration for Dracula's castle in Transylvania, is offering a different kind of intepatura, or "sting", as it has been turned into a COVID-19 vaccination center, providing Pfizer BioNTech jabs to weekend visitors.

An Iranian man who divorced his first wife over her "secretive" use of Instagram is now seeking to end his second marriage for the same reason.

Tehran-based Shargh daily cited the anonymous man from an unnamed city as admitting he had a "good life" with his first wife, until he found she was on Instagram without his knowing.

The Shargh article of May 6 reported that the discovery of the social media activity, and subsequent divorce, left the man "in shock for a few months ... I came to hate online networks."

After meeting his current wife, he said she agreed to marry under his stated condition that she avoid all social media. He told the daily, "We had no differences," until his wife "broke all her promises. She once told me she would like to open an Instagram page. I reminded her she was not allowed to do that." She did anyway, and after noticing "suspicious behavior," the man used a friend's Instagram account to find hers. The man said he would end this marriage too as his wife "had made me distrust her."

Azar Hadipur, a family counselor working with police in the province of Qazvin to the west of Tehran, told the newspaper that social networks had affected "practically all societies in recent years" and their "misuse" was harming couples. She suggested families shouldn't necessarily shun these platforms, but learn to use them properly.

Divorce law in the Islamic Republic of Iran are based on Sharia, and a woman can only seek divorce with a judge's order, while a man can get divorce by declaring it verbally. Estimates are that some 20% of Iranian marriages end in divorce. In the case of this one husband, twice a wife had to choose between him and social media. And twice, the wives made their choice. One is left asking: Is it social media, or the husband?

A basketball jersey worn by Michael Jordan during his 1982-83 season at the University of North Carolina sold at auction for $1.38 million.

Welcome to Friday, where an Amnesty International report accuses China of "crimes against ...