Farmers in India continue to protest against the government's contentious agricultural bills while the country today celebrates its 72nd Republic Day. - Imago/ZUMA
WORLDCRUNCH
2021-01-26

Welcome to Tuesday, where drug companies are being called out for vaccine delays, Italy slips into a political crisis and a special lion is born in Singapore. We also look at the rise and fall of Uber in Egypt.

Why local history matters in a globalized world

History, as it takes place on the local level, is more than just a precious heritage. It also reflects the multiple visions that our societies need to remain healthy and vibrant, writes Reinaldo Spitaletta in Colombian daily El Espectador.

Universal history always begins at some forgotten point on earth. In a village, perhaps, one that was crossed hundreds or thousands of years ago by the first camels bearing silk from faraway lands. Or in another dot on the map, a place where real flesh-and-blood people live through Shakespearean dramas even though they'll never see any of the Bard's tragedies.

Local histories are the seeds of the universal ones. On happy occasions, the world may come to read some of them, like the lives of Dostoevsky's Karamazov brothers and their relations with their father, or the changing fortunes of a family, cousins and all, in World War II. Natalia Ginzberg did just that, depicting people's travails in parts of Italy under fascism in the 1930s and the subsequent world war.

These days, in this period of capitalist despotism and globalization, local cultures may be trampled on, despised, or even disappear from view. What do we know of dancing rituals in Papua New Guinea, or of the fate of the vaDoma, the people in Zimbabwe with missing toes? The rule today is for a universal dumbing down. That, along with dominance by one culture.

What do we know of the "terrible redeemer don Jerónimo Rubio" in Mexico, known in his time as the Black Hand? Not a week passed without his hanging someone in a village. Or of the blacks who spoke Wakamba in Ernest Hemingway's Short and Happy Life of Francis Macomber? Perhaps nothing. And who cares, you may ask?

And what about the Cristero, the 1920s Catholic rebellion in Mexico? In that case, we remember a bit more, thanks to novels like Graham Greene's The Power and the Glory. And that's a good thing, because local history matters. In fact, safeguarding these historical memories is crucial in these times of popular anxieties and power excesses, because so often these stories are downplayed, if not ignored or buried to allow a single, official version to prevail.

The book San José de Gracia: Mexican Village in Transition, by Luis González, is the story of a small pueblo in the eastern state of Michoacán. Its problems, we read, "never go beyond the horizon," yet they are the problems of an entire country, in this case Mexico.

Local life, furthermore, isn't just the primary source of literature and history. It's a binding element of national cultures. Local histories are a weapon against oblivion or indifference, as José Saramago suggested. From a single window, one can view the universe. The poet Emily Dickinson did. The novelist Franz Kafka would also agree.

"You don't need to leave the house," Kafka observed. "Stay at your desk and listen. Don't even listen, just wait, nor even that. Just remain absolutely quiet and alone. The world will appear so you can unmask it. It cannot help itself. And it will bend before your gaze."

The protection and promotion of local histories is essential in a country like Colombia, rich in regional cultures. This is to avoid the single, hegemonic vision that mirrors wealth and power; to serve as a counterbalance to the "correct" opinions that some ex-presidents tout to perpetuate their spell over the country. Local history provides infinite possibilities for recognizing the hidden situations that are the stuff of magic realism or the Thousand and One Nights.

There should be a history center in every village and district: an organization, independent of authorities, in charge of researching and rescuing memory. It should record myriad tales and anecdotes on schools, rituals and beliefs, the shenanigans of notables, festivals and more. This is the micro-history that conveys imaginations and rescues symbols, builds identities and forges territorial attachment.

In a time of neocolonial globalization, this would be a beautiful way of relating the universal history hidden in every locality, and saying, "Give me a village, and I'll tell you about the world."

• COVID-19 latest: Protesters clashed with police in the Netherlands for a third straight night over the new coronavirus curfew, with at least 150 arrests for violence and vandalism. The European Union has issued a threat to pharmaceutical group AstraZeneca over its inability to meet contractual Covid-19 vaccine delivery commitments. New Zealand says it may shut its borders for most of 2021.

• White House present and past: U.S. President Joe Biden overturns two different orders by former president Donald Trump's to ban transgender people in the military, the Senate confirms Janet Yellen as the first woman to lead the U.S. Treasury Department, and the House of Representatives delivers articles of impeachment to the Senate against Trump, citing "incitement of insurrection," with the trial expected to start Feb. 9.

• Italian political crisis: Italy's Prime Minister Giuseppe Conte will announce his resignation today, one week after he survived votes of confidence in parliament, over disagreements on how to spend Covid-19 relief funds. This will result in an upset in the parliamentary balance. Italians would need to vote to form a new government.

• Farmers protest in New Delhi: On India's Republic Day, protests have turned violent in the capital as farmers demand the repeal of new farm laws that would effectively eliminate their means of financial security through minimum support prices and wholesale. 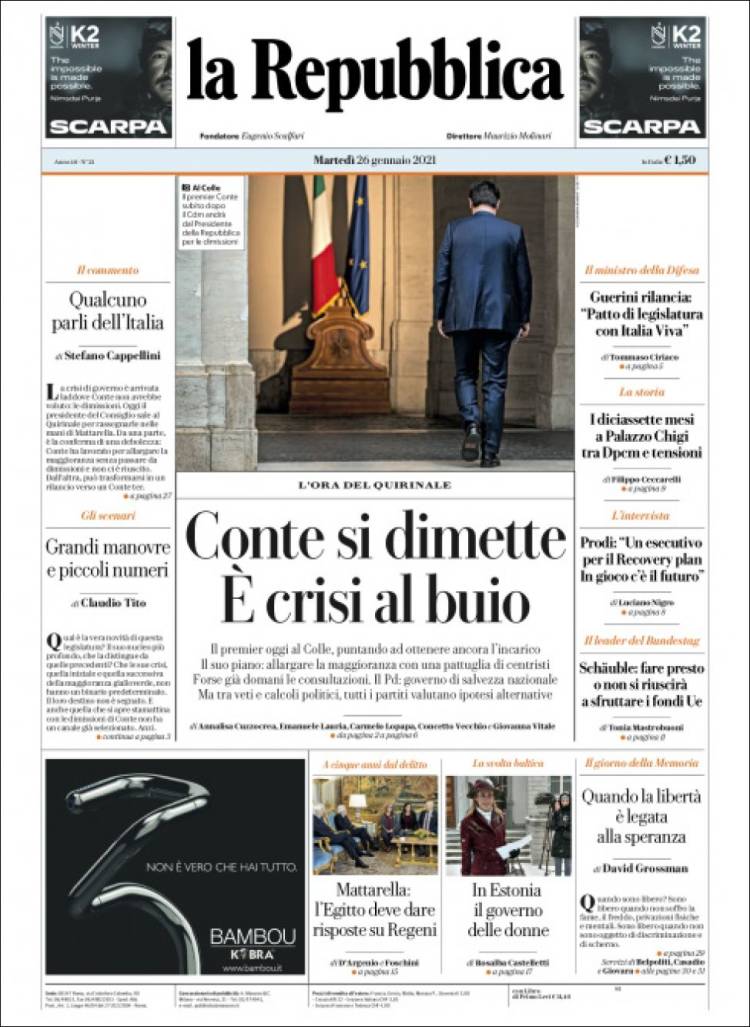 Italian daily La Repubblica devotes its front page to the resignation of Prime Minister Giuseppe Conte, who hopes to form a new government after losing his majority in the Senate last week.

How Egypt fell in and out of love with Uber

Uber launched with a bang in Egypt in 2014, promising work and new income for a country struggling with unemployment. But the castle of sand has disintegrated, leaving a trail of debt and frustration, reports Omaima Ismail in Mada Masr.

Uber launched its operations in Egypt in 2014, with only 12 drivers. By 2020, approximately 200,000 people from varying socioeconomic backgrounds and levels of education, attracted by the flexible hours and the apparent autonomy, were driving for Uber. But, in the past two years, workers say they've seen their income slashed through company policies and an increased number of arbitrary terminations.

For Amr Adly, a political economy professor at the American University in Cairo, the Uber model was met with such optimism because, with limited capital, it carved out a market that had not existed before, and one that engaged a large number of previously unemployed individuals by bringing advanced technology to unskilled labor. But "that optimism was premature," he says.

Uber's financial framework, Adly explains, shows that the model cannot handle competition. It allows for only a very thin profit margin, and so the existence of multiple competitors leads to financial crises. This is what happened with Uber in China, where the company was driven out of the market by competitors. Uber compensates for this by monopolizing entire markets where it can, which is what happened in Egypt. With less competition, the company is able to pressure drivers to accept less favorable terms.

According to a United Nations report, the pandemic has destroyed the equivalent of 225 million full-time jobs in 2020, an "unprecedented" hit to the global economy. "This has been the most severe crisis for the world of work since the Great Depression," said the International Labor Organization director-general Guy Ryder.

The rest of the world simply poses too great a risk to our health and our economy.

— New Zealand Prime Minister Jacinda Ardern announced that the country's borders will probably stay shut for most of 2021, as COVID cases continue to rise worldwide.

Top Milan Welfare Official: "No Rush" To Vaccinate Those Over 80

For Leitizia Moratti, head of welfare policy in the Lombardy region and former Milan Mayor, it wa...