Welcome to Wednesday, where Brazil and India both hit grim COVID records, Sudan clashes kill dozens and a French judge fake-marries her ex to prevent him from getting hitched. Egyptian online newspaper Mada Masr also looks at the problems behind the country's overcrowded vaccination centers.

• COVID-19 update: Brazil passes grim new threshold with over 4,000 daily deaths linked to the virus. The Indian government imposes new curbs as COVID-19 cases hit a record high of almost 116,000 cases in 24 hours. A new study suggests that people diagnosed with COVID-19 in the previous six months were more likely to have longer term mental health or neurological symptoms.

• Amnesty warns Russia may be "slowly killing" Navalny: Amnesty International says Russia may be slowly killing Russian opposition leader Alexei Navalny. Jailed since February, Navalny has been on a hunger strike for more than a week to protest prison officials' refusal to provide him with medical care.

• Iranian cargo ship targeted: The Saviz ship, believed to be a base for the paramilitary Revolutionary Guard, was attacked in the Red Sea by an explosive device. The incident coincides with Iran resuming nuclear talks with world powers in Vienna.

• Turkey to withdraw from domestic violence treaty: European leaders have called out Turkish president Recep Tayyip Erdogan over his decision to withdraw his country from the Istanbul Convention, a treaty that deals with preventing violence against women.

• Rwandan genocide reckoning: France opens its archive to the public on the 27th anniversary of the 1994 genocide. A report commissioned by President Emmanuel Macron concluded that France had a "overwhelming responsibility" for the genocide that killed over 800,000 people. 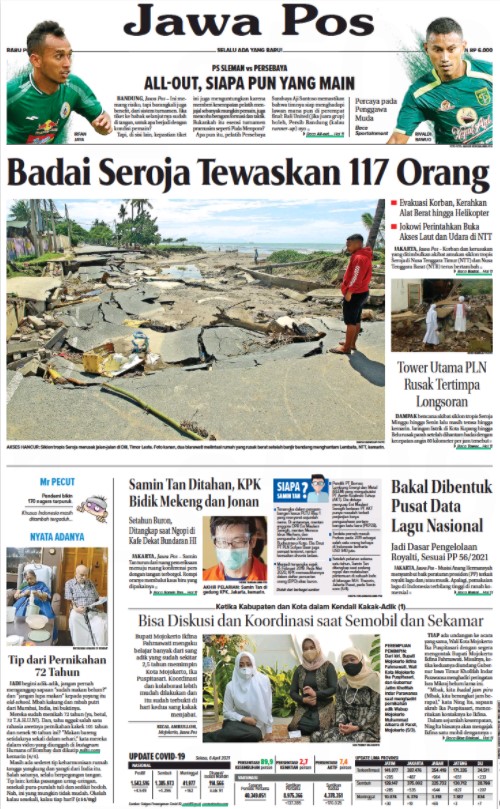 "Hurricane Seroja Kills 117 People," titles Indonesian daily Jawa Pos as the country gets hit by one of the most destructive storms in years. Dozens are still missing following floods and landslides caused by torrential rains.

In Egypt, long lines and mixed message as vaccine roll out sputters

Only about 150,000 of Egypt's 100 million people have been vaccinated so far against COVID-19, and in some crowded health centers, people wait hours only to be turned away, reports Egyptian online newspaper Mada Masr.

Vaccine centers across Egypt have witnessed long wait times, insufficient supply and bureaucratic procedures that have made it difficult for many to secure shots to boost their immunity against COVID-19. Vaccine rollout began to wider populations, including the elderly, in early March, and more than 600,000 of Egypt's roughly 100 million people have registered to get COVID-19 vaccines. As of April 4th, 148,987 people, including medical staff, have been vaccinated.

The focus on the eligibility criteria was part of the problem at the Matareya Universal Health Insurance Clinic in Cairo, where about 200 people eligible for the vaccine due to their age or due to having chronic diseases waited four to six hours on last week to receive COVID-19 vaccines, a Mada Masr correspondent observed. Tensions rose as those set to receive the vaccine complained to the center's employees about the long waiting and last-minute demands for proof of diagnosis. "Are we supposed to get vaccinated against coronavirus or to catch it?" one person waiting in line asked.

In a statement issued last week, the Health Ministry placed the blame for the crowding on citizens, saying that people had failed to show up to receive their shots on the dates specified for them. But the Ministry also took steps to alter its vaccination plan, announcing that it designated an additional 200 new clinics to administer the shot, doubled the number of medical teams working at vaccination centers nationwide, increased the clinic operating hours and capped the number of citizens who can be vaccinated at one clinic at 100 per day.

Souad Meslem, a 59-year-old French judge, faces up to 10 years in prison for allegedly using her legal authority to orchestrate a sham wedding to prevent her ex-partner from getting married.

The romanesque folly, as a fellow magistrate called the whole affair, had started off so well back in 2017, Le Monde reports. Meslem and her partner were about to move together to La Réunion — a heavenly island and French overseas department in the Indian Ocean — after she had been nominated assistant public prosecutor of the Court of Appeal of Saint-Denis de La Réunion. Meslam would move first, and her partner and father of their four children would join her there a few weeks later.

But he never showed up, announcing instead that he wanted to break up after 28 years together after he had fallen in love with one of their mutual friends.

It was too much for Meslem, who feared the pair would marry. She devised a detailed plan to sabotage her ex-partner, which became "an obsession," according to a senior judicial official quoted in Le Monde.

She stole his passport, made a copy and got access to his birth certificate. With these precious documents, Meslem began to meticulously organize the wedding for March 5, 2019. She published the official announcement, booked a slot at the town hall for the ceremony and even bought a plane ticket for her ex-partner's brother who she'd recruited as the stand-in groom. The jilted mother also convinced her eldest daughter to sign the official documents as a witness for the groom.

It was only a few months later that the "lucky guy," a lawyer himself, found out through colleagues that he was officially married to his ex. Meslem, who had come back to mainland France, had just been appointed vice-president of Colombes local tribunal, a suburb west of Paris, in September 2019.

Meslem was arrested two months later near Paris, and was later charged by an examining magistrate, in Versailles, for "forgery and use of forgeries in public writing, undue obtaining of administrative documents and use of forged administrative documents by a person holding public authority." She was placed under legal supervision, and suspended from her post for "failures in her duties of legality, probity and integrity."

While Meslem could face a ten-year sentence on mainland France, the court back on the island of La Réunion has launched proceedings to annul the bogus wedding.

House prices are surging in New Zealand, now one of the world's most unaffordable property markets, with an increase of nearly 23% over the last 12 months, taking the national median house prices to NZ$780,000 ($548,000). The country was one of the first developed economies to show signs of recovery from the pandemic and the stimulus measures coupled with historically low interest rates have stoked an already-strong housing market, driving up values.

It's a biological Fukushima.

— Miguel Nicolelis, a Brazilian doctor and professor at Duke University, has compared the spread of COVID-19 in his native country to "a nuclear reactor that has set off a chain reaction and is out of control."