Welcome to Wednesday, where Brazil hits a grim new COVID record, a rocket attack targets Iraqi base hosting U.S. troops, and a Japanese billionaire is looking for people to join him on a trip to space. Die Welt also asks why Morocco is beating Germany and the rest of Europe in the vaccination race.

• COVID-19 latest: Brazil breaks its single day record for Covid-19 deaths that had been reached in July, with the current toll blamed on bad government policy and the spread of a new local variant. U.S. President Joe Biden announces that all American adults will be able to be vaccinated by May. Meanwhile, Austria and Denmark are giving up on the EU vaccination pact and will turn to a partnership with Israel to score additional vaccines.

• Myanmar coup: At least six more people were shot and killed as security forces opened fire again on pro-democracy protesters. The junta also detained half a dozen journalists. Drama is brewing over who will represent Myanmar at the United Nations after Myanmar's U.N. Ambassador Kyaw Moe Tun denounced the coup and asked for help in restoring democracy.

• Rockets hit Iraq base: Ten rockets have hit an Iraqi military base hosting U.S. troops. It is not yet known if there are any casualties, and nobody has claimed the attack.

• Dr. Seuss gets cancelled: In the face of concern about racial insensitivity, six books by legendary children author Dr. Seuss will no longer be published. The late author has been accused in the past of racism and anti-Semitism, and his publisher said the books that have been pulled portray "people in ways that are hurtful and wrong."

• Women journalists killed in Afghanistan: Three female radio and television journalists in Jalalabad were killed and a fourth woman wounded in a targeted attack. ISIS later claimed responsibility for the attack.

• France/Algeria diplomacy: French President Emmanuel Macron officially recognized, on behalf of France, the torture and assassination of Algerian lawyer and activist Ali Boumendjel during the Algerian War of Independence in 1957. The French army had long disguised it as suicide.

• Free trip to space: Japanese billionaire Yusaku Maezawa is inviting 8 members of the public to join him for free for a trip around the moon on Elon Musk's SpaceX flight. 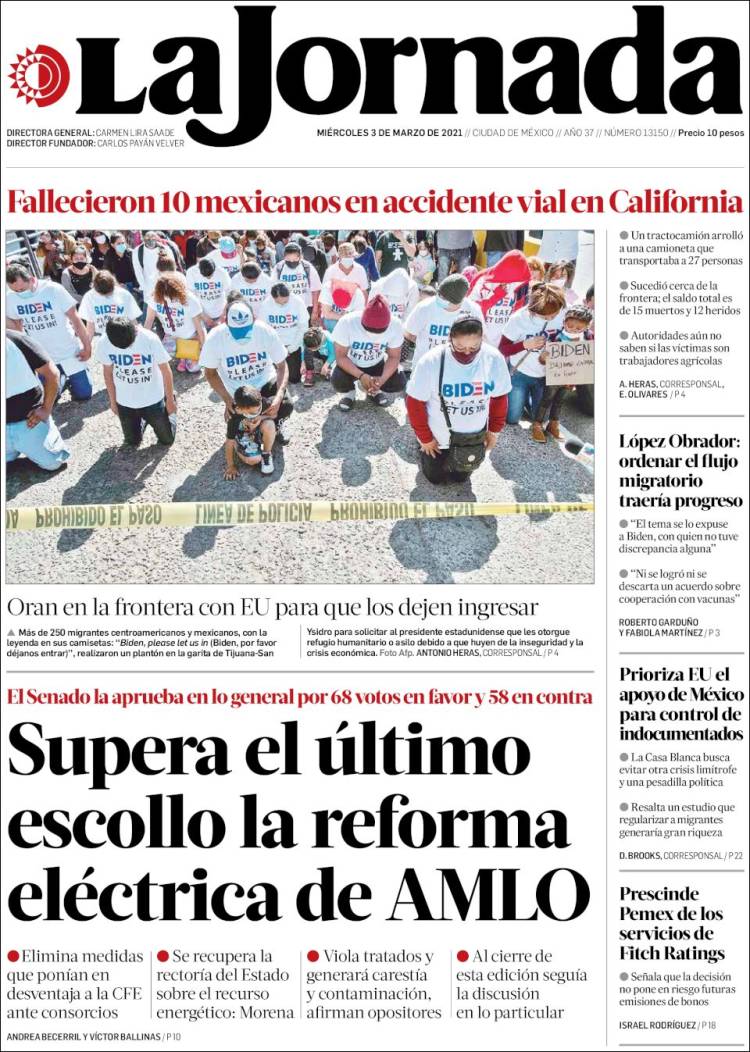 Mexican daily La Jornada features some of the 250 migrants from Mexico and Central America who organized a sit-in on the U.S. border in Tijuana to ask President Joe Biden to grant them asylum.

Why Morocco is so much faster than Europe in vaccination race

The North African country was quick to react when COVID-19 first showed up and is now outpacing most of Europe in the rush to immunize its citizens, writes Alfred Hackensberger in German daily Die Welt.

Getting vaccinated has been made very easy for Moroccans. There are no hotlines to call or letters delivered by post. People send a text with their national ID number and a few seconds later they receive a message with a venue and appointment time. It couldn't be simpler. So far, 2.5 million Moroccans have had their first vaccination, in one of 2,888 centers. The aim is to vaccinate 80% of the adult population, which is 25 million people. If everything goes to plan, that could be achieved by the end of May.

The successful vaccine campaign shows once again that Morocco's crisis management is robust. The country did experience a second wave in summer, but managed to control it through a clear strategy of time-limited measures, isolation and hygiene, all while placing a high level of trust in the population. Now the Moroccan Ministry of Health is registering fewer than 500 new infections per day, and around 10 deaths.

Morocco's success speaks for itself. But one tool above all others has been most important in the country's fight against the virus: contact tracing. It is at the heart of their anti-COVID measures. "Whether it's 10 people or 1,000, all an infected person's close contacts have to self-isolate," says Professor Hicham Sbai.

Iran carries out more executions than nearly any other country in the world. China, which treats its capital punishment data as a state secret, is believed to be the only country that uses the death penalty more often than the Islamic Republic, having counted 255 executions in 2020 for everything from non-violent drug offenses to political sedition to murder and rape.

Iranian law, however, also allows for someone sentenced to death to be pardoned by their accuser or family of the victim, though such instances are rare. In one highly publicized case in 2014 a convicted murderer already had the noose around his neck when the victim's mother slapped her son's killer and then she forgave him, sparing his life at the last moment.

A case late last month was also notable for its timing, Sharq newspaper reports, when the victim's family forgave his killer a full 42 years after the murder.

The killer, who confessed to killing the man in his garden during a 1979 argument, spent 33 years as a fugitive before being captured in 2012. The subsequent death sentence would have been carried out, but a court in Sanandaj, the capital of the province of Kurdistan, ordered his release, after the victim's family spent "many sessions" with an arbitration committee that identifies certain killings that might warrant a pardon.

Researchers in the UK have found that nearly four in 10 university students are addicted to their smartphones and that 68.7% of the 1,043 students who took part in the study and displayed symptoms of addiction had trouble sleeping.

We will respond based on the principle of reciprocity, but not necessarily symmetrically.

— Maria Zakharova, a Russian foreign ministry spokeswoman, issued a blunt warning that Moscow would retaliate to new United States sanctions imposed in response to the poisoning and jailing of opposition leader Alexei Navalny.