Supporters of Pedro Castillo celebrate in Lima, Peru, after the leftist candidate claimed victory in the country's presidential election with a narrow lead of 44,058 votes ahead of right-wing rival Keiko Fujimori. However the result of the ballot has not - Stringer/EFE via ZUMA Press
WORLDCRUNCH
2020-06-17

Welcome to Thursday, where Biden-Putin talks reinstate ambassadors but achieve little else, Japan lifts some COVID restrictions ahead of the Olympics and boy is the Rhine river filthy. We also turn to Berlin-based daily Die Welt to understand why hackers (from Turkey and Russia alike) keep targeting Germany's Green Party.

• Biden-Putin summit talks: U.S. President Joe Biden and Russian President Vladimir Putin met in Geneva to discuss cybersecurity and arms control. Most notably, the two leaders agreed to resume nuclear talks and reinstate their respective ambassadors. However, the summit did not result in any major breakthroughs, though the American president said he was "not confident" Putin would "change his behavior."

• Iran urges citizens not to boycott Friday's election: Iran's eighth presidential election, slated for tomorrow, is expected to have very low voter turnout, as many dissatisfied citizens plan to boycott the vote. After years of economic hardship, censorship, and the recent disqualification of would-be candidates, polls suggest that only 41% of Iranians may vote.

• Japan to lift some COVID restrictions ahead of Olympics: The Japanese government will ease the State of Emergency in several prefectures, including Tokyo, this Monday in anticipation of the Olympic Games which begin on July 23. The government is also considering placing a 10,000-person cap on large spectator events.

• Construction deficiencies behind deadly Mexico City subway collapse: A new report has found that construction flaws and "structural failure" were the causes of the subway collapse in Mexico city that caused 26 deaths on May 4. According to the report carried out by a Norwegian risk management firm, metal studs that connected the rails were deficient — one of the major issues responsible for the accident.

• South Africa: Remains of 20 suspected illegal miners found: South African police are investigating the discovery of 20 bodies near an abandoned gold mine outside of Johannesburg. Authorities believe the victims were illegal miners, and police are still determining the cause of death, as many were found "wrapped in white plastic bags" with "severe body burns."

• More than 500 e-scooters found (and left) in the Rhine: Divers discovered hundreds of e-scooters in Cologne, Germany at the bottom of the Rhine river. Sadly, the discarded scooters will remain sunk, as the local e-scooter provider decided their recovery was too costly. 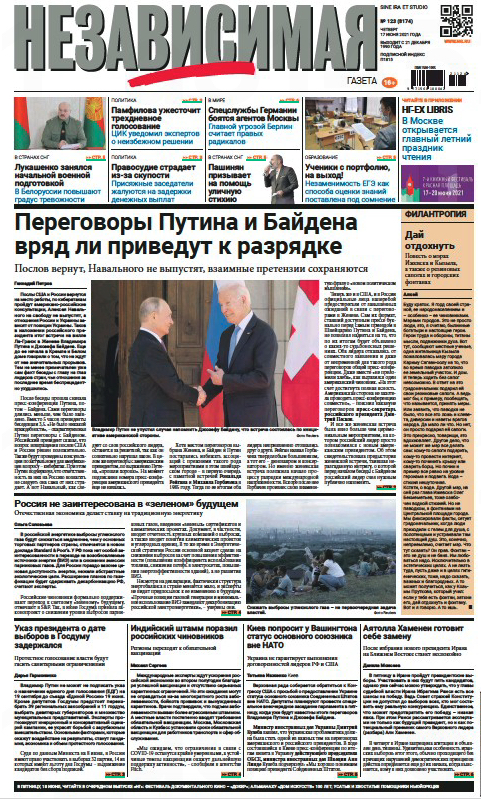 "Negotiations between Putin and Biden are unlikely to lead to detente," titles Russian daily Nezavisimaya Gazeta following the Geneva meeting between the U.S. and Russian presidents where little progress was made on issues such as cybersecurity, Ukraine, and the fate of detained opposition leader Alexei Navalny.

天和 (Tianhe, meaning heavenly harmony, is the name of China's space station 380 kilometers above the Earth. At 9:22 a.m. Beijing time today, the Shenzhou-12 capsule took off with three astronauts, Nie Haisheng, Liu Boming and Tang Hongbo, and successfully docked with the station seven hours later. This is China's first crewed space mission in five years, and the crew will be spending three months in the Tianhe module.

Why Putin and Erdogan are both going after Germany's Greens

On the Internet, Russian trolls are attacking the top candidate of the German Greens in the worst possible way. Attacks on Annalena Baerbock and other Green politicians also come from Turkey. Behind this is the concern about a green foreign policy, write Daniel-Dylan Böhmer and Clemens Wergin in Berlin-based daily Die Welt.

By the time Annalena Baerbock had been tapped to be the Green party candidate for chancellor, she had already made clear her critical position on Russia. She'd lambasted the Russian troops on the Ukrainian border and demanded a reversal of support for the Nord Stream 2 pipeline. Rising to the top of the Greens ticket, Baerbock began receiving targeted attacks across social media. Among them was a purported nude photo of the politician, which in reality showed a Russian nude model who resembles Baerbock.

Initially, the Greens had considered these violent personal attacks against Baerbock were part of a pattern of misogyny. Now, however, Green Party politician Cem Özdemir is accusing Russia and Turkey as the originators of anti-Baerbock campaigns on social media. "Annalena and the rest of us are no longer just being attacked domestically, but also by (Russian President Vladimir) Putin and his secret services, as well as by Turkish activists who are running a dirty campaign against her and the Greens." Özdemir told the Tagesspiegel daily.

The 2021 campaign would not be the first time that Russia intervened in the German electoral campaigns. For example, in the last federal election in 2017, Russian hacker attacks were directed at Bundestag members, and Russian bots tried to boost online content linked to the far-right AfD party. The Greens are also increasingly becoming a red flag for the government of Turkish President Recep Tayyip Erdogan. Cem Özdemir in particular has long been the target of vitriol among Erdogan's supporters. Back in 2016, he drew fierce verbal attacks from Ankara when he backed a bipartisan resolution on the Ottoman genocide of Armenians.

A Pokemon card was sold for nearly 12,000 euros in an auction in Troyes last week. The record price was revealed yesterday for the iconic "Charizard" card. This auction is also the first exclusively dedicated to Pokemon cards in France.

I believe in a Europe which embraces diversity, not one which hides it from our children.

— President of the EU Commission Ursula von der Leyen commented on Hungary's new law that places bans on portrayals of homosexuality or sex reassignment for audiences under 18.