Welcome to Monday, where Belarus agents hijack a Ryanair flight, a freak storm in China kills 21 marathoners and Bob Dylan gets sung in 11 languages for this 80th birthday. We also feature a Le Monde reportage from Siberia on Nikita Ouvarov, the Russian teenager busted for hanging anti-government posters, who was jailed without a trial for almost a year on charges of "terrorism."

• Belarus accused of hijacking plane to detain activist: Western officials are accusing Belarus agents of forcing a Ryanair flight from Greece to Lithuania to land in its capital of Minsk in order to arrest a prominent opposition figure who was on board.

• Stresa cable car accident: Italy is investigating the causes of an accident that left 14 dead, after a cable car fell Sunday into the side of a mountain near Stresa, in northern Italy.

• COVID-19 update: India passes 300,000 coronavirus deaths, with 26 million recorded cases — second only to the U.S. In Japan, the cities of Tokyo and Osaka look to speed up the vaccination program amid a COVID surge less than two months before the Olympics are slated to begin. Singapore authorities give provisional greenlight to a breathalyzer test that shows within 60 seconds whether someone has been infected. Meanwhile, Argentina has resumed a strict lockdown as cases soar in the country.

• Black Lives Matter activist shot in UK: Sasha Johnson, 27, a leader in the UK's Black Lives Matter movement is in critical condition after being shot in the head at a party in London. Though she was subject to numerous death threats, reports indicate that Johnson was not the intended target of the shooting early Sunday.

• Suu Kyi makes first public appearance since coup: Myanmar's deposed leader Aung San Suu Kyi made her first appearance Monday since a Feb. 1 military coup. The 75-year-old pro-democracy icon appeared to be in good health, but her lawyers say she has had no access to newspapers during detention.

• Swab right? Matchmaking apps like Tinder, OkCupid and Match are introducing a new feature that allows users to display on their profiles whether they've been vaccinated for COVID-19 yet. 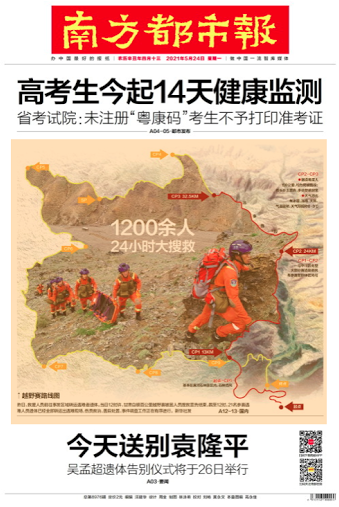 Guangzhou-based Southern Metropolis Daily features some of the more than 1,200 rescuers on a 24-hour search for survivors among ultramarathon runners caught in extreme weather. The storm and freezing temperatures that hit the high-altitude race left at least 21 runners dead. The 100-km, cross-country marathon race held in Baiyin, Gansu province, northern China, involved 172 participants in an area known for its arduous landscapes and unpredictable weather.

The 15-year-old swallowed by Putin's system

For French daily Le Monde, Benoît Vitkine reports on Nikita Ouvarov, the Russian teenager busted for hanging anti-government posters, who has been jailed for almost a year on charges of "terrorism," and has yet to even go to trial.

Nikita was arrested on June 6, 2020, along with his friends Bogdan and Denis, both of them 14 as well. The night before, the three boys pasted "subversive" posters in the city center of Kansk, a rusting, former industrial city located on the edge of Siberia. "Freedom for political prisoners," the posters read. Another one, which they stuck on the front of a police station and on the local headquarters of the FSB RF, Russia's primary security agency, read: "You fatten, we beg."

The three teenagers are now accused of "getting ready to commit terrorist actions" and of making explosive devices. The story, though, says as much about the arbitrary decisions of security services as it does about the escape fantasies of a group of teenagers doomed to live in a bleak city with little opportunity. The boys have yet to go to trial, and it's unclear when, in fact, the trial will take place. All three boys face the same charges — and risk life imprisonment — but it's likely that the heaviest sentence will be given to Nikita.

For a year now, an epidemic of "school terrorism" has spread everywhere in Krasnoïarsk, the region in Siberia where Kansk is located. Dozens of teenagers have been arrested for allegedly planning attacks. In most of the cases, authorities waited for children to celebrate their 14th birthday before taking action.

Samoa's Prime Minister-elect Fiame Naomi Mata'afa was locked out of the Pacific nation's parliament (the Legislative Assembly of Samoa, or "Fono" in the Samoan language) as she was about to take oath as the country's first female prime minister. In what Mata'afa referred to as a coup, Mata'afa's political rival and outgoing Prime Minister Tuilaepa Sailele Malielegaoi refused to cede power despite losing the April general election.

For his diehard fans, there's really no limit to Bob Dylan's reach, in time or space.

Having delivered yet another soul-stirring album at the age of 79, what's left to say for his 80th birthday? This self-described "song-and-dance man" is a category of his own in cultural history (Compare him to William Shakespeare rather than Bruce Springsteen, more a Wolfgang Mozart than a Paul McCartney.) Across a lifetime, his myth and music have circled the planet many times over, from his emergence in the 1960s as the 20-something would-be voice of his generation, through to his never-ending tour that has touched down in 1,000 cities in at least 54 different countries.

That leaves us with the only possible real limit to his reach: language. It was inevitable that his songs — from classics like "Blowin' in the Wind" and "Like a Rolling Stone" to more hidden gems like "Farewell Angelina" and "Simple Twist of Fate" — would end up translated and sung in other languages. So to wish Bob a very "happy birthday" in our own Worldcrunch way, here's a multilingual sampling of Dylan International. Enjoy!

➡️ Check it here on Worldcrunch.com

By the time of Friday's ceasefire, 53 schools in Gaza had been damaged by Israeli airstrikes, reports Arab News. The destruction from the 11 days of fighting also included nearly 17,000 homes and businesses destroyed or damaged, as well as six hospitals and four mosques. Israeli daily Haaretz reported that Gaza's Health Ministry put the death toll Friday at 243, but that the number would continue to rise as more bodies were pulled from the rubble. Of the deaths accounted for so far, 66 are children.

Of Lions And Plastic, Strongmen And Mother Nature

Throughout history, nature has had to bear the consequences of human delusions of grandeur. ...