Welcome to Monday, where Myanmar's death toll keeps rising, more countries suspend AstraZeneca vaccine and Beyoncé makes Grammy history. Le Monde takes us to northern Morocco where the closure of the border with the Spanish enclave of Ceuta has led to the collapse of an entire ecosystem.

• Myanmar's deadliest day: Myanmar's junta imposed martial law Monday across more districts of the capital city Yangon following the deadliest day of the protests since the coup began, with some 50 fatalities.

• More AstraZeneca doubts: Ireland and the Netherlands become the latest countries to suspend the use of the AstraZeneca vaccine over possible side effect concerns, even as a new UK study says the jab does not cause blood clots.

• Danone CEO forced out: Emmanuel Faber, an unorthodox corporate chief, has been ousted from his positions as Danone's CEO and chairman of the board under pressure from shareholders amid decreasing sales at the French food giant.

• Sandstorm hits Beijing: China's capital is choking on yellow dust and sand as the worst sandstorm in a decade sweeps over the city. 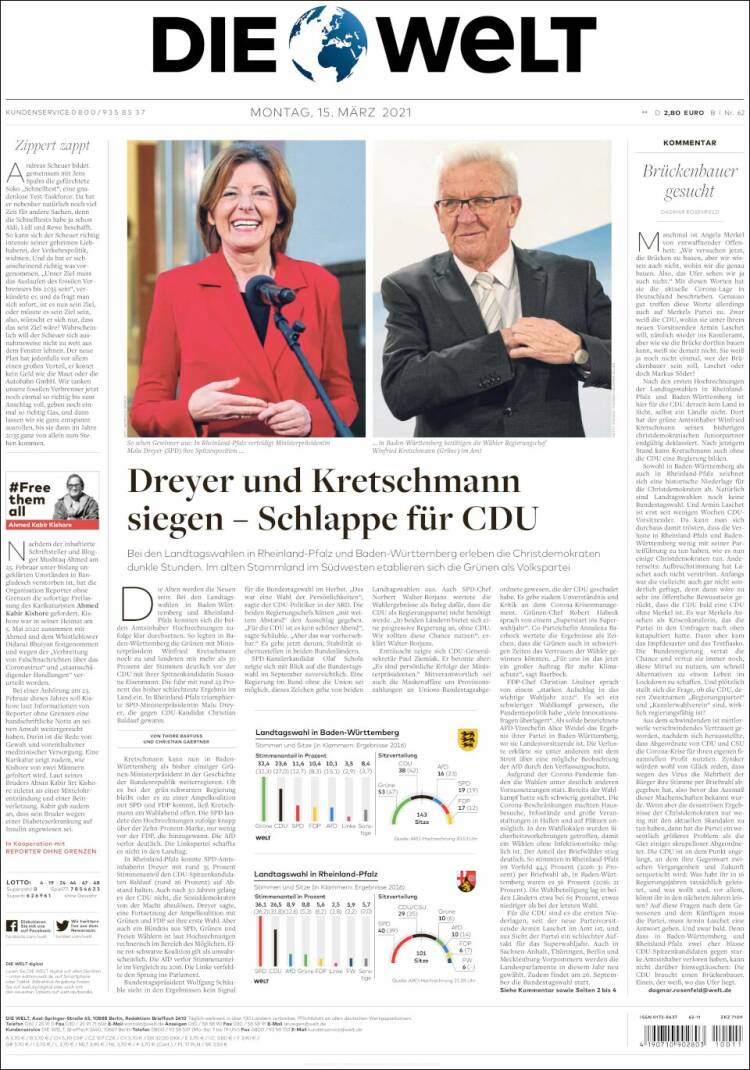 How COVID-19 put the brakes on Moroccan smuggling trade

The pandemic and subsequent closing of the border with Ceuta, a Spanish enclave in Morocco, put an end to the "atypical trade" that sustained the Fnideq region in the north of the country, reports Ghalia Kadiri in French daily Le Monde.

The March 2020 closure of the borders with the nearby Spanish enclaves due to COVID-19 dealt a severe blow to the economy of Fnideq and the surrounding area. The entire region depends on trade with Ceuta and Melilla (located further east), especially smuggling. This "atypical trade" had been depriving the kingdom of 4-5 billion dirhams (between 370 million and 460 million euros) in tax revenues every year. The government had tried to minimize the loss by closing the border post of Tarajal — which was used by tax-free carriers of goods — at the end of 2019.

Over the past few days, food baskets have been distributed to the families most affected by the crisis. "We are not begging for money! We are asking for real actions to create jobs," says Chaimae Amaachou, a young activist with a law degree who is unemployed. "An entire ecosystem has collapsed. People found themselves without water, without electricity and without enough money to pay their rent."

Opportunities for retraining are scarce, even though initiatives have been launched bit by bit. On the cliff of Fnideq, a brand new training center, which serves as an incubator, has just opened its doors. "Since 2019, we have financed 90 projects and 120 are in the process of being prepared," says the head of the center, Mohamed El Barkouki. "Our goal is to show that it is possible to succeed without smuggling. Unfortunately, these people have worked in border trade all their lives. It is difficult for them to imagine that another economy is possible. It will take time to restore confidence."

The proof, this time around, was not in the proverbial pudding. It was in the sausage.

As daily Berliner Kurier reports, police this week said they have identified the culprit in a 2012 break-in that happened in the western German town of Gevelsberg after the man's DNA was found on a piece of sausage he'd left behind.

Nine years ago, there had been no match when the half-chewed piece of forensic evidence was originally put through for analysis. But this week, after a 30-year-old native of Albania was arrested in France, a standard cross-check of international DNA databases matched him to the (long) leftover bit of sausage in Germany.

Although French police released the suspect, German authorities say they will reopen the cold case of burglary in Gevelsberg.

Oddly enough, this is not the first time German police report a hungry burglar's appetite coming back to bite him in den Arsch. According to German news website Der Westen, in February 2015 in Ansbach, a man who broke into a grocery store was snacking on sausage during his crime, leading to his arrest a couple of months later based on the DNA found in a meaty bite left behind.

It only goes to prove that, in Germany at least, some burglars really are the wurst.

According to a new report by the Stockholm International Peace Research Institute (SIPRI) published Monday, Qatar increased its weapons imports by a whopping 361% between 2016 and 2020. While the volume of arms trade worldwide was flat, the Swedish study registered a significant rise in imports in the Middle East, rising 25% over the previous five years across the region, including a 61% boost in Saudi Arabia.

He does not and cannot bless sin.

— The Vatican's orthodoxy office has issued a formal response to whether the Church could bless gay unions, stating that since God "cannot bless sin," the Church does not have the power to do so, dashing hopes for a more lenient attitude from Pope Francis toward the issue.

Ready For Cricket Flour? Ethics And Economics Of Insects As Food Commodity

A Czech entrepreneur is ready to mass-produce insects and turn them into a marketable, protein-ri...

BANGKOK — Luzviminda Siapo is telling me about the day her 19-year-old son was killed — ...