The India-China Conflict And The Ghosts Of 1962

Protests against the Chinese attack in India. - Avimanyu Banerjee/Pacific Press/ZUMA

For some, anti-Chinese rhetoric following the killing of 20 Indian soldiers is conjuring up memories of a dark and mostly forgotten chapter in India's history.

MUMBAI — Ramdas Athawale hit the nail on the head. Again.

Narendra Modi's minister for social justice found fame earlier in these virus times for a viral video in which he and a number others — including a Chinese diplomat — chanted "Go Corona Go!" Now, in the wake of our recent border clash in which China killed 20 Indian soldiers and injured dozens more, Athawale made the news again. "Restaurants selling Chinese food should be banned," he urged. "I appeal to people to boycott Chinese food."

It is, of course, a thoroughly misconceived appeal. Chinese cuisine and restaurants in India have nothing to do with China. And even if they did, this will hurt Indians — cooks, waiters and other employees — more than China. But if that's too intricate for those who like their blacks and whites, it's also a disturbingly dangerous appeal.

We've been down this road before, with tragic consequences. And the people who suffered that tragedy are, today, shivering in fear that they will suffer it again. All because of calls like this for a half-baked sense of patriotism.

Forget border clashes. We fought and lost a war with China in October and November 1962. We learn that history in school and, no surprise, it is invariably described as Chinese perfidy and betrayal. That characterization itself is worth examining in greater detail, but leave that for another time.

What is indeed a surprise to most Indians today, though — for this history isn't taught to us — is that because of the war, we incarcerated about 3,000 Chinese-Indians in a prison camp in Deoli, Rajasthan. Some were kept imprisoned until 1967 — five years after the war itself had ended. (The irony is that the incarceration itself also began after the war end: in late November 1962.)

We've been down this road before, with tragic consequences.

These were residents of India, all of them, mostly from our Northeastern states. Their families had been in the country for generations. They spoke largely English or Assamese or Hindi. In some cases, family roots led back to immigrants from China who had married locals and become locals themselves. Yet months of increasing hostility and scuffles along the border made plenty of ordinary Indians suspicious of our giant neighbor to the north, and it wasn't hard to turn that into anger against neighbors who merely looked like they were from that country.

When border scuffles turned into full-scale war, Indian lawmakers gave that prejudice legitimacy, with a series of laws that allowed for the arrest and incarceration of people who "looked Chinese." Entire families were rounded up; or just the husband; or just the wife and kids; or three brothers but not the fourth; on and on like that, the arbitrariness alone a testament to the irrationality of this effort.

In early 1963, a pregnant mother from Hasimara in West Bengal was also sent to the camp, and when her baby was born months later it was her one moment of joy in her otherwise gloomy, demoralizing camp existence, so she named the child Joy and when Joy grew up, she and I wrote The Deoliwallahs about this forgotten page of our history. 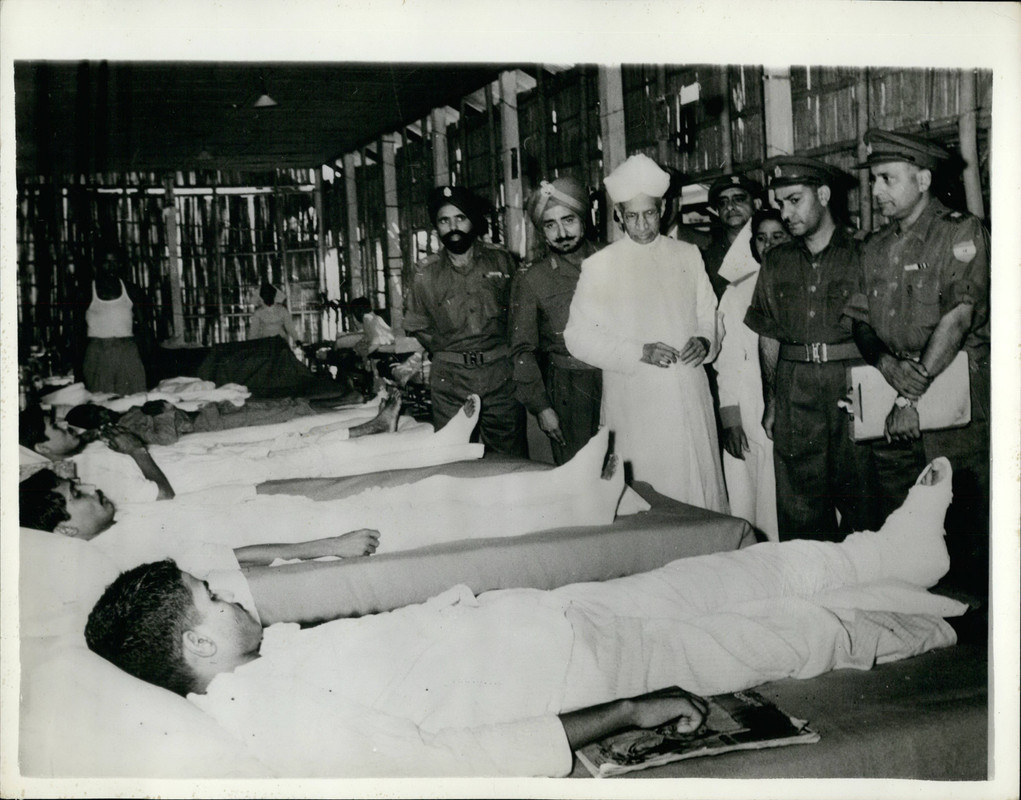 Indian President Sarvepalli Radhakrishnan during his visit to the casualties of the China-Indian war in 1962. — Photo: Keystone Press Agency/Keystone USA via ZUMAPRESS

In the book, Joy tells her and her mother's stories of the camp, as well as those of some other camp survivors. Apart from the prison experience, the thread that runs through them all is the distress and betrayal they feel to this day. Betrayal because a country that was theirs as much as that of any other Indian did this to them. Betrayal too because the country has so completely forgotten that this tragedy even happened.

With hostilities between the countries ratcheting up once more, camp survivors and the rest of the Chinese-Indian community feel that 1962 fear knocking on their doors all over again. This is no off-the-cuff observation, because calls for boycotts carry traumatic echoes for Chinese-Indians.

Exactly the same happened in 1962: "Chinese" restaurants and other establishments were boycotted, then vandalized. "Chinese" people on trains going to the Deoli camp had abuse and stones flung at them. "Chinese" people spent those years locked away. Such is the logical end, if you start with the curious belief that not eating Chinese food is suddenly the patriotic thing to do.

Nor is the 1962 fear taking shape only now. China and India — the two Asian giants — have been unwilling or unable to solve their border argument for decades, which means that tension between them has become a constant that they seem content to live with. Of course they issue statements, like after National Security Advisor Ajit Doval met China's foreign minister Wang Yi in Chengdu in 2018. The pair "resolved to intensify their efforts to achieve a fair, reasonable and mutually acceptable solution to the India-China boundary question at an early date," we heard. They "agreed that an early settlement of the boundary question serves the fundamental interests of both countries."

China and India — the two Asian giants — have been unwilling or unable to solve their border argument for decades.

That was the 21st such meeting between Chinese and Indian officials to search for answers to the "boundary question." And that number itself isn't enough of a marker of futility, now we have a new number to hammer home the point: 20. That's how many of India's finest were killed on our border.

After the killings — as they started inflaming Indian tempers — Joy wrote to someone she knows in the community in Calcutta to ask if she was fine. The lady replied: "Thank you dear. Yes, I doubt we are all fine and I guess history is repeating itself again from 1962. It is now 2020 and no different. May God save us. Amen."

*The author, based in Mumbai, has written multiple books, most recently The Deoliwalahs: The True Story of the 1962 Chinese-Indian Internment, with co-author Joy Ma. He tweets at @DeathEndsFun.

In India, A Manual And Movement To Talk Openly About Menstruation

-Analysis- CHENNAI — "What is this?," my curious seven year old asked, picking up a pack ...