Risks To Iran's Food Supply: Blame The Pandemic And Politics

A farmer's market in Tehran - Morteza Nikoubazl/NurPhoto via ZUMA

The decline of agriculture in Iran after the 1979 revolution and absence of proper farming policies are exacerbating the pandemic's effects to threaten its food security.

In the last year, coronavirus has dramatically undermined food production and supply chains. The UN's Food and Agriculture Organization (FAO) has warned that the repercussions from the virus are threatening the food security of millions worldwide.

The pandemic interrupted production chains in 2020 and pushed up the prices of a range of products, notably medical supplies and food products.

In Iran, its consequences have compounded endemic problems caused by 40 years of economic mismanagement and regime indifference to sectors like farming. Food products did become more costly in Iran in 2020, but their prices were already rising in 2019 and before.

The government of President Hassan Rouhani (elected in Aug. 2013), which dubs itself the government of Prudence and Hope (Tadbir va omid), promised to turn the economy around within 100 days of its election. Iranians' hopes rose further with the signature of the 2015 nuclear pact with other global powers. But this soon went the dismal way of preceding administrations, such as the eight-year presidency of Mahmoud Ahmadinejad, who Rouhani allies had accused of ruining Iranian agriculture.

In the eight years of Rouhani's government, the price of meat has risen by 250%, chicken by 400%, a kilogram of sugar by 359% and a kilogram of split peas by 373%. The price of rice, a daily staple in Iran, has risen 150% in the past year. The inflation rate for bread and cereals is normally 40% a year. Some dairy products have almost quintupled in price under Rouhani.

Not surprisingly these exorbitant hikes have dampened consumer demand. The head of the country's food wholesalers association, Qasem'ali Hasani, recently declared there had been a 50% drop in demand for food products in the last six months.

Without an overall agricultural plan, specialists are warning about the threat to the country's food security. A farming specialist for the Phoenix Project Iran, a private research initiative, spoke to Kayhan London about Iranian governance of this sector, calling it "extremely weak in all productive aspects." He says farming techniques and land management had declined, and this has led to soil erosion and wasted water. Farming lands, he says, "have become loss-making in economic terms."

He believes a lack of planning and desire for short-term profits had harmed the land more than climate change, and says the country must start using the sustainable techniques proposed by the FAO. 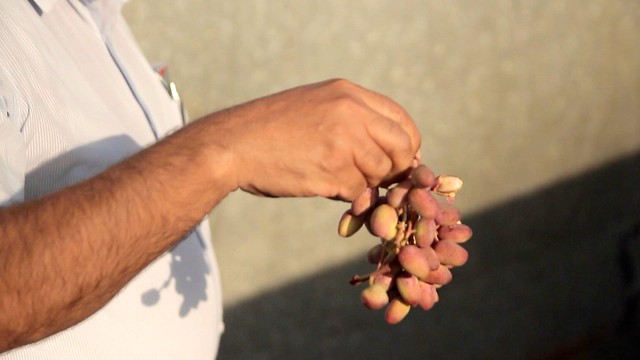 Iran's pistachoes have long been a staple product. Photo: Oxlaey

Land grabbing, practiced for decades by groups linked to state powers, has become another threat to farming. The government counted 44,289 cases of illegal changes in land use across farming lands in Iran in the Persian calendar year that finished on March 20, 2019. The parliamentary Research Center has likewise counted a reduction of forests in Iran from around 18.3 million hectares to 12.4 million hectares in the last three decades.

The Engineering and Studies Office of the Forests, Range and Watershed Management Organization estimates that between 2015 and 2020, some 12,000 hectares of woodlands and forests were cut down or spoiled. It puts the soil erosion rate in Iran at 16.7 tons per hectare, or four times the world average.

Farmers have complained about the decreasing quality of fertilizers, pesticides and animal feed, along with their rising prices.

One trout farmer tells Kayhan London this was the case with trout feed, which was mostly imported. This, he says, was impeding fish growth in north-western Iran and causing considerable economic losses. "The feed is low-quality and the fish fall behind the growth program," he says.

In the past two years, thousands of fish, chicken and livestock farms have gone bankrupt. This itself has fueled price rises in recent months, though officials prefer to blame "hoarders" and speculators.

The specialist from the Phoenix Project says low-quality fertilizers and pesticides have become key factors in the damage to farming output. He says farmers had been using "fake and even contaminated chemical pesticides and fertilizers," which have effectively prevented many small-scale farmers from selling their produce inside the country.

The wholesale and nationwide destruction of agriculture could be imminent.

This merely paves the way for more imports, he says. Poor management has sharply reduced the value of farming products, impeded investment and likely fueled rising labor and production costs. In recent years, the government has paid up just a portion of the budget funds earmarked for the sector, and it has no programs for backing farmers. Many, especially those living in drought-stricken areas, have had to move to cities where they end up in shantytowns, scraping together a meager living.

These are just some of the dynamics involved in the decline of farming in Iran, which will undermine the food security of millions of Iranians. The specialist from the Phoenix Project says, "there is no doubt, if the sector proceeds as it has, the wholesale and nationwide destruction of agriculture is imminent." Under Rouhani, he says, Iran has lost markets for some of its most iconic products, such as saffron, pistachios and dates.

"It is also close to losing its leading position as a producer of pomegranates," he says, adding that changes in management practices could potentially still reverse these losses. But these, he added, are unlikely "under the Islamic Republic," which is turning Iran into a "consumer and importer of agricultural products."

A change of direction would first require a government that is concerned with its people, rather than a regime that uses public monies to maintain its cronies and to forward its own ideological goals in overseas.

Besides partially destroying a key nuclear installation, the suspected sabotage at the Natanz ura...

There are the laws of the nation, then there's what grandma says. Those two codes collided in a ...