Relatives of Amer Abu Aisheh, accused of abducting three Israeli teens, don't expect to see him again. His mother's definition of a martyr: "one who chooses to give their life to kill the Jews."

HALHUL — The remains of Amer Abu Aisheh’s house are on a dirt road in Halhul, near Hebron in the southern West Bank. Amer is one of the two Palestinians that Israel accuses of having kidnapped and murdered Eyal Yifrach, Gilad Shaar and Naftali Frankel, the three teenagers who disappeared while hitchhiking home from their religious schools on settlements near Hebron on June 12.

Half of his home has been reduced to ashes following the explosions and fires started by the Israeli military (IDF) in retribution for the deaths. To welcome me, Amer’s cousin Abdul Rahman, 24, is standing on a pile of debris. He says he is "still in shock" at what he has seen.

"There were almost one hundred soldiers, they came at 8:30 p.m. and put the women and children into one room, and kept us men out of the house while they started smashing everything. Doors, windows, furniture, sofas, sinks — everything went to pieces," he says. "By 11 p.m., there was an explosion on the side of the house where Amer, his wife and their three children lived, and the fire that broke out afterward lasted for hours because they prevented the fire brigade from intervening."

While Abdul is telling me about their "night from hell," Mohammed, 59, sits down on a plastic chair beside him. He is the uncle of this suspected terrorist, as well as his landlord. "The Israelis have proven themselves to be animals when it comes to our family, and for them peace means chasing us away from this land. What’s worse is that the Palestinian leaders who govern us are incapable of defending us, guiding us or constructing a State for us, so all that is really left is Allah."

Mohammed takes me on a tour through the remains of his demolished house with its smashed doors, broken stairs and blackened walls. The relatives of this Hamas suspect absolutely refute "the false version of events invented by Israel." Abdul describes his cousin as a boy with health problems since hitting his head in a swimming pool, and who has "a very basic education and worked as an unsuccessful locksmith."

His only real passion? "Going to the mosque."

"He met and made friends with Marwan Qawasmeh at the mosque," adds his uncle, referring to the other man sought after by Israel. "But that does not mean that they were part of Hamas or that they kidnapped those three boys. It’s a full Zionist-American invention. In reality the Israelis probably already have Amer and Marwan in custody, or maybe they have already killed them. But we’ll never see them again." 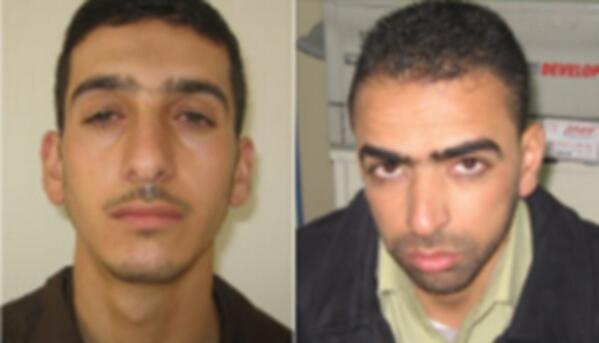 When it comes to Eyal, Gilad and Naftali, there is no mercy in this house. "Now everyone is crying for them," says Ziad, another of Amer’s uncles, "but the situation was that three Jewish intruders were on Palestinian land, as intrusive and violent as the other settlers who steal our water, work, security and our lives."

Mother of a martyr

In the part of the house that isn’t demolished, where Amer’s parents and brothers live, the only thing still stuck up on the wall is a flyer that has the Hamas insignia on it. It features a picture of Amer and his brother Zayd, who died during an attack against the Israelis during the Second Intifada.

From a room in the back, Amer’s mother Nadia, 50, comes forward. Wearing a white hijab, she lets everyone know with a nod of her head that she wants to speak. Some family members take a step back to show respect for her, as she has lost one son, two more are in jail, and another is on the run as the Most Wanted man by the IDF.

"I am the mother of a Palestinian martyr, perhaps two because I will probably never see Amer again," she says.

Nadia says that she is "proud and strong because of what her sons have achieved," and wishes Amer a "victorious Ramadan," underlining that she feels they are "respected by their people and by Allah."

For Nadia, the definition of a martyr is "one who chooses to give their life to kill the Jews," and being victorious means "achieving this."

Since Amer has disappeared — he hasn’t been heard from since the Jewish children were kidnapped on June 12 — and with the house now gutted, Nadia is determined to "continue what [her] children started." How? "We will rebuild this house, piece by piece, and we will have a bigger and stronger place because Allah will give us the strength. The Israelis have destroyed five houses in our family over the past 20 years, since the so-called peace began, but we have always rebuilt, we remain on this earth and we are stronger every day."

It’s time to say goodbye, and Nadia picks up Amer’s youngest son and adds, "I would like the Italians and the rest of Europe to know that there is nothing more beautiful than to be a mother of martyrs."

Just a few seconds later a senior official of the Palestinian Authority appears at the door. Nadia turns her back to him, and the rest of the family walk past him quickly.

Mohammed, however, stays to explain their collective repulsion: "When the Israelis come to demolish the house, not one soldier from the Authority came to see it. Had it been the home of a Fatah militant they would have been compensated, but we won’t be given anything at all because we go to the mosque. Because of this, Allah is our best ally."

When it was first published in 2013, Tanya Habjouqa's groundbreaking series "Occupied Pleasures" forced us to see one of the most photographed corners of the world in an entirely different light. ...

A Manifesto for Tali'at, a new movement seeking to put the feminist cause at the center of the battle for Palestinian rights.