Rising populism in the West can be traced to continuing fallout from the 2007-08 financial crisis. The responses – from both left and right – share certain fundamental arguments.

MUNICH — When it was founded in 2013, Alternative für Deutschland (AfD) (Alternative for Germany) was really just a political party for economics professors. Launched by Bernd Lucke, a macroeconomics professor at the University of Hamburg, the party's focus on the nitty-gritty of economics and trade policy was evident from its first convention: there, discussions centered on rejecting the euro and putting an end to bailout packages, with a generally conservative attitude toward free-market topics such as fiscal simplification, debt reduction and the curbing of liability risks.

We've come a long way since then. Today, in the face of a major refugee crisis, the likes of Lucke and his professor chums have been driven from the party leadership. Now it's the right-wing populists Jörg Meuthen and Frauke Petry who have taken power. And their No. 1 concern is the rejection and expulsion of refugees and migrants. Precise statements about economic matters have become quite rare. Apart from one campaign advertising the abolition of ready cash, the AfD's economic policy program is quite thin.

It's a strange contrast: the rise of populism in Western industrial nations that followed their financial implosion is directly linked to low-income earners' anger and frustration about the crisis and its consequences. French economist Jean Pisani-Ferry attributed the populists' success to the "bad mood of the lower middle class." Still, talking about the economy does not electrify the masses – migration does.

What the AfD is to Germany, the SVP is to Switzerland, with businessman Christoph Blocher holding the reins.

In the U.S., real estate billionaire Donald Trump is leading the race to be the Republican nominee for president. His election campaign has focused primarily on his opposition to illegal immigrants and Muslims.

As for Trump's economic program, one quickly discovers that it is anything but right-wing; from an American point of view, it might not even qualify as conservative. The candidate echoes the words of American trade unions, pledging to rescue the country from low-priced imports from China.

France's picture of right-wing populism is, instead, full of specifics. The National Front party of Marine Le Pen has a detailed manifesto of the party's economic objectives. With terrifying professionalism, the party lays out its plan to take over the French government. Its economic program is strongly influenced by nationalist socialism.

The National Front wants to partly nationalize French banks and collect a 3% tax on all imports. Le Pen wants to use that money to raise the minimum wage by 200 euros per month. She also wants the cost of gas and electricity to fall by 3%, and to set a standard retirement age of 60. She is striving for a "strategic partnership" with Russia.

And of course the National Front wants France to exit the euro (which it calls the "Trojan Horse of ultra-globalization"). With the euro as a parallel currency, the thinking goes, the new franc could return as the country's legitimate national currency with printing money favored, capital markets pushed back and inflation maybe even welcomed. 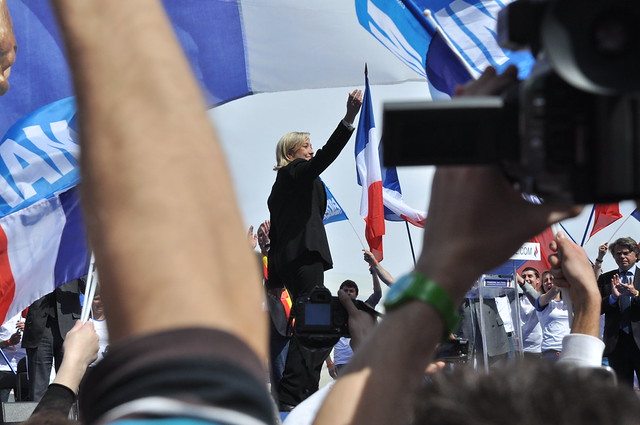 The political dimension of this economic and monetary policy must not be underestimated: France abandoning the euro would be like France turning its back on Germany. Since many French blame European austerity policies and the euro for the economic crisis, this program could become very attractive not only to far-right voters, but also to those from the left and center.

Bernie Sanders, too, can claim the "populist" label. The socialist senator from Vermont is not xenophobic, he's not stirring up hatred against Mexicans and Muslims. He inspires left-wing youth. And yet, he represents that old American populism from the 19th century, as proven by his radical tirades against Wall Street, and his tendency to want to solve all problems with financially sustainable solutions. Populists such as William Jennings Bryan at the end of the 19th century wanted to remedy farmers' poverty by fighting the gold standard and declaring silver coins the official means of payment. If they had succeeded, massive inflation would have followed.

Sanders blames America's banks and stock exchange for all the country's social problems. Many of his goals could be found in any of Europe's social-democratic party platforms: free access to university and a higher minimum wage. But what Sanders is missing is a credible plan for financing his policies. He also joins Trump in opposing new free trade pacts.

For Germany, what will make the difference is the AfD's success during upcoming regional elections. It seems that the party wants to get rid of the impression of being free-market driven. "I reject another economization of society. We are the party that takes the middle class's needs seriously," says Marcus Pretzell, the AfD's deputy in the European Parliament, on his website.

Socio-politically right-wing, economically left-wing – that, too, seems to be a valid strategy these days.

No country has profited from the Pax Americana as much as Germany. Now, as U.S. influence wanes, it has a key role to play in filling the power vacuum.