In Jerusalem, The Delicate Art Of Ignoring Each Other

JERUSALEM — I was walking down Via Dolorosa — the Way of the Cross in Jerusalem. In front of me were three young Germans. They found the whole thing laughable, and kept confirming this to each other by pointing out all the stupid details. "Here, look, we're at the next station. What does it say about this one?" One of them read from a guidebook, "Veronica hands Jesus the cloth to wipe the perspiration from his face. The likeness of his face remains on the cloth."

A shaking of heads, low laughter. All the pious imagery, the rosary beads, the icons. A group of pilgrims was heading in our direction, Americans, carrying a cross and singing the words of the criminal on the cross next to Jesus's. "Jesus, remember me when you come into your kingdom."

They were singing so softly it sounded like a distant murmur. You could see how foreign they felt here, anxious not to hurt anyone's feelings. The pilgrims' inhibition bordered on the ridiculous, and the Germans picked up on that as they squeezed past them on the narrow street. The crossing of the two attitudes was somehow unpleasant. And being caught right in the middle, I felt it acutely.

When I reached where Via Dolorosa meets Al Wad Street, I couldn't walk on because suddenly I'd become part of an Arab crowd that filled the whole street and moved very slowly. Thousands of feet, maybe tens of thousands of feet, shuffled in the same direction. It made me think of the expression "the Arab street." Here it was, and I was lost deep inside of it.

It was Friday — the Arab hour. The Muslim quarter emerged from its grayness as did the Arab men who can seem so invisible, in their badly fitting jackets and cheap sweaters. Now I was seeing white head coverings and gold-braided Bedouin garb. Some men carried canes, even though many didn't need them. Instead, the canes served as a scepter signifying the dignity of their age.

A life of prayers

Of course, Friday's crowd included young men elegantly clad in Western dress, their prayer rugs slung casually over their shoulders. These were slim success stories in well-fitting suits and freshly ironed white shirts. There were also old women, some still walking tall, others bent over so far they were no taller than a 9-year-old child.

It seemed as if all of Arab Jerusalem was on the street walking, striding, swaggering, hobbling to Friday prayers. I heard an old many saying, "Ya Allah!" then again "Ya Allah!" He was unsteady on his legs, and the travail of old age was noticeable in his sigh. He'd no doubt followed these stone streets since his youth, a journey that was more and more difficult for him.

The pace quickened at the corner of Via Dolorosa and Al Wad, where more heavily armed men than usual were posted. This is where the irreconcilable sides meet: Arabia, Judea. Thousands of Muslims were on their way to Haram al- Sharif, which the Jews call the Temple Mount. Thousands of Jews were on their way to the Wailing Wall, which is nothing other than the western supporting wall of the plateau on which Muslims were at this very moment saying their Friday prayers. And in the middle of this were Christians visiting the Way of the Cross. 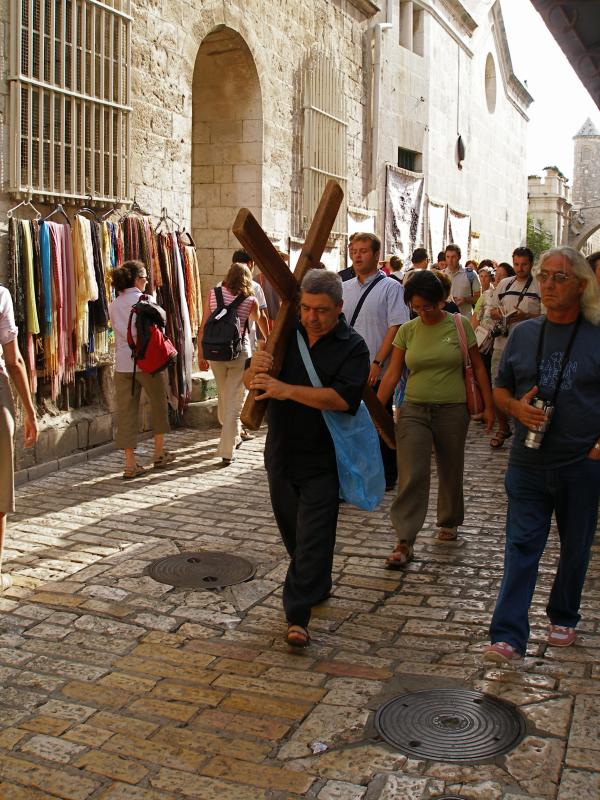 Pilgrims on the Via Dolorosa — Photo: Seetheholyland

So there I was, standing in that short, narrow stretch of path being traveled by all three groups.

As if led by some choreographer on high, people who would throw stones at one another under slightly different circumstances instead just drifted past each other, so packed together you could smell their breath. No one touched anyone else. In fact, they walked past appearing not to notice each other.

That was it. The whole secret. I understood it at just that moment, on the corner of Al Wad Street and Via Dolorosa. This was the high art of feigning not to see. While the United States and Europe pursue some kind of melting-pot Utopia, I could see before my eyes the potential for peace in this mutual act of ignoring.

Granted, it was a peace as certain as a glass of milk is in the hands of a 3-year-old. The glass could drop at any time, just as this fragile coexistence could detonate from one moment to the next.

Charly Effendi had warned me against wandering through certain deserted streets at night. He had once been attacked. "They just appear, and start stabbing — your legs, arms — in seconds. You don't stand a chance." Who are "they?" I asked him. He shrugged his shoulders.

On my first day in Jerusalem, I'd heard about a knife attack at the Damascus Gate. Word was that the perpetrator had stabbed an ultraorthodox Jew in the neck, from behind. He had then fled and was still at large. Who does something like that? More shrugs from the people I spoke to. It was the act of a criminal, a crazy person. The man who was attacked had survived and wasn't even seriously hurt. Nothing to make a big deal about in Jerusalem.

Progressively, the parade of Arabs was thinning out. Every side street that led to one of the gates of Haram al-Sharif was filled with the faithful. I was able to make fast progress in Al Wad Street and soon reached the Wailing Wall, where far more than usual worshippers had gathered.

The yearning for this place that had moved Jews all over the world for nearly two thousand years had not been stilled. You could see it in the hands that were laid against the large blocks of stone that made up the wall. You could hear it in the voices of those singing the psalms, in the sighs of those standing silently. A non-Jew cannot imagine what it meant and still means today for a Jew to come to this wall of the lost temple and pray.

Until 1967, when Moshe Dayan conquered the Old City, it had been absolutely forbidden for 19 years for Jews to visit the Wailing Wall. They had been forbidden from blowing the shofar (ram's horn) since 1931. There had been several massacres over things such as this. There was no open space in front of the wall, just a gloomy street that ran by it. 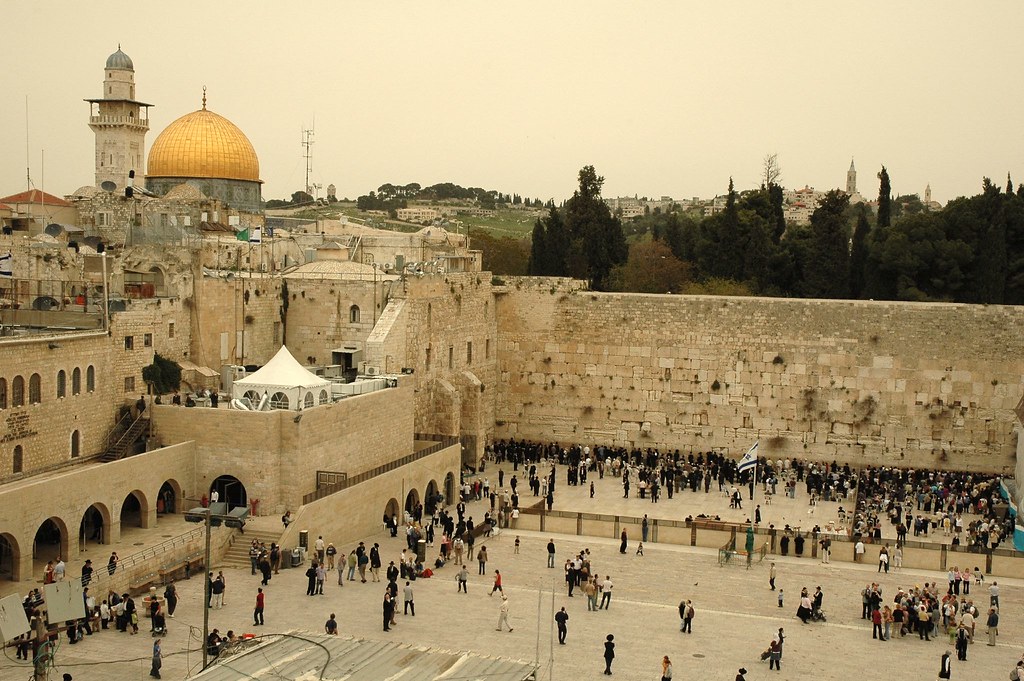 In short, the most holy Jewish place remaining was a non-place, and the pain of that is remains as access has been made as difficult as possible for Jews. When Dayan's advance troops reached the Wall in 1967, the soldiers wept openly, and the image was broadcast around the world.

I looked up. The air was filled with a sound like the hum of an enormous swarm of bees. I realized it was Arab humming emanating from the several thousand attending Friday prayers on the Temple Mount. The humming hung like a cloud over the Jews gathered at the foot of the mount. They were that close. Those who were alien and hated lived behind the wall, and the sound of them roared overhead.

While the Muslims kneeled on the plateau and bowed to Mecca, the Jews were murmuring their prayers a few meters beneath them. Surahs above, psalms below. Above me were people certain of their place in the privileged circle of Allah and the prophets, and around me the prayers reflected yearning for the lost temple. Temple Mount was just a few steps away, the Wailing Wall a stone's throw. And yes, stones had flown here, bullets too. Now the humming of prayer swelled on the heights. Arabia filled the air. All the reasons to go for each others' throats were right there. But nothing happened.

When I made my way back to Al Wad Street headed in the direction of the Damascus Gate, I found the scene completely changed. Friday prayers had come to an end, and the stream of worshippers was ebbing. Now the street sellers had arrived. Prayer day is a big day for business. There were freshly picked strawberries all piled up, stacks of Arab sweets. There were sneakers, bright red Teddy bears, dates, electronic appliances of all kinds, underwear sold in packs of 10.

The cries of street sellers dominated the space as the interest of the faithful turned from prayer to buying. Before now, when all those thousands were pressing forward to get to prayers, I hadn't been pushed or had my feet trampled on, not once. Now I could feel stomachs, knees, elbows pressing against me as people responded to the cries of the street sellers, each one peddling his goods with the kind of ferocity that stays in your ears hours later.

The craziest one of them all had a very basic loudspeaker with him. He stood on the semi-circle of stairs in front of the Damascus Gate shouting down to a large marveling crowd that was buying up what he had to sell with alacrity. Box after box was handed from person to person, over their heads, until it reached the happy buyer, and then the money made its way back hand up to hand.

This seasoned seller barked into his microphone without stopping. He was bright red under the hot sun, and he sold and sold, stuffing the money into his pockets as it flew in. It was as if he were in some kind of rapture, there selling microwave ovens in the center of Jerusalem.

*This article is a translated excerpt from a German-language book by Wolfgang Büscher, Ein Frühling in Jerusalem (One Spring in Jerusalem), published by Rowohlt Berlin.

An Israeli law enacted in mid-2017 amounts to a de facto salary cut for African asylum seekers, plunging the community into a financial crisis.

The Silicon Wadi, as Israel's tech sector is known, has a penchant for creating innovative new companies. But rather than grow to maturity, they're often sold off early to larger, foreign firms.