A century from now, the global population will finally begin to decline. But before that, the world must deal with the waste created by an exploding overpopulation: How do we hold on until then?

PARIS — May the naturally anxious or chronic pessimists be reassured: everything will be a lot better in 100 years. By then, the human population will have started decreasing as a result of the declining birth rate.

Demographers estimate that we can reasonably count on a planet with 4 billion individuals by the end of the 22nd century, compared to 7 billion today. Humanity, with an accumulated two centuries of additional technical progress, will easily adapt to an Earth where the average temperature will have risen by 4 to 5 degrees Celsius.

Of course, some places will have been made uninhabitable because of Fukushima-like nuclear disasters, the mass burying of radioactive waste or the desertification linked to global warming. But others areas will appear once the ice floes have melted, for instance, or as a result of mass urbanization, of which we already know the signs.

If we accept, as Claude Lévi-Strauss did, that the quality of living together is directly correlated to the size of the population, then we have every right to feel glad about this prospect. And yet, there is at least one French economist who has his doubts — because even if we believe the predictions, we still need to get there.

Pierre-Noël Giraud, one of France's most brilliant living economists, has little presence in the media, which is perhaps a good thing since it affords him more time to work and formulate questions like the one posed in his recently published book L'Homme inutile (The Useless Man): How do we handle the transition towards this promising distant future, knowing that there's 100 years in between?

As part of his analysis, Giraud points out that before we reach the point of demographic decline, we will first have to overcome a paroxysmal period, with a planet inhabited by 10 billion people in 2050. The problem, the author argues, won't be the depletion of resources so much as the absorption of the mass of discharged waste. The other major challenge will be the capacity of our economies to employ such a vast workforce.

In 1996, 20 years before Thomas Piketty become an economics star, Giraud wrote L'Inégalité du monde (Inequality in the world), in which he demonstrates how globalization, with its indisputable virtues, favored the emergence of low-wage countries and at the same time introduced brutal competition in the "caught up" countries, with the pauperization of our middle classes as a consequence. His new book picks up where the previous work left off.

Inequality, according to Giraud, has now reached its worst form: uselessness, as embodied by the unemployed, people working in precarious conditions or landless farmers, who are reduced to surviving with public or private welfare. That — together with the environment — is the central problem of our societies, the author argues. 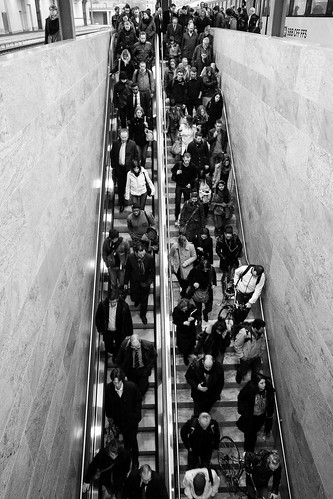 To resolve this, we need to establish the correct diagnostic. The three major forms of globalization, digital, financial and industrial, have led to a division of the active population into two major employment categories: the nomad and the sedentary, he argues. Since globalization and the relocation of companies, the former — engineers, financial workers, highly qualified workers, etc. — have been opposed on a global level. That needs to change, according to Giraud, who says it's in the best interest of every nation to make this population grow and to keep it from moving elsewhere. Why? Because the nomads tend to have above average wealth and place orders to the sedentary, which are there to provide the former with all the necessary services.

The problem, Giraud argues, is that many countries have failed to maintain a good balance between these two groups. In developed countries, nomads are leaving. And there are too many sedentaries for a reducing market: hence the pauperization, the precariousness and the unemployment. In emerging counties, the opposite is true: nomads are arriving, but not in sufficient numbers to feed a huge mass of sedentaries. Either way, the effects are the same: increasing uselessness.

While there are certainly moral issues at play here, Giraud mostly uses an economic and political lens to form his analysis. The useless human, he argues, represents a huge financial drain on our societies, spurs migration from developing countries, and increases the threat of civil war in more developed parts of the world.

This is why we need to review our economic policies so we can get over this demographical hyper-growth point. But how? There are many, complicated solutions. First, we need a good agreement on climate, Giraud argues. We also need greatly improved financial sector regulations, and deregulation of monopolies so as to improve the lot of sedentary class. In short, we need to conceive our economic policies differently — and not gamble everything on a possible, but very uncertain, demographic miracle.

Offline And On Horseback: A News Detox Odyssey Through Europe

Gaspard Koenig has returned after several months spent traveling across Europe on horseback. The journey included a conscious effort to limit his exposure to current events, relying only on the local newspapers and conversations.

COVID-19 shook up the world of work last spring. Since the virus (and lockdowns) returned this fall, the changes underway have only accelerated.