City As Brothel, How Berlin Let Prostitution Spread Near Schools

Prostitutes in the streets of Berlin - Erwin Warkentin

Other cities ban prostitution from residential areas with schools and playgrounds. Not Berlin. Here, it's just part of the city's "poor, but sexy" image.

This petite woman has been living in Schöneberger Kurfürstenstraße for 45 years. It has always been a difficult neighborhood, with girls on the streets waiting for male clients. Schütze is used to seeing that, she acknowledges.

"But what's happening now has nothing to do with 'normal prostitution.' It's unbearable," she says.

Case in point: she has taken pictures of the local playground, where children see "women doing their job and throwing used condoms in the sandbox once they're done." Schütze sent the pictures to the mayor — to no avail.

The madam's cozy brothel of yesteryear is but a nostalgic illusion: today, Eastern European gangs rule the business out on the streets. "They dump hundreds of girls out there, there are turf wars," says a businessman. "I could file charges every day, but I don't, because nobody cares anyway."

Residents and business executives ask for an exclusion zone, or at least a closing time — a hopeless fantasy. Politicians in Berlin pride themselves on their liberal attitudes toward sexuality.

Bald pimps in Adidas sweatpants step out of cars with Bulgarian or Romanian license plates. They stand, legs apart, watching over â€˜their' girls, rebuking them if necessary. Sex is a round-the-clock business. Girls who dance on tables by night are found on the streets at any time of the day. Drugs are part of the daily business. There are about 2,000 prostitutes working in Berlin, according to police estimates. Other cities at least rely on restricted zones to keep the industry away from schools and residential areas, but not so the German capital.

In 2013, Senator of the Interior and Sports Frank Henkel proposed the establishment of a restricted area around the Kurfürstenstraße — in vain. "No, this would only make prostitution move from one street to another," objected Mayor Angelika Schöttler. The city already does a lot about prostitution, she claims, with officials going to talk to the women, but there is always a steady stream of newcomers.

Prostitution is part of Berlin's image and identity; it's one of the capital's main attractions. "Poor, but sexy," is not just an easygoing attitude, it's also a very explicit promise. The huge brothel Artemis recently started advertising on local buses.

Nine hundred policemen raided that establishment in April. During a press conference, the public prosecutor's office compared the women working there with "slaves in cotton fields" who are not allowed to make their own decisions. There was mention of human trafficking.

If one pays a visit to the Artemis, however, one has a hard time believing these allegations. Slaves look rather different from the women working there, four of whom are sitting around a table in one of the brothel's suites. "Nobody forces me to do anything. I come and go as I please. Nobody tells me what to do," one of them claims. She doesn't look like she's being coerced into saying this.

Another of the women, Simay, is 26 years old and lives in Turkey. She regularly comes to Germany to work for two weeks at a time. Before that, she attended university.

"A lot of what they say about us is wrong. Nobody tells me not to use a condom during oral sex, as the prosecutor claims. I do what I want and if I want to go home early, I simply tell them," she says.

Does she live in the brothel when she's in Berlin? "Of course, they put rooms at our disposal for 20 euros a night," Simay says. "Why should I look for a hotel after work?"

Chanel has been working at the Artemis for 10 years. She, too, is happy with her workplace: "There is even healthcare available to me, if I want to use it. And in every room there's a panic button, that alerts security in case something goes wrong," she says.

The Berlin public prosecutor's office alleges widespread tax evasion at the Artemis. "Nonsense," says Sila, a 29-year-old from Turkey. "I pay an entrance fee of 80 euros, just like each one of my clients. The money I make is mine, and I have to pay taxes."

This might be true, or not — but the real question is why Berlin is judging brothels and street prostitution according to different standards. This big brothel is being attacked harshly, whereas when it comes to organized street-prostitution, there's no hurry at all in bringing charges. Today, more and more police officers are voicing their criticism, seeing far more urgent problems than the Artemis.

Other cities lead by example. Düsseldorf, Essen, Dortmund, Cologne, Frankfurt and Munich all have clear, restricted areas for prostitution. Sure, implementing this in Berlin would lead to the very displacement that the mayor fears, but at least the industry would be kept away from children and families.

The true stumbling block issue is the so-called "blot of Berlin," the area around the famous Kurfürstenstraße. Day in, day out, Romanian and Bulgarian women click their heels against the pavement. 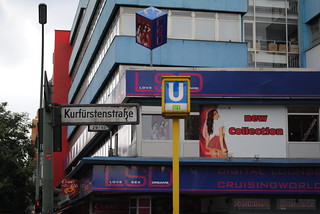 "These girls are being forced into prostitution by their pimps. Their money is taken from them, they suffer violent attacks," says a police officer. "These are inhumane conditions."

The women approach any man who walks by. They gesticulate a lot. Flat hand on closed hand: normal. Closed hand to mouth: obvious. Three fingers up: 30 euros.

They'd probably also do it for 20.

Advertising has us convinced that cheap meat is something we can't live without. But the meat industry is based on exploiting both people and animals.

Germany has the resources to weather the storm, but not everyone in Europe is convinced that's a good thing.