Amid a wave of protests against the Paraguayan government's handling of the COVID-19 pandemic, one unlikely voice — that of a sharp-tongued, silver-haired abuelita (grandmother) — has stood out above the chorus of discontent.

One of countless people taking to the streets in the capital Asunción in recent days, the elderly woman has yet to be publicly identified. But her opinion of the country's president, Mario Abdo Benítez of the conservative Colorado Party, is now widely known following an impromptu interview Sunday with a reporter from the Paraguayan news outlet ABC TV.

"[We're here] resisting until that cabrón hijo de puta (bastard son of a bitch) falls," the bespectacled woman, wearing a Paraguayan flag as a cape, said of the president. 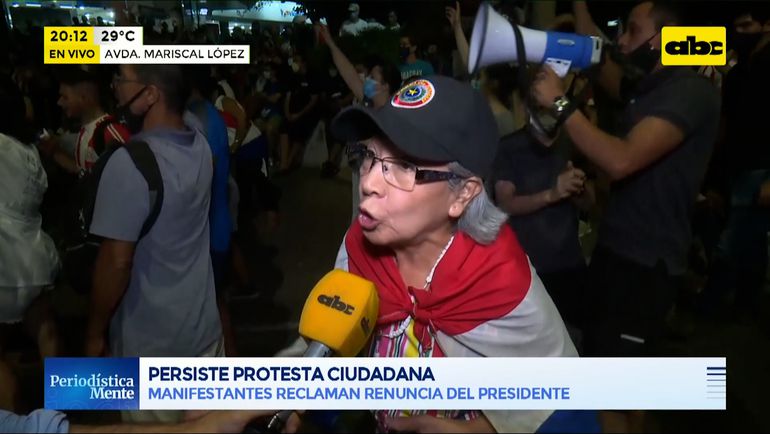 Abdo Benítez, elected in 2018, faces widespread criticism over what many people see as an inadequate response to the coronavirus epidemic. Barely anyone in the country of roughly 7 million people has been vaccinated, according to news reports, and with deaths and infection numbers on the rise, Paraguay's available hospital beds are quickly filling up.

Nevertheless, the government decided recently to reopen schools after eight months of lockdown. This move prompted demonstrations by teachers, who were soon joined by healthcare workers and everyday citizens. The Abdo Benítez administration responded by sacking several key cabinet officials, including the health and education ministers. But the protesters, including

"Don't think we're satisfied with three ministers being fired," the now famous grandmother said. "What we want is [the president's] head. Your head, little Mario. It's your head we want ... You're worthless, you son of a bitch."

Paraguay's Ministry of Culture says the real birthplace of the game the English named football, a...