Trump As Julius Caesar: The Threat To The Republic Lives On

An "Emperor Trump" float at a carnival in Mainz, Germany - Michael Debets/Pacific Press/ZUMA

With Joe Biden in the role of Brutus...?

Here in California, on the morning after the U.S. presidential election, I sat down and started writing, because even though there was no clear winner at that point, there was already plenty to say.

The results, in terms of both the popular vote and electoral college, turned out closer than predicted but also are not surprising. This is no time for celebration or commiseration, joy or gloating. Instead, the mood is one that has existed for a long time, but has rarely been mentioned, and now deserves our attention and contemplation.

Even The New York Times, which over the past four years has been a must-read for Trump's opponents, proclaimed on its homepage that given the significant number of votes for the incumbent president, Joe Biden's oft-used slogan "Donald Trump is not America" simply doesn't hold water — regardless of the final result.

The pollsters — at least in the United States — got it wrong. Trump has confirmed his reputation as an exceptionally successful campaigner. The fact that nearly half the voting public supports the corona-era president shows that 2016's result was no accident, but a paradigm shift that merits serious long-term analysis. Over the last four years that is exactly what typically left-leaning academics have, in their arrogance, failed to do.

The age-old question of whether changes that are generally viewed as positive can be credited as direct achievements of the leader in office at the time is irrelevant when large swathes of the electorate view them in this way. And this is especially true when it comes to Trump, who has never prioritized delivering on specific policy promises.

It's also a fact that since Trump's bizarre first contact with Kim Jong-un, the West's relations with the nuclear power of North Korea have been relatively tension-free. With American support, Israel recently entered into a new and potentially ground-breaking stage of relations with its neighbors in the region. And moving the U.S. embassy from Tel Aviv to Jerusalem was a recognition of where the seat of power truly lies, rather than a costly and pseudo-moral act of diplomacy.

The American economy was flourishing at the start of the year and — in the experience of most Americans, and regardless of experts' medium-term projections — it has not imploded over the past few months. We must emphasize, furthermore, that contrary to what pro-lockdown politicians in Europe predicted, U.S. voters didn't punish the White House for its lack of a comprehensive strategy to combat the pandemic.

The behavior is Machiavellian in the true sense of the word

The reality, though, is that there's only a superficial relationship between these day-to-day political decisions and the fierce loyalty of core Trump voters (as well as his ability to win support among new social groups, such as Latino men). Even if the president doesn't stay in office, he has managed to establish a new interpretation of the role and an alternative style of politics.

Part of that is an unashamed lack of scruples in holding onto power (by appointing as many judges as possible at various levels, for example) and in gaining advantages for himself (Trump hotels used as stages for political theater, family members appointed to White House positions). This behavior is Machiavellian in the true sense of the word. But it's also tolerated by supporters, thus legitimizing it. Without shying away from confrontation, Trump consistently uses every situation to his advantage.

Contrary to all the doubts of experts and insiders (even from his own party), in its first term the Trump administration has not experienced the unprecedented problems that were predicted. This is despite the president's incoherent tweets, the endless slew of firings, and the fact that Trump — perhaps unwittingly — occupies a political position that swings back and forth between left and right.

The populist Donald Trump, with his strong support among underprivileged citizens, seems left-leaning, and yet his tax cuts for high-income groups lean to the right. His withdrawal from military conflicts could be seen as pacifist and left-wing, but his prioritizing of national interests in economic and foreign policy is undeniably rightist.

This mix-and-match approach has produced a certain typological affinity with historical national socialism, although Trump's constant vacillations are a clear departure from its extreme ideological consistency. 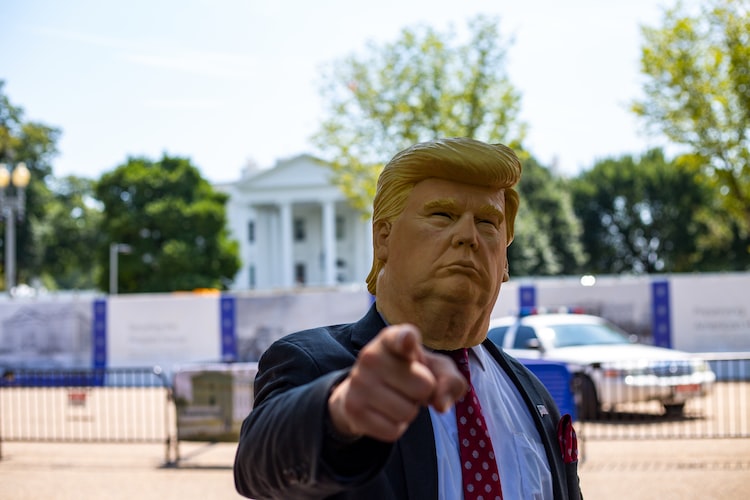 Masked, for once — Photo: Darren Halstead

At the heart of his political approach, which has set itself up in opposition to the traditions of government, is a form of communication with large swathes of the population that I call "resonance rhetoric." I use the word resonance because Trump supporters do not respond to specific, concrete details: He didn't have to deliver on his promise to build the infamous wall; he doesn't need to fact-check.

These groups, which for various reasons consider themselves underprivileged, respond instead to Trump's apparent directness and the sense that he takes them seriously. Even when he admits to lying (downplaying the dangers of the virus because he didn't want to "create panic"), they see Trump as authentic ("at least we know what he's thinking").

Why has Trump met this need for resonance, when a master of classical rhetoric such as Barack Obama failed? Is it a need that only exists in the United States, or is it also gaining ground in Europe? I believe that what lies behind it are two important crises about the principle of representation on which our parliamentary democracies are based.

The first is that in the United States, the 65% of citizens who are not college educated don't feel that they are represented by the intellectual elite who make up most of their government. And I think they rightly sense condescension from left-leaning intellectuals who claim to understand the needs of the financially underprivileged. This could also be said of the Trump regime, but his communication style meant it was not a source of frustration.

The second is the impersonal distance of now omnipresent electronic communications, which it was hoped would lead to growing participation in political processes. Now we know that, instead of enabling better communication between citizens and their representatives, this technology makes daily life more complex and leads to social isolation.

The sociological and technological developments of the last few decades mean that representative government is no longer functioning as a vital form of communication between people and politicians. It is seen as a blockade on immediacy and the exchange of ideas.

These could be symptoms of a growing weariness with the classical institutions of the republic.

Since the Enlightenment, the global dominance of Western cultures allowed them to hold up forms of government based on representation as a norm, free from all claims of cultural relativity. I believe we must hold true to this concept, but we must also ask ourselves whether its status has become precarious.

There is the trend for family dynasties, across the world but especially in the United States (the Bushes, the Clintons and growing pressure on the Obamas); Trump's success and the widespread tolerance for his long-predicted strategies to hold onto power regardless of the election results; but also dwindling interest in political careers among younger generations and perhaps an increasing willingness to take the role of monarchs more seriously than before.

All of these could be symptoms of a growing weariness with the classical institutions of the republic.

Trump's political career brings to mind two names from classical history that are always mentioned side by side: Marius and Sulla, two generals of the Roman Republic, who as a man of the "people" (Marius) and a descendant of an ancient patrician family (Sulla) led the republic to civil war in the early 1st century B.C.

Surprisingly, both died peacefully after (more or less) voluntarily withdrawing from politics — Sulla during a heavy drinking session, still promising to write his memoirs (something I can't imagine Donald Trump ever doing). But a generation later, Marius's family rose to power again through Julius Caesar, who oversaw the demise of the Roman Republic and the rise of the Roman Empire.

Would such a thing be impossible now? Or is there potential for such a seismic change in America? In Western history, it is Julius Caesar who is remembered as one of the great heroes — not Brutus, who killed him to save the Republic.