When Algorithms Create Our Culture

Music, books and other intellectual artifacts are increasingly being produced automatically by machines. A new book explores the ways in which artists exploit this new reality.

GENEVA — The word "algorithm" goes back a long way. All the way back to the Abbasid caliphate 12 centuries ago, as a matter of fact. The word comes from the name Muhammad ibn MÅ«sÄ Al-Khwarizmi (which in its Latin version became "algoritmi"), a mathematician born around 780 in what is today Uzbekistan and who died in Baghdad around 850. Because of him, the West learned algebra.

Modern algorithms, those destined to run on computers, came much later, in the middle of the 19th century, with the computer science pioneer Ada Lovelace. The structure of our world's digital programming thus relies on the work of an Englishwoman from Victorian times and that of a Persian, Arabic-speaking man.

An algorithm is a series of instructions applied systematically. Give commands to a machine and it will assist you. Feed it with an algorithm and it will start doing the work on its own. Algorithms are able to conduct trading, to offer personalized shopping recommendations on sites such as Amazon, to automatically write news dispatches on sports or finance, and lately, to create art.

Nicolas Nova and Joël Vacheron, two Swiss experts in digital culture, are particularly interested in what happens when algorithms are entrusted with the production of artifacts. This is the sphere they explore in their recently published book, Dadabot, Essay about the hybridization of cultural forms (music, visual arts, literature) produced by digital technologies.

As examples, they cite the algorithms written by California composer David Cope, which means a machine can create pieces that sound like Bach, Chopin or Mahler, or even like a Scott Joplin ragtime, depending on your choice. There are also the algorithms behind the Ghost Writers project of Vienna publishing house Traumawien. In 2012, it set about invading Amazon's virtual shelves with a massive number of ebooks automatically produced from comments posted by Internet users below YouTube videos.

Nova and Vacheron regroup all of these experiments under the term Dadabot (half dadaism, half robot), which it borrows from Boston musician CJ Carr, whose blog Dada Bots Industries gathers "virtual artists" who remix pop songs such as Queen's "Bohemian Rhapsody." Other authors prefer the term "uncreative," forged by New York poet Kenneth Goldsmith, theorist and practitioner of "uncreative writing."

After flourishing in the margins of artistic and intellectual production, robotic dadaism and uncreative writing are now becoming mainstream. David Cope participated in the creation of the JamBandit app, which enables users — even those who can't play an instrument — to improvise baroque, jazz or hard rock music with the cheek of a virtuoso.

In another, less artistic field, management specialist Philip M. Parker has developed an algorithmic tool to automatically write with a proper layout studies on any subject based on data available online. In 2008, Parker thus claimed to having produced some 200,000 books.

Other artists build their works by using pre-existing algorithms, for example the almighty Google algorithms. This is how Matt Farley, a Manchester-based musician, director and humorist, developed his project Motern Media. He creates his songs the old-school way, with his voice and piano, but at a frenzied pace (it takes him "between five minutes and an hour" to create a song) and with titles that touch on an infinite number of more or less trivial topics of contemporary culture. These include, "Scarlett Johansson Has Good Taste," "Oedipus Made Several Mistakes" or "What Is the Difference Between a Frappe and a Milkshake."

Farley then publishes his songs — he has about 18,000 of them — on Spotify, and waits for Internet users to stumble upon them as they search for any related words on Google. Though each time someone listens, he earns only a pittance, enough people do so that he earns a decent living. Plus, as California musician Holly Herndon said in an interview for Nova and Vacheron's book, "We've accomplished everything we could have accomplished with guitar music, 1980s ghetto subculture and the intellectualized melancholy of techno raves." So why not explore other fields indeed.

In any case, and more generally in algorithmic culture territory, creation implies other people's participation. This can now happen through the virtual participation of absent entities, such as Mahler or Freddie Mercury. This reminds us of what French philosopher Jacques Derrida used to call "hauntology," a portmanteau word made of "haunt" and "anthology" and used to describe "the accumulation and resurgence of ghost-like traces of the past in creation."

The algorithmic artifacts often imply the participation of the ordinary web user, more or less without his knowledge. Google's algorithms would be nothing indeed without our search requests, which feed them and boost their strength.

"In much of the software we use everyday, the part done by the machine is just the tip of the iceberg," says Italian artist and designer Silvio Lorusso in one of the interviews for Dadabot. "Take, for example, Google Translate: It only works because it can harvest from a huge quantity of human-produced documents. Human work is more and more hidden and presented in pure artificial intelligence form." 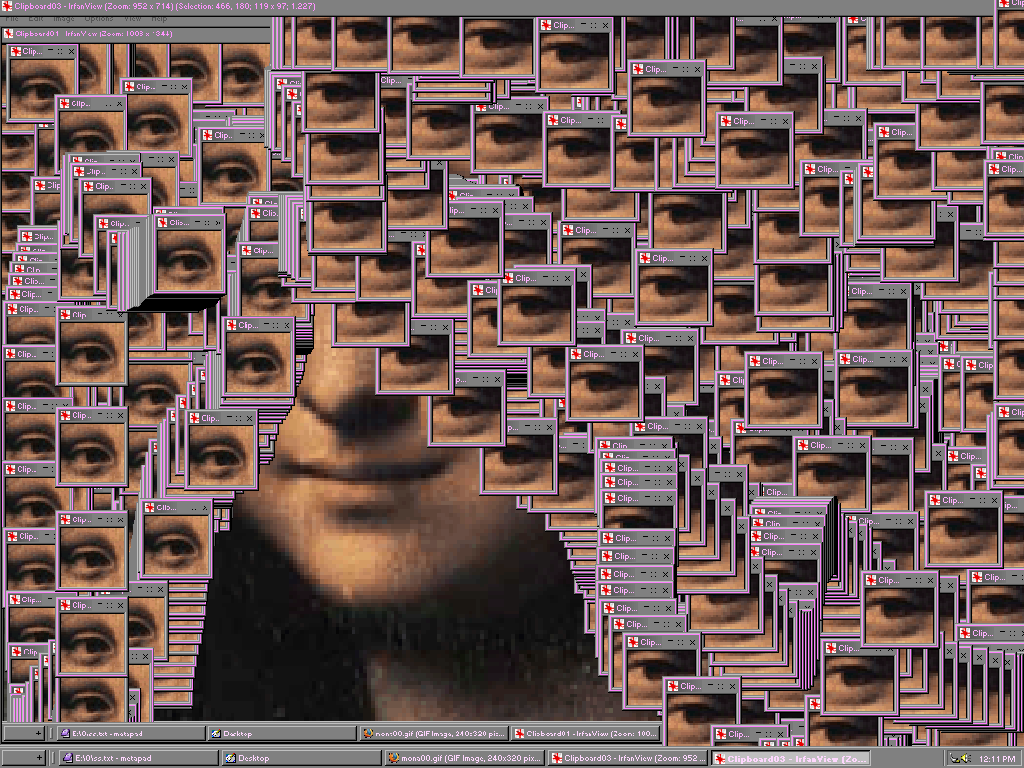 In today's digital environment, you could say that "to read is to write," Lorusso says. To explain this new order of things, he launched the Networked Optimization project in collaboration with his German counterpart Sebastian Schmieg and that (unintentional) of Kindle readers. Using the most highlighted excerpts in personal development ebooks enables Lorusso to obtain "network optimized" versions, making a vaguely monstrous hybrid of pop psychology and wisdom.

But robotic dadaism also has political implications. "Who writes these algorithms, based on what decision?" asks Dutch artist Constant Dullaart. "Here's the most radical change that needs to happen: These algorithms, these ways of seeing how information is processed, need to become public. They should be made easy to access while being submitted to a form of control or comprehensive scrutiny," he says.

There is indeed the risk that, fed by the largest number of clicks and by our own habits, algorithms can make it more difficult to access everything that lies in the fringes of our personalized mainstream. "The gap will continue to widen," Dullaart says. "Mainstream will become even more mainstream, and subcultures will become even more subcultural and hidden."

It's important to note that Dullaart also invented the concept of "balconism," which describes our way of life in the digital age. "It's exactly as if you were on a balcony," he says. "There are always people passing by your building and they can hear you. At the same time, it gives you the impression to be somewhere private, you feel at home there. That's what I mean when I say that we're all on the balcony."