What Freud Got Wrong About Sadness And Mourning

Much of what we think we know about sadness is still based on what the father of pychoanalysis wrote 100 years ago, but psychologists and brain researchers are starting to discover more about the feeling's true mechanisms.

BERLIN — Heavy hearts in autumn. For many who have lost a loved one, this dark season makes grief resurge. This might be beneficial for finding peace of mind, but it doesn't necessarily have to. Too often, the bereaved suffer because of unreasonable expectations — and sometimes pretty useless advice from friends: "Let the pain in," or "It's about time to return to your old life."

Grief is an important human feeling that has never been studied thoroughly. The perception we have is partly still based on the assumptions neurologist Sigmund Freud made over 100 years ago. Scientists today are trying to discover more about grief and sorrow and lready, they have demonstrated how frequent pathological sadness is, and what exactly happens in an affected person's brain.

"If you know nothing about the grieving process, it's simply impossible to understand how the mourning person truly feels," explains grief counselor Uta Schmidt.

After a death, there is significant psychological strain, and the pain of the bereaved simply cannot be put into words. There is deep grief and yearning, sometimes anger, despair, guilt, resentfulness or the fear of being alone.

Anything might trigger these feelings. "Empty beds or chairs are a constant reminder of what's gone forever," Schmidt says. Some perceive the loss like an amputation and often experience physical issues such as loss of appetite, palpitations or insomnia.

Schmidt says that many people in mourning consult her because they fear they're going crazy.

Sigmund Freud, the founder of psychoanalysis, argued in his book Mourning and Melancholia, published almost a hundred years ago (1917), that grief must be addressed by intensely thinking of the lost loved one. According to Freud, mourners should accept and consciously live through the grief.

The converse argument would be that those who show little to no emotion about their loss run the risk of being overwhelmed by it later. Or that the missing grief reveals something about the quality of the relationship. In the end, the only way to return to life and normality is by finding true closure.

"After experiencing several losses himself, Freud had come to the conclusion that he might have been mistaken," explains Kathrin Boerner from the University of Massachusetts in Boston. 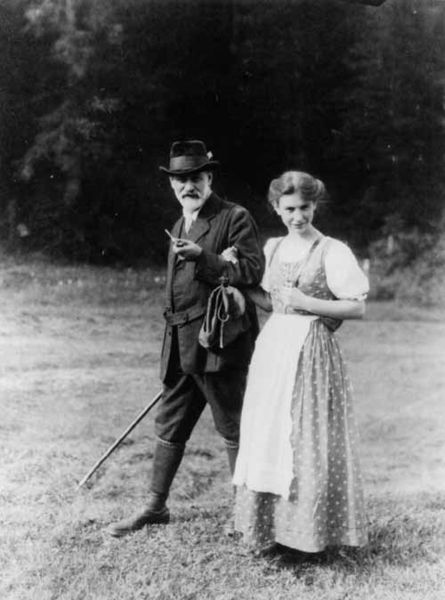 Sigmund Freud and his daughter Anna in 1913 — Photo: Library of Congress

The mental space that thoughts about loved ones take up diminish with time, compared to everyday life. But grief isn't a clearly distinguished phase with a clear end to it, says Boerner. "The connection changes, but there usually remains an important ongoing inner connection no matter what."

Not a pathological process

As a matter of fact, many experts believe that those who are constantly dealing with their loss run the risk of becoming unable to return to normalcy. In the worst-case scenario, mourning becomes pathological. But even if the emotional roller coaster fuels the fear for one's own mental health, mourning has nothing to do with a pathology most of the time. It is instead a very normal reaction. "It's the reverse side of the connection," explains Anette Kersting from University Hospital in Leipzig.

But when does the fear of losing one's mind become founded? One indicator is if the mourning remains dominant after a significant passage of time — Kersting speaks of 14 months — and affects the person in everyday life. But Kersting's and others studies show that this pathological form of mourning affects only 7% to 20% of people.

It's not just about the duration of mourning, Boerner says. "From the beginning, those people live their grief differently." It's typical in this pathological form of mourning to constantly think about the grief, but also to try to escape the pain. For instance, people will avoid activities that remind them of the lost loved one. They let the grief build a wall around them, and they can't break it down on their own.

Several factors need to be considered to deal with loss: the circumstances of the death, the type of relationship a person had with the decedent, age and sex as well as personality. "There is one critical factor: previous psychological difficulties," says Boerner. In other words, emotionally unstable people have a particularly hard time dealing with loss.

Men tend to struggle more than women because they often lack a supportive and stable social network. "Most of the time, women are the ones establishing and cultivating the couple's social contacts," Boerner says. "Men's main attachment figure, on the other hand, are their wives." If she dies, a man's central figure and his social networks are gone.

A changed part of the brain called nucleus accumbens has been detected in patients suffering from pathological grief. This part of the brain is responsible for gratification and dependence, which might explain why those people can't stop thinking about the deceased. By doing so, their brain rewards them — the way a drug would.

It's not the new scientific findings that shape people's image of grief, but rather obsolete and disproved theories. Another example, similar to Freud's findings, is the 1970s stages model of Elisabeth Kübler-Ross, according to which mourning people go through five phases: denial, anger, bargaining with a higher justice, depression and, finally, acceptance.

This simple model predicts a potential end to the process of mourning and suggests that all you have to do is go through the process, step by step. But experts disagree. George Bonanno, a psychologist from New York's Columbia University, discovered in 2002 through an extended study that the five-stages model doesn't apply to 90% of people in mourning.

Nearly 50% of people participating in that study claimed that they were feeling reasonably good 18 months after the death of a loved one. And this was especially true for those who had always been emotionally stable. Boerner stresses that there are "a variety of mourning processes that can be qualified as healthy."

Kersting refers to a different model that has been developed by Margaret Stroebe and Henk Schut from the University of Utrecht. They describe two "poles," one rotating around death and loss, the other around the present and future. "Mourning people oscillate between one or the other," Kersting says. The farther someone has come in finding closure, the more he'll concentrate on what lies ahead.

The model also seems to reflect the experiences of the bereaved, who have moments of gratitude and joy — for instance, when thinking of a common vacation. Schmidt advises people to seek these moments actively, even if they feel they are expected to show pain. She also stresses that she sees that "people feel being judged by society, even if this clearly isn't the case."

Friends, neighbors and colleagues often don't know how to address the topic and are afraid of saying something wrong. But what can they do? Listen, says Schmidt, help the mourning person to understand the pain, encourage them to take new directions — and show compassion. "They feel supported if their personal approach and choices are accepted by their environment."