Our Prehistory, When Mankind Was Kinder

What a guy - Erix

Scientists are increasingly revising the idea of human nature as inherently competitive and violent. A documentary explores the possibility of a prehistoric "utopia," when people lived without cruelty or war.

LAUSANNE — There was a time when there was no violence. It's not a dream, a fable or mere philosophical speculation. The sciences of archaeology, anthropology and evolutionary biology, along with studies of the brain and psyche, are increasingly reconstructing a profile of human nature characterized by empathy and cooperation. It's in sharp contrast to the more generalized perception of humans as inherently violent and competitive.

Knowledge of human nature is also allowing us to imagine a world without massacres, wars or brutality. Indeed, none of these are inevitable considering who and what we are. French physician, therapist and film director Michel Meignant has explored this in a documentary that is currently in production and seeking online funding. And we spoke with two scientists participating in the making of the documentary.

Archaeology suggests that violent death inflicted by one human on another was for a long time a highly rare phenomenon. National Center of Scientific Research (CNRS) scientist and prehistory expert Marylène Patou-Mathis explains that she wrote her book, Prehistory of Violence and War, because of her "irritation with always hearing the same thing — that we are violent, that human nature is thus and that this has always existed — when such affirmations are baseless. As a scientist, I thought, let's investigate the data." What she found was that while violence was very rare in the paleolithic age — from about two million to 10,000 B.C. — it did exist in particular circumstances. "Its first traces relate to cannibalism," she says. "This could consist of a funerary rite or even rituals of human sacrifice where the victim is then eaten to unite the group. Everyone is made complicit, as it were, through the cannibalistic meal."

But why the sacrifice? "They sacrifice something very valuable, namely a member of the group, to try and find an answer to a problem — a major crisis like an epidemic or famine," she says.

This contradicts accepted ideas suggesting that competing for resources triggered primitive violence. "The generalized perception is that violence likely began with an attack on someone to take something from them," she says. "There are a lot of myths like this circulating without basis in any archeological or anthropological considerations. There is the abduction of women, for example, which is a projection of 19th century society."

Not that it was all champagne and roses

This is not about turning our ancestors into angels. "One mustn't confuse violence with aggressiveness," she warns. "The latter is a reflex, is bestial and allows us to survive." This natural aggression, a defense mechanism, has to do with being predators. "Hunter-gatherers kill animals to eat, but there are also rituals before, during and after the hunt. We know of no hunting people without such rituals. They need it to be able to kill an animal, which is their neighbor, so akin to themselves and like a brother."

Nor does absence of violence signify absence of conflict. Patou-Mathis says she has observed "there is very little violence" among the San people of the Kalahari region. "When there is a quarrel, everyone gathers. If they can't find a solution, there is a split: One group takes one of the disputing parties with them."

Archeology even allows us to retrace the prehistory of empathy, she says. "We see it when we find skeletons with debilitating injuries or congenital malformations. There are many cases, like the Neanderthal found in Iraq's Shanidar Cave. He was missing a forearm and had lived for more than 40 years, which means the group took care of him and had not rejected him or left him to die."

And though we don't have the archeological means of knowing how paleolithic children were raised, she says that it's clear at least that hunter-gatherer peoples didn't use violence to teach children. "There is no smacked bottom or slap on the face," she notes. 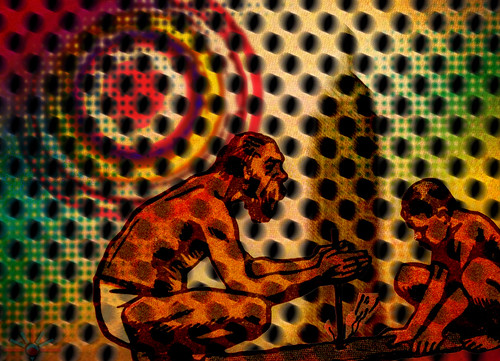 How then did this early, peaceful humanity become brutal? Patou-Mathis says that it happened as humans became more sedentary. "That entails economic change and domestication of plants and animals," she says. "Hoarding and personal goods start to appear. In this time, we see how rock paintings depict some figures as bigger than others: elites."

The only sedentary groups without violence were small cultivator societies. "The issue of numbers is crucial," she says.

The "soft" brutality of education

There are two categories of violence against children, both transmitted between generations and creating links between individual violation and social harm. Cornelia Gauthier, a Swiss therapist and author of several books on child and family abuse, has studied both types of violence, but especially its most common forms.

"Mistreatment is to do with people who were once treated badly themselves," she says. "Practically everybody commits ordinary educational violence, more or less without knowing it, and thinking they are doing the right thing. It's the idea that the child needs it to become someone half-decent."

This type of violence consists of threats, shouting, ignoring a crying child and the odd smacking or face slap. "It is considered benign, even beneficial, when it could very well be the breeding ground of all other acts of violence," she says. "It damages the child's capacity to empathize, and could in time allow adult forms of violence to flourish." These little punishments, she says, are a "language you learn when you're little, considering that children learn by copying. The education model we implement determines what the child will later perceive as good and normal."

But in eliminating all the "soft" violence from the educational arsenal, are we not going to turn our children into little princes? That's another common misperception, Gauthier says. "Would you let your child do absolutely anything? Clearly not. The child needs limits, and actually seeks them."

When the adult says no, the child tests to see if the limit is real. Saying "don't touch the remote control" will prompt a 2-year-old to try and touch it — in an act of verification, she stresses, not disobedience. That's because his little brain registers "remote control," not the caution not to touch. To clarify such instructions she says, "repeat, 'don't do it,' calmly and firmly, without threats. That will have an appeasing effect on the child," and allow him to grow up without "the emotional blocks" chiding creates.

Gauthier believes educational violence appeared after humans became more sedentary. "Birth numbers increase from hunter-gatherer societies, and the older children were perhaps separated from their mothers so that the young ones could be breastfed. That must have prompted the older children to become aggressive and hit their siblings," she says. "The mother, whose suckling hormones ensure a hyper-aggressive response if her baby is touched, likely then began to hit the older child. It is a plausible hypothesis to explain the appearance of violence in the immediate family circle."