The "devs" who code our digital world are so rarefied and vital they can dictate their own terms. Companies do anything to recruit them, but like birds, they tend to fly. A look at this singular species.

PARIS — Developers are volatile, strange birds that require lots of attention and nurturing if their employers don't want them to fly away. As Fabien Devos, a smiling T-shirt-clad thirtysomething, says, "If things don't work out, I'll leave."

For the time being, he's exercising his computer science talents at Upthere, a Palo Alto, California, start-up created by Bertrand Serlet — the "Frenchy" behind the Apple computer operating system. "He's definitely somebody to be reckoned with," Devos confides. "But at work we don't put out enough products. I need constant feedback from users." So he spends his evenings and weekends on Hacked, the game he and a colleague have been refining for four months. "There were 10,000 downloads the first day," he says jubilantly.

His employer has no problem with his side project. Bertrand Serlet even gave him a week off so he could finish it before its release. There are other people with the kind of qualifications Devos has, but not many. Which is why he can be choosy.

Big and small dot.coms alike want to employ people like him, not to mention major car manufacturers and banking multinationals. Devos started out at Bouygues Telecom where, as a trainee, he developed the Suivi Conso app. He went on to a large Paris agency, where he worked for Dailymotion and AlloCiné, then crossed the Channel to work at a London start-up. From there he moved to the United States for a job at Facebook. But he doesn't think big companies are all that great. So he left the Mark Zuckerberg network for Upthere.

Slowly but surely a set type for developers is emerging: defiant, not to say rebellious, sneakers and long hair, geeks among the geeks. There are few women, and they are often young and eccentric. They refer to each other as "devs." They view the world through lines of code, testing, failing, starting again, until they've found the key. Engineers build highways and bridges, "devs" build digital works that give meaning to objects.

Without these digital creators, an iPhone would just be an expensive empty shell. "Digital is devouring the planet, and devs are living in the golden age," says Nicolas Petit, the No. 2 at Microsoft France. So with the winds of history in their favor, it's not surprising that they're taking advantage of that fact.

The developer is a rare bird, a species so sought after that some California developers have agents managing their careers, says Nicolas Sadirac, director of l'Ecole 42, one of the rare schools in France to offer developer training. Developers are like Hollywood stars, and they too have their artistic side.

"You can write beautiful code just as you can write a beautiful book," says Daniel Marhely, founder of Deezer. He can spend three days just thinking before he starts tapping on the keyboard. "A beautiful code is quick, effective and readable by everybody." 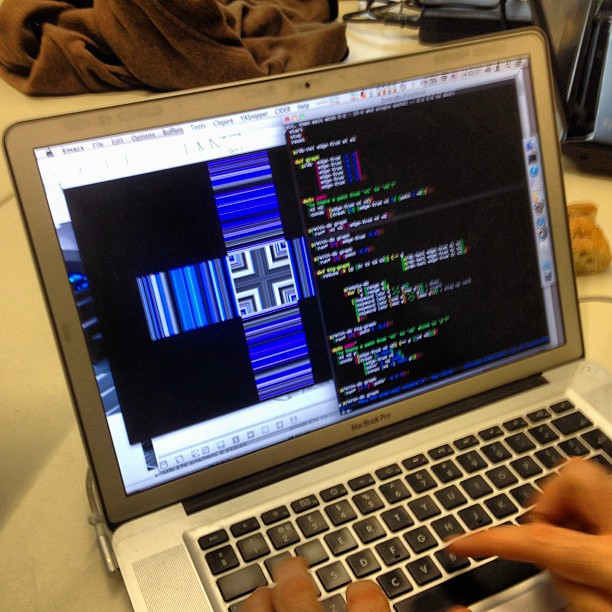 As a general rule, developers start young. "A good dev lives for developing," says Guillaume Roques, who heads developer relations at Salesforce, a pioneer of online software. "They are creatives who get the greatest pleasure from starting from zero to resolve a given problem using nothing but their brain."

Examples include Alexandre, lead dev at a telecom who created a "virtual dressing room" app for his girlfriend. "She asked me for something that would make it possible to choose her outfits without laying everything out on the bed," he explains. One of his friends even concocted a contraction counter for his pregnant partner.

Or take Nicolas Vareille, who's just 20. A student at the computer science school Epitech, he's been programming at night since his teens, inventing "things I can use in my life." He holds out his wrist to show a watch he developed. It's equipped with a Tamagotchi, the little virtual animal that was a favorite of childen of the 1990s. Coding "is a passion that often keeps me up until 4 a.m.," Vareille says.

Alexandre, who gets up at dawn to work, says developers must be sponges, interested in everything. "The rest of it, the technical part, you learn," he says.

Their illustrious elder Alex Dayon, the 47-year-old president of products at Salesforce, would feel nostalgic listening to these tales. When he was starting out, the term "geek" had yet to be included in the Larousse dictionary. "Somewhere we're rebels who want to change the world," he says. "Psychologically, we consider ourselves misunderstood geniuses."

At Salesforce, the developers choose what they want to work on at a "fair" held every six months. "Project heads fight to get the best people," Dayon says. "The whole employer/employee thing is reversed."

The story of another Alex, star developer at the big California start-up Evernote, confirms that their world is upside down. To keep him, Alex's employer rolled out the red carpet. These days, Alex is in Paris, where he's putting a team together for the company.

The champs are so difficult to recruit that it's better to focus on keeping them, no matter the cost. "The really committed ones, the ones that are five times more effective than the others, you don't find on LinkedIn," Daniel Marhély explains. "And there aren't any rules: They may be graduates of the big engineering schools or not even have a bac — a high school degree. You find them by word of mouth and then you have to convince them. In France, devs aren't motivated by money. I have a killer here, for example. He's never asked me for a raise — I just keep raising his salary."

Marhély won't even say the name of his keyboard virtuoso for fear of losing him. That's because developers are like migrating birds. Because there are so few of them, they have a lot of options. When Mathieu De Brito, 28, returned to Tours after a stay in Québec, he had five offers before he even got on the plane. He finally selected a start-up specializing in GPSs for bicycles.

"What I'm mainly looking for is a job I like, not just something to pay the bills," says Brito, creator of the Android Jedi lightsaber app. The prospect of unemployment doesn't scare them. If they have to, they’ll develop a few apps, some of which can be ready in a matter of hours for those who know the "recipe."

A project head at Rue du Commerce, Patrick Bouliou is a master of the technique. Right now he's developing a series of learning tools on how to recognize types of tree, stars and animals. His creations have been downloaded 15 million times — which brings in 3,000 euros in a bad month and 8,000 euros in a good one. "There was less competition when I started out," he says.

There is an estimated shortage of 100,000 developers in France, in part because many of them opt to move to the United States. "At 30, you're faced with a delicate choice," says freelancer Romain. "Either you give up coding to become a manager or open your own company, or you leave to find a job you like that pays better. Here, there aren't all that many." 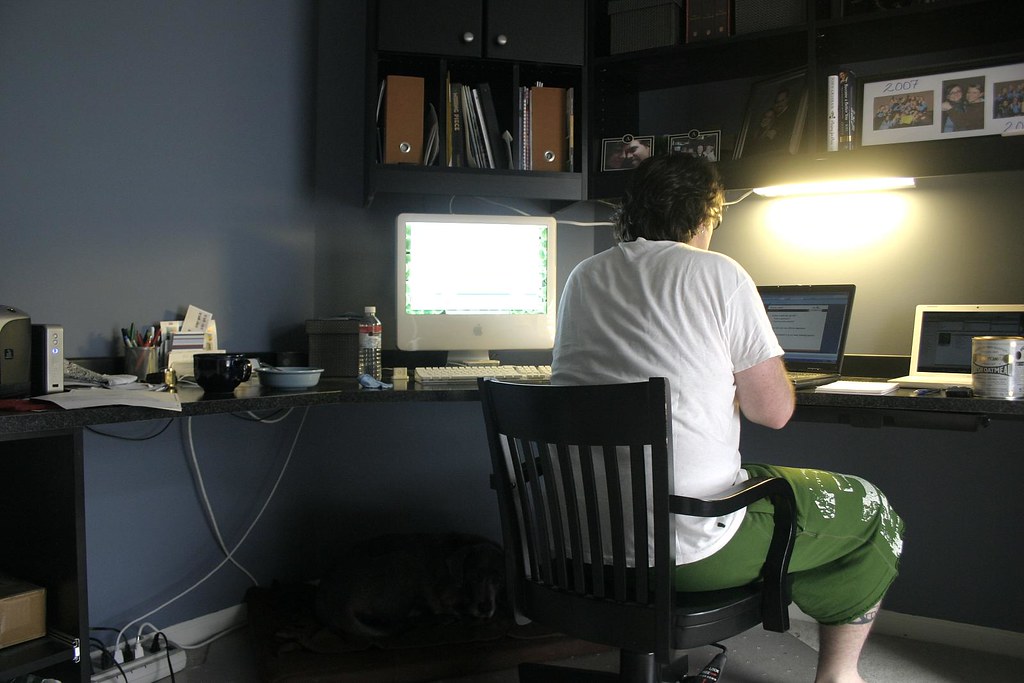 There may be several hundred high-end developing jobs in France, a thousand tops. "In France, there are a lot of software engineering companies but very few software creators," says Nicolas Petit.

Romain takes a day off every week to devote time to his future company, but many others his age have opted to leave their jobs. Frédéric Rose, director general of Technicolor, can no longer count the number of "thirtysomethings who want to be transferred to California." In general, they manage to get there and find their own private mecca somewhere in San Francisco or Silicon Valley.

"I warn them that over there if you show up bleeding at the hospital they ask for your bank card before administering care," the Franco-American adds. But "over there," developers are rock stars driving Teslas whose salaries are never below six figures. "Right now it's the revenge of the geeks against Wall Street," Dayon says.

Developers don't have the same status in France. "In California, you get these mercenaries prepared to quit a month after they've been hired," Marhély notes. "Here, they're more loyal. They still don't fully understand the power relationship."

But things could change. For one thing, it always takes time for "class consciousness" to take hold, as a Marxist would say. Think of the unknown Viernamese developer who made a fortune thanks to creating a silly game called Flappy Bird. "That gives everybody ideas, including us," says Alexandre.

These obscure developers who suddenly do something big are what Florent Castelnerac, founder of the Nadeo video game studio, calls "amateurs." He means that as a compliment. "They have a huge future in video games. They can spend 400 hours on a single detail," he says almost enviously.

Jocelyn Demoy, lead developer for a software company, spent 800 hours over the space of two years on Space Corsair, his dream game. "Profitability is secondary to us," Demoy says. "We just want to generate additional income, add a line to our CVs. And, mainly, code without constraint."

In Montreal, at the Ubisoft studio where the last Assassin's Creed was created, developers don't leave except to form their own companies, claims studio head Antoine Vilmal de Monteil. But even he feels compelled to stimulate them. The expat Frenchman regularly organizes two-day team "challenges" to create the draft of a game.

"We want to take them out of their comfort zones," he says. But for these birds, what's most important is flying. Like Jonathan Livingston Seagull. Digital version.

Work → In Progress: Why Our Work Days Will Never Be The Same Again

The world found out quickly that COVID-19 would be a major interruption to the way we worked. By now, there is little doubt that the health pandemic — and resulting lockdown measures and ...

Eight months after the initial warning signs, we still know very little about how the coronavirus works. Decision-makers will have to play by ear for many more months.