Back in 1965, the Italian office machine company launched the revolutionary P101, used by NASA and later copied by U.S. rivals.

TURIN — "I dreamed of a machine able to learn and then quietly execute, a machine that allows us to store instructions and data, but whose instructions were simple and intuitive; a machine that could be used by everyone, not just a handful of specialists. For this to be possible it had to be affordable, above all, and be about the same size as the other office products people had grown accustomed to using."

The words were spoken by Pier Giorgio Perotto, the lead engineer on the Olivetti team that built the Programma 101, the world's first personal computer.

Years before Steve Jobs and Bill Gates struck gold, the Italian typewriter manufacturer paved the way for the PC revolution, launching the Programma on October 14th, 1965 in New York City. Back then, the idea of having a computer on your work desk or in your children's room began as a dream, relentlessly pursued by a brilliant team of engineers working for one of the world's most successful companies in the typewriter and calculator sector.

Among the first to understand the P101's potential were the scientists at NASA, which bought 45 of the machines to chart the lunar maps and determine a flight path for the Apollo 11 mission, eventually putting a man on the moon four years later.

The P101 unveiling was held at the Waldorf Astoria, with Italy's beloved public television correspondent Ruggero Orlando presenting, followed by a show-and-tell style demonstration. Hundreds of articles reported the news over the following days of the "first desktop computer of the world." The New York Journal-American wrote: "We may see a computer in every office even before there are two cars in every garage."

Recounting the story of one of the most revolutionary inventions of all time fell to its top engineer, Perotto, who in 1995 published a memoir, The Invention of the Personal Computer: A Fascinating Untold Story.

Olivetti's adventure into the world of electronics started in an experimental laboratory in the Tuscan city of Pisa — where the Elea 9003, Italy's first commercial transistorized mainframe computer, and one of the first in the world, was created in 1958. When the lab director, an engineer named Mario Tchou, died in a car accident in 1961, research operations were shifted from Pisa to the outskirts of Milan, about 170 miles to the north. There, computer-related work eventually had to be pursued in secret, once Olivetti sold off its electronics division to General Electric in 1964, keeping only the historic business of mechanical typewriters and calculators.

A new profession was born, intermediary between man and machine.

But far from the main headquarters in Ivrea some 65 miles away, where the mechanical calculators were produced, Perotto, along with fellow researchers Giovanni de Sandre and Gastone Garziera, quietly continued their work in the Milan lab, designing their own "electronic calculator" for Olivetti — a veritable computer.

By 1963, the latest innovation in information technology was the super-advanced Programmed Data Processor-1, a so-called "mini-computer" released by the Digital Equipment Corporation in the United States. It took up an entire wall, cost $100,000 and was used in a very few, specialized laboratories.

In those days, installing an electronic calculator required a large air-conditioned room to dissipate the heat, and a round-the-clock presence of technical experts ready to intervene. It was tough to keep running for more than a few hours at a time.

Thus, a new profession was born: that of the programmer, intermediary between man and machine. The introduction of transistors (to replace the heat-generating vacuum tubes) gave birth to a second generation of electronic calculators that were more reliable and practical, but no smaller than their predecessors. The difference in size between them and the machines then in use in offices — desktop typewriters and calculators — was still enormous.

In short, in those days it was all about developing memory and computing power, but no one seemed interested in making these calculators more user-friendly: no one was working on simplifying their use for the general public. In Perotto's words, "Man was expected to adapt to machine and not vice versa. Between the end of 1962 and the beginning of 1964, it wasn't a solution that began to take shape in my mind so much as a dream: the dream of a machine which prioritized not just power and speed, but rather functional autonomy. A machine not just able to perform complex calculations, but also to automatically manage the entire processing procedure, under the direct control of man."

Perotto recounts how in the Milan lab they fashioned a tiny memory from a bit of iron wire, with data input and output handled by a little magnetic card, which could also serve as permanent memory or as a data storage unit — the ancestor of floppy disks and memory sticks. 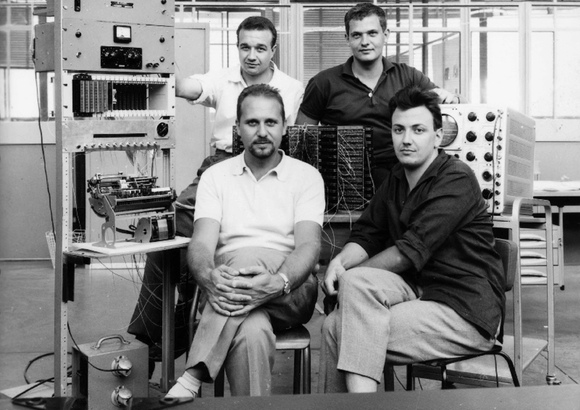 The keyboard and printer were the work of Franco Bretti, Olivetti's designer. The most delicate part was the programming system: the team served up a completely new one.

"It turned out to be very simple, extremely intuitive, with just sixteen instructions that could be used to compile the mathematical formula of the operations to carry out. A kind of BASIC programming language before its time," Perotto writes, referring to the Beginner's All Purpose Symbolic Instruction Code invented at Dartmouth College, the first version of which was published in 1963.

Users of the Programma 101 could write their own custom program using the available instructions, or choose from several programs pre-recorded on the magnetic card: the length of the program wasn't limited by the card, since the programs could be used one after the other in sequence.

The machine was assembled at Olivetti's main Ivrea plant in November 1964, with a young architect, Mario Bellini, handling product design. One can't help smiling when reading Perotto's descriptions of what the marketing men had to say: "They said it was neither one of the big wall-sized electronic calculators, nor was it a desktop calculator, thus there wasn't a market for it. The proof was that none of Olivetti's competitors had put out anything like it."

But the P101's public success would soon prove the marketing experts wrong. The machine was brought to New York to unveil along with Olivetti's other new products.

The public's first reaction was disbelief.

Perotto and his team created several programs with calculations applicable to civil engineering, electronic circuit design, and even a few games. The calculator, known until then internally as the "Perottina" in homage to its creator, was rebaptized: "Programma" recalled one of the exclusive characteristics of the product, while the number "101" was picked because it sounded good in English.

The public's first reaction was disbelief, with some even asking if there wasn't a large calculator hidden in the wall behind. But the skepticism soon gave way to great enthusiasm.

Perotto even participated in the live presentation, playing a kind of mathematical dice game in which man and machine were pitted against one another and challenged to reach a specific number without surpassing it. Often the engineer lost, and the presenter would exclaim, "The Programma 101 even manages to beat its own inventor!"

During November elections the following month, five Programma 101s were used by NBC television stations to calculate the results that would be transmitted to millions of viewers in the New York and New Jersey areas.

One of the revolutionary characteristics of the P101 was that it was mass produced: never before did a commercial product offer so much computing power concentrated in such a small, light body. Fundamental applications, like calculating depreciation, mortgages, and payroll, were also easy to execute. The press celebrated its small size, the idea of the magnetic card, the programming language and its user-friendliness.

In 1966 another two hundred P101s were produced, ninety percent of which were sold abroad, above all in the United States, at the price of two million lira in Italy and $3,200 in the U.S.. Production soon ramped up to hit 44,000 units.

The official presentation in Italy took place on April 7, 1966 and the Italian press also covered it prominently. But Olivetti's competitors didn't sit back and watch. On June 10, 1967 Hewlett Packard paid $900,000 to the Italian company, recognizing it had violated the patent on the Programma 101 with its new model HP9100.

Olivetti ended up deciding to invest more in its typewriters and calculators than in computer electronics, which left an open path for competitors (old and new) to follow into what would become a massive global PC market.

MILAN — In March, the first coronavirus outbreak in the West put Italy's hospitals under ...