A High-Tech Map Of The Himalayas Could Save Your Life

On top of the world. - Mckaysavage

Nepal has commissioned meteorologists and geologists to remap the wind systems, mountains and valleys on the "Roof of the World." It could help us predict natural disasters.

JOMSOM — Air traffic usually comes to a standstill at 10 o’clock in the morning at Nepal's Jomsom Airport, known as one of the world's most dangerous airfields. Turbulence, caused by thermal winds, is a daily occurrence in the valley that runs all the way from the gently rolling hills of Nepal up into the heart of the mountain range, which stands at over 26,000 feet.

The sun heats up the mountainsides, and the winds in the valley below begin to rise. At some point, the winds reach gale force. “Solar radiation causes incredibly strong wind systems to develop, up to wind force 8, which equals 43 miles per hour,” says glider pilot Jona Keimer. At certain times, squalls and turbulence make it impossible to take off or land.

But Keimer and co-pilot René Heise surf unperturbed above the chaos that reigns on the valley floor below. An air wave carries them along at an altitude of several hundred feet, ever deeper into the highest mountain range on earth. Behind them a nearly identical plane glides along in their wake.

The power glider pilots are carrying out a mission that could quite literally change our view of the world. Because the mountains are higher, the valleys cut deeper into the earth and rock faces slope down much more steeply than previously thought. The world that Keimer and Heise are mapping is different from the one we thought we knew.

They measure the highest mountains on our planet with a level of precision that wasn't technologically possible before. The quality of their pictures exceeds that of a satellite image. Both planes fly extremely close to the mountain range rock face, and the pictures taken will later become the basis for a 3-D model — the Himalayas in miniature. The idea behind this 3-D model is that it will make it easier to predict natural disasters such as landslides and avalanches — in short, it will save human lives.

Keimer and Heise glide along like swallows, following the route of the Kali Gandaki River. The flight to the source of the Kali Gandaki began shortly after sunrise in the central city of Pokhara, Nepal’s second-largest city. Pokhara was the base from which the team operated last winter, flying north to the Annapurna massif or east to Mount Everest, always keeping close to the main mountain range. 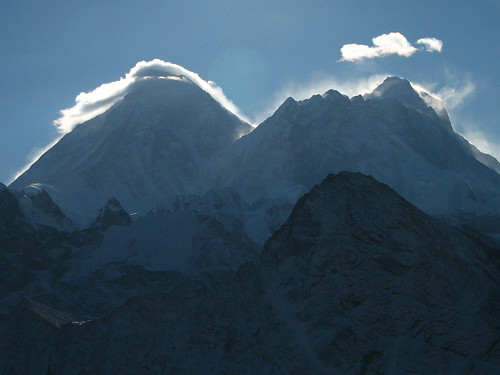 The Himalayas form a perfect playground for airwave research: Fourteen mountains exceeding 26,200 feet and a phalanx of only marginally lower summits line up to form a solid wall to block Southeast Asian monsoons.

The project “Mountain Wave” was created to research so-called lee waves. It's the brainchild of researchers René Heise and Klaus Ohlmann and meteorologist Joerg Hacker. Lee waves are created when winds meet an obstacle such as a mountain range. On the wind-facing side, the wind crashes onto the side of the mountain and flows over the summit. Lee waves are created as the wind flows down the other side: As it shoots down the windward side, the wind begins to whirl, causing eddy currents. Oscillations in the air form lee waves.

Just like ocean waves, lee waves break quite quickly. But their breaking is not easy to predict and often occurs at the height where modern commercial aircrafts travel. “This can cause turbulence, which in turn creates critical difficulties, making it hard to control the airplane,” explains Heise, the project manager and a meteorologist and full-time field-grade officer in the German Air Force. The results of his research will be included in turbulence prediction techniques, to provide safer and steadier flights.

Germany's national aeronautics and space research center, which initiated the Himalaya project, provided the high-tech camera system with which the motor gliders are equipped. The pictures, taken in a small grids along the mountain range with incredibly high resolution, are then reconstituted to form a 3-D model of the valleys and mountains with an accuracy that has never been reached before. It may even settle the question of the height of Mount Everest, which has been contested since its first surveying in 1856. It is currently estimated to be between 29,028 and 29,035 feet, a difference of only seven feet. But the results of the research flights has settled its height somewhere in the middle, at 29,032 feet.

But mountain heights are actually of little interest to the researchers. The Himalayas project is is intended to supply Nepalese geologists and authorities with improved means to protect the public from rock slides, landslides and avalanches.

Improved protection is absolutely vital as evidenced by the events of May 5, 2012. A gigantic rock slide from the face of the 24,688-feet Annapurna IV made its way into the valley and into Seti River, causing a chain of tidal waves that killed 72 people. Even 50 kilometers further downstream, in Pokhara, boulders and uprooted trees were washed ashore. 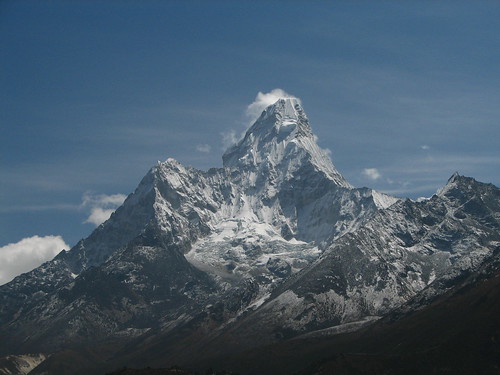 Precise models of the terrain could have never been achieved through satellite imagery alone, as that technology is not as accurate as the photographs. Despite the masses of satellites available, the views of earth from an angle and can't accurately reflect height, says engineer Joerg Brauchle. The MACS (Modular Aerial Camera Systems) cameras attached to the airplane are able to provide exact digital information despite difficult flying conditions and having to be careful not to cross the Chinese border at Mount Everest.

But the sheer volume of successfully collected data accrued in difficult conditions hasn't delighted everyone. The pictures taken cold cannot simply be converted into a 3-D model. The computer scientist analyzing the data has to arrange the pictures in a specific way before developing a consistent model, a process that is still ongoing.

When all data has been calibrated, engineers will be able to develop exact terrain models of some of the most beautiful valleys and mountains of Nepal as well as for parts of the capital Katmandu. The data will also be compared to information from Nepalese glaciologists to reassess the MACS method. If the model correlates with reality, other parts of the world will be measured in the same way, providing the most accurate picture of earth to date.

Last year, the Nepalese government outlawed the chhaupadi tradition that bans certain activities on menstruating women. But little has changed.

Can Nepal' War Victims Ever Get Justice?