Flaws And All, The World Will Miss Barack Obama

President Obama was, on many levels, a major disappointment. But his legacy is one of grace and integrity in a political world that grows uglier by the day.

BERLIN — We will miss him dearly.

Barack Obama will have come full circle on his next visit to Germany in November, this time coming at the very end of his second and final term in office. His first visit to Germany in August of 2008 did, after all, mark the beginning of "Obamania" around the world, this boundless euphoria that was ignited by the man onto whom we had pinned our hopes — even we Germans — even before he was elected for the first time.

His upcoming visit will, once more, feature little more than symbolism, just like eight years ago for his stirring speech in front of the Siegessäule victory column in Berlin, where he made the case for the moral and political renewal of the U.S. and the West. It will be even more symbolic — only this time because he will no longer wield any political power, even as we will know who will succeed him.

But in Obama's case, symbolism is not a trivial matter. If there is one thing that he managed to preserve in his eight years of an exhausting and politically rather unsuccessful tenure, it is his ability to rhetorically lift political issues up into the sphere of morally philosophical abstraction.

He recently demonstrated this dichotomy when he delivered a eulogy at the funeral of former Israeli President Shimon Peres. By elevating Peres to the realms of the role model in the efforts to build peace between Israelis and Palestinians, he managed to, indirectly, portray current Prime Minister Benjamin Netanyahu as a war-hungry saboteur of Peres' legacy.

Just for a moment, Obama's rhetoric brilliance let us forget that he had actually failed across the board with his high-flying plans for an Israeli-Palestinian peace.

President Obama, in general, did not even come close to fulfilling his ambitious objectives. In fact, the world is actually further removed from achieving these goals than when Obama highlighted these problems. 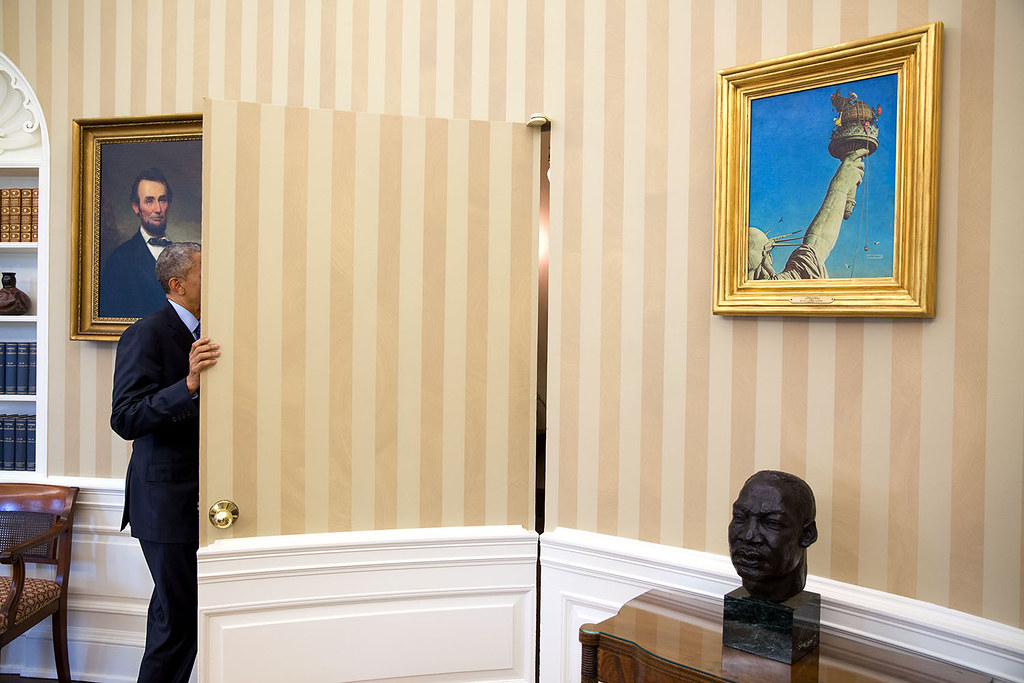 Leading from behind — Photo: White House

Nuclear disarmament is one example of this. In spite of the controversial nuclear deal with Iran, Tehran is allowed to drive forward conventional armament and intensify its military aggression on Syria.

Obama had offered Russia a "new beginning" of a cooperative relationship but Vladimir Putin exploited the president's credulity to position himself as the main hostile global political opponent of the U.S.

The Middle East in particular demonstrates how Obama's redefinition of the role of the U.S. "leading from behind" created a global political vacuum, which is being increasingly filled with destructive powers.

This helps explain why Obama is less proud of what he has achieved than of what he failed to do — namely embroil the U.S. in another armed conflict. He has stated that he feels satisfied to have refused raiding Assad's troops to curtail his military expansion, against the suggestions of the Washington establishment. But it was this decision that actually escalated the rate of killings in Syria.

And yet, despite these catastrophic developments, Obama still point-blank refuses to accept the basic rule that violent, authoritarian powers cannot be forced into accepting compromises through coercion and believable threats.

His belief that an appeal to common sense and reconciliation of interests will, in the long run, be more successful than hostile confrontation, marks him as a hardened idealist.

But this also stands in stark contrast to his apparent cold sense of "realism," as seen when he told The Atlantic's Jeffrey Goldberg that defending the Ukraine against Russian aggression was not one of the "core interests" of the U.S.

Instead, it was the great and noble goals of humankind, such as saving the planet from climate change, that took priority over championing individual nations aspiring to the values of Western democracy.

Success on domestic affairs level is also pretty thin on the ground. The only policy achievement that stands out is his health care reform, although it is not clear if even that will survive in its current form.

If you were to look for a case of an American president in whom the chasm between the glamorous appeal as an individual leader and their actual, palpable political success, one can only think of John F. Kennedy.

While the Western world adored the young and charismatic president, JFK failed in the Cuban invasion at the Bay of Pigs and laid the foundations for the disastrous military involvement of U.S. troops in Vietnam.

Kennedy also hesitated to act decisively in the biggest issues of his time on the home front, namely the eradication of racial discrimination. As for JFK's successor, Lyndon Johnson, his rather successful domestic record was instead overshadowed by the Vietnam War.

Kennedy's rise to mythical status for posterity was of course also helped along by the fact that he was assassinated rather early in his term. The Obama aura has survived the entirety of two rather sobering terms and could, in future, reveal its true potential.

Even diehard Obama opponents will very soon come to dearly miss his presence at the helm of the most powerful nation in the world. This is due less to the content of his policies than to the noble attitude he has displayed with such superior ease.

Obama not only emanates a cool kind of confidence, but also integrity, honesty as well as fairness and humanity. His political career has not been blighted by any scandals or affairs, he was never found to have lied openly or embezzled funds, he never sought gain by belittling or directing personal insults at his political opponents. 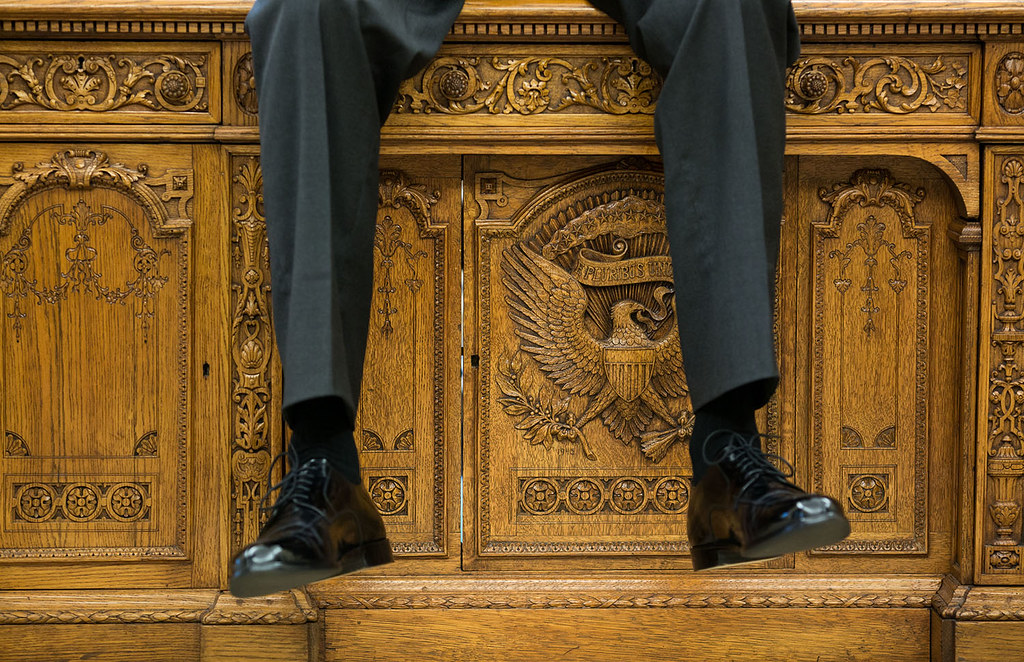 He lived the basic bourgeois virtues and relaxed self-evident modernity which was expressed in his stylishly genteel appearances and aesthetically demanding civility. This almost fairy-tale-like political career seems to belong to a different age, especially in light of the mud-slinging contest his successors have engaged in, and the more general debasement of political and social manners.

In the months and years after his retirement, we might even begin to ask ourselves if this, his era, was indeed real or just a dream.

But this is also evidence that Obama's pathos, orientated towards unity and reconciliation, was unable to stop the disintegration of political and societal institutions or the increasingly dangerous polarization of American society. And this goes beyond the fact that the presidency of a black man, inevitably perhaps, reanimated latent racial prejudice.

It is only now that reality is finally showing its ugly face, while the same face was hidden from us to some degree, bathed in the soft light of beauty that Obama brought to his nation.

In the end, Barack Obama was probably always more of an inspiration than a politician. In some ways you may even call him an anti-politician. But it is a simple truth that the human race, from time to time, needs the embodiment of hope to believe that the world can become a better place. That decency and honesty can be found at the very top of politics.

PARIS — Grandioso, say the Italians. Kolossalt for the Swedes. The Berkeley student newspaper called it monumental, while a Buenos Aires daily was stamping it patrimonio de la ...

Slovenian-born writer Andrej Mrevlje tries once again to get a read on the fiercely reserved first lady, this time with the help of new book called The Art of Her Deal.