CHARLIE HEBDO
Charlie Hebdo is a French satirical magazine famous for its controversial cartoons, including caricatures of the Islamic Prophet Muhammad. Founded in 1970 under the name Hara-Kiri, Charlie Hebdo became known worldwide after some of its historic journalists were killed in a terrorist attack on January 7, 2015
Ideas

Charlie Hebdo is facing another existential moment — and Harvey Weinstein is partly responsible. The surviving members of the French satirical weekly might appreciate the twisted irony. Less than three years after the terror attack that killed 12 members of its staff, Charlie has been receiving very explicit death threats after a cartoon they published on their cover last week took ribald aim at a prominent Islamist scholar. Le Monde reports Tuesday that among the messages delivered across social media the past few days: "We're gonna cut your throats," "Second round coming up for Charlie," and "If nobody decides to go, I'll go myself …"

Both long before, and ever since the Jan. 7, 2015 attack, Charlie Hebdo has received such threats. But in an interview published Tuesday in Le Figaro, the magazine's editor-in-chief Laurent "Riss' Sourisseau notes that "for this cover, the number is higher than usual." The Paris prosecutor's office opened an investigation Monday.

So what's the spark for such virulence? Another depiction of Islamic prophet Mohammed? Er, hardly. In its edition last Wednesday, Charlie Hebdo depicted the Swiss-born scholar Tariq Ramadan with a huge erection (perhaps an ode of sorts to an old drawing of disgraced former IMF chief Dominique Strauss-Kahn) saying, "I am the sixth pillar of Islam!" under the caption: "Rape: Tariq Ramadan's defense."

In the wake of the Harvey Weinstein scandal, Ramadan has been accused in France of rape by two women, while in Switzerland, the daily La Tribune de Genève reported new allegations that he sexually harassed at least four former underage students, sometimes coercing them into having sexual intercourse with him. The 55-year-old has vigorously denied the accusations as a "campaign of lies launched by my adversaries."

Also a professor at the University of Oxford, Ramadan is a controversial figure in France, where he's perceived by critics across the political spectrum as a representative for conservative Islam and soft Islamism. His grandfather, Hassan al-Banna was the founder of the Muslim Brotherhood in Egypt and his father, Said Ramadan played a prominent role in the organization there until he was exiled by then president Nasser, and fled to Switzerland — where Tariq was born. His brother, Hani Ramadan, is banned from entering French territory and openly defended the use of stoning against women.

An attack against Islam? In fact, against Ramadan.

The stakes in this particular sexual assault controversy, in other words, are high. But does this make Charlie Hebdo"s drawing an attack against Islam? Was its no less perverse cover of Weinstein two weeks ago an attack against movies? Hardly, again.

Laurent Joffrin, editor-in-chief at Libération, the French daily that housed the satirical newspaper's staff after the 2015 attack, summed it up in an editorial Monday: "An attack against Islam? In fact, against Ramadan, mocked as a Tartuffe with a big d***, who contradicts the very principles he is supposed to teach, and which are not, as it happens, targeted by Charlie. But subtlety is not the bigots' strongest suit ..." 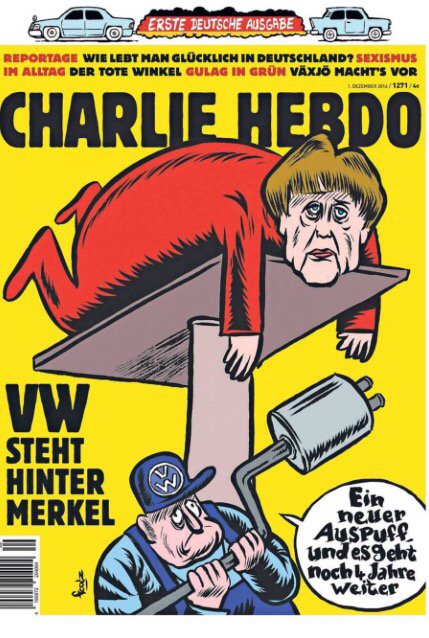 Angela Merkel — and well, just about everyone else in Germany — better brace themselves. French satirical magazine Charlie Hebdo launched a German version Thursday, the first version of the often cheeky, sometimes offensive weekly, in another language and country. The new version comes nearly two years after a jihadist attack at the Charlie Hebdo office in Paris that killed 12.

The cover of the inaugural German issue shows Merkel lying on her stomach on a car mechanic's hydraulic lift. "With a new exhaust, she'll be good to go another four years," quips the mechanic. The cover also asserts that Volkswagen, the German carmaker hit by an emissions cheating scandal last year, "stands behind Merkel."

If that isn't offensive enough, the initial 16-page edition was preceded by a publicity poster that featured Merkel sitting on the toilet reading a copy of the magazine. With a print run of 200,000, the first issue was for the most part greeted warmly by German media.

"Fiscal Terrorism," the front page of this week's satirical French weekly Charlie Hebdo reads in the wake of the Panama Papers leak, which implicates heads of state and other wealthy notables in a global money laundering and tax avoidance scandal.

"One year later, the assassin is still on the run," this week's special edition of French satirical weekly Charlie Hebdo reads, as it depicts a fugitive, bloodstained God figure carrying a Kalashnikov.

The special edition marks the Jan. 7 anniversary of the deadly terror attack on Charlie Hebdo"s newsroom in Paris. Al-Qaeda's branch in Yemen claimed last year's horrific murders of eight staff members at the hands of two gunmen, saying it was retaliation for the publication of caricatures depicting the Prophet Mohammed.

"They've got the guns. Screw them, we've got the Champagne!" reads Charlie Hebdo"s much-awaited cover four days after the latest terrorist attacks that killed at least 129 people in Paris on Nov. 13.

The ever-provocative satirical weekly was targeted in the last round of Islamist attacks in Paris, when 12 people were killed at the newspaper's office on January 7.