Whiff Of Australian Smoke In South America, World On The Brink

From the apocalyptic Australian fires to the killer drone strike on Iran's top military commander, these are troubling times indeed.

BOGOTÁ — People suddenly smell smoke, which isn't unusual in Chile. Only this time around it's not coming from anywhere nearby. The haze isn't from one of those fires that blaze from time to time in the hills around Valparaíso and Santiago, but from far-off Australia, from a conflagration so immense it's darkening skies on the other side of the planet.

Mother Earth is in flames, a young girl from a northern land has been telling us for months. We're reminded of that again by an inferno in one of the world's great historical monuments. The two most searched subjects on the worldwide web in 2019 were the fire of the Notre Dame cathedral and Greta Thunberg's environmental campaign. Time magazine named her Person of the Year, to the abominable Donald Trump's frivolous indignation.

At his golf club in Mar-a-Lago, Florida, Trump wasn't thinking of the Australian fires but rather the killer drones that his chiefs of staff had decided to unleash on Qasem Soleimani, Iran's most powerful soldier, and start the new year sowing even more apocalyptic seeds.

There are still forests but we are living dangerously on this planet.

As the Americans devised their murderous strike, drones — some 2,000 of them — also flew high above Shanghai Bay. They welcomed the arrival of 2020 by forming the pattern of a man, a dragon, a sphere, and the auspicious Chinese characters Zhui meng, which means 'chasing dreams.' Drones for killing, drones for dreaming. The lights in the New Year sky remind us that everything we invent can serve beauty or horror.

Human madness contrasts with nature's order and its fidelity to its laws, with the efforts of the birds and bees to fulfill ancient cycles and the dutiful trees that do so much to carry out the indispensable work of supporting life in the world. Nature, as the poet Jorge Guillén said, remains "the enormous peace that gives refuge to war." 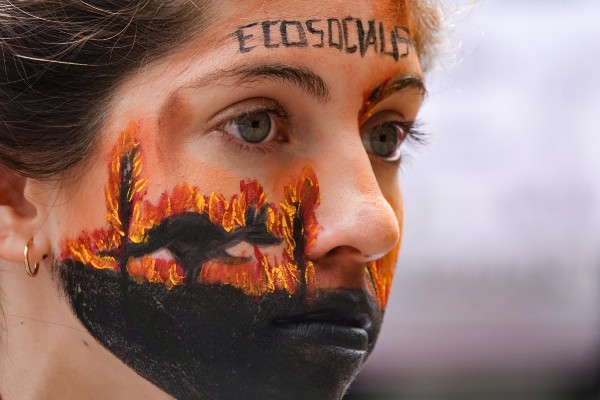 There are still forests, we tell ourselves. Still rivers, and snow on the mountains, and fish in the water. Still, pigeon chicks in nests and puppies playing in prairies, and every flower retains its habitual color. Everything is in its place. But we only need divert our gaze from nature and its habits a little to recall we are living dangerously on this planet.

Because we all know what caused the Australian fires, and the ones that rage in the forests of Portugal, Italy and California in summer. We can put a face to them today: It is the face of all those who deny that we are irreparably altering the planet's climate.

More brazen and destructive every year, the fires bear the face of the hotel magnate chosen to run a country so vigorous in fanning climate change, a phenomenon he vehemently dies against overwhelming visible evidence. There are powers in this world, it appears, that can pay a ruler to negate history's gravest evidence.

Iran responded to the assassination of Soleimani with its own strikes — on a military base in Iraq, but without killing anyone. Either way, a martial wind is sweeping the world as fast as the smoke Australia is sending across the Pacific.

Our leaders don't know how to stop.

This time of ours, with our fascination for spectacles, our eagerness for fun and distraction, is all too reminiscent of the Belle Époque, at the outset of the 20th century. A period that deemed itself the essence of civilization, even as it nurtured the embryo of an explosive war. There are also parallels to the 1930s when people thought the war was a thing of the past. Inebriating themselves in Paris and Berlin, people looked away as the Rights rearmed, and the Left rose up, and factories pumped out munitions — all in blind preparation for the madness that would soon engulf them all.

Instead of helping the needy and fighting the monstrous inequality that causes so much conflict and migration, it might again occur to someone that the real problem is that there are too many of us and that the solution is to abandon the world to the immense arsenals which armies are again amassing.

There is unease across the world. The result could either be the destruction of the world by a society of waste and ostentation, and exacerbated climate change, floods and pandemics, or a renewed consciousness that will impose new spiritual and ethical paradigms on dazed humanity.

We talk so much about our rulers. We shower them with attention and entrust in them our hopes. But the only thing we know is that if there are changes, they will come from citizen bodies, not the great powers. Because our leaders don't know how to stop. They can't see beyond their utilitarian horizons or contemplate a future beyond their immediate calculations.

Something with more perspective, a more distant light or a brighter star must help humanity invent a more generous mode, more grateful and austere, and a more fitting way to inhabit this world.

*William Ospina is a Colombian novelist and poet.