War Or Peace In Ukraine? It's All About Europe

The risk is real of armed conflict between the West and Moscow on European soil. Searching for a way out means learning the lessons of Finland, and counting on leadership from France.

We don't even know if the main parties in this apparently domestic conflict are still acting freely or have been reduced to playing the part of mercenaries in a proxy war whose objectives elude them. Left to their own devices, they are unable to end this civil war.

Yet prolonged fighting doesn't serve the interests of the two sides' "patrons," either in the West or the East. Beyond pictures of people suffering and of destruction in the middle of Europe, the Ukrainian crisis is starting to provoke dissension inside the European Union. It is also disrupting an otherwise more united international agenda focused on other priorities such as fighting Salafist violence, which requires effective Western and Russian cooperation.

Even if Russia is not ready to abandon the separatists, it has an interest in finding a dignified exit from the conflict. It can't pay for it indefinitely. The domestic image of Russian President Vladimir Putin as the warlord winning on all fronts is unsustainable. All sides would benefit from a way out of the quagmire. But for that, the storm of war needs to be quieted by neutralizing the extremists fabricated by and for this conflict.

The U.S. Congress has already called on President Barack Obama to supply Kiev with offensive weaponry. Several experts and neoconservative ideologues recently repeated these calls in a report that concluded that Ukraine's regime must receive military backing. Some EU leaders, notably the Baltic states, are saying similar things today.

NATO chiefs have just announced that the alliance would build new military bases in member states of the hypothetical "eastern front," while NATO is announcing joint maneuvers with Georgian troops in the Caucasus.

The so-called hawks in Russia are engaged in their own game of threatening gesticulation. In response to possible Western military aid, numerous members of the country's legislative body, the Duma, have proposed making Russian military involvement in Ukraine official. Other Moscow "hotheads," hoping to make a correct guess of their Russian master's real intentions, are saying Russian troops must march on Kiev. It seems the noise of restless jackboots is drowning out isolated calls for reason.

While the parties have not yet passed the point of no return, we might do well to reflect a moment. Who would benefit from an escalation of violence? Clearly among the first beneficiaries is the war party in Kiev, which sees only a military solution to the problem of rebellion in the country's eastern regions. For Moscow, Western military aid would certainly give Putin more evidence for his charge that the Kiev regime is NATO's "foreign legion."

From a domestic viewpoint in Russia, NATO's direct military involvement in an internecine fight among Slavs would fuel a new nationalist wave that would practically snuff out what's left of Russia's pro-European forces and the democratic opposition to Putin's rule.

But doing nothing doesn't seem at all like a solution for the West. It seems that a middle way — a compromise that would consider all the warring parties' interests and concerns — has yet to be properly explored. It's time for Old Europe to return to center stage.

It's not as if the outlines of such a compromise are a mystery. The first step would be to remove mutual suspicions that lead to misunderstandings. On the European side, Russia must be assured that there is no Western project to turn Ukraine into a strategic bridgehead for NATO, to be used in any plans for regime change in Russia. It's a scenario some U.S. policy thinkers envision. 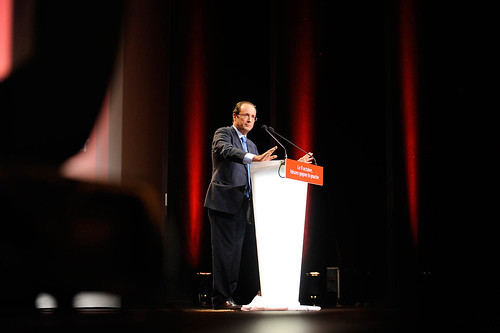 The Russian side would have a similar duty to clarify to its Western neighbors the limits of its strategic "concerns." It would need to reassure them that it has no plans for repeated political banditry after the Crimea scenario.

On those bases, it should be relatively feasible to reach a formula for settlement: confirming Ukraine's territorial integrity with international guarantees; creating institutional reforms in Ukraine to assure the autonomy of Russian-speaking regions; confirmation of a non-aligned status for Ukraine (or at the very least, leaving this and the issue of the Crimea's legal status to the judgment of future political generations).

The issue is ultimately in the "the two Fs" — the federalization and Finlandization of Ukraine. This clearly has seemed the sensible option for some time. And we could add another F: France. This could be an opportunity for the country to recover its rightful place at the center of European diplomacy.

It is a compromise, but it merits attention. Otherwise, we may soon face the kind of "leap into the dark," as German politician Theobald von Bethmann-Hollweg put it, that Europe took in August 1914.

In Ukraine, The Zelensky Revolution Crashes Into Reality

The head of state, a political outsider who had promised to fight corruption, must contend with the powerful oligarchs in his own entourage at the risk of disappointing his voters.

We must remember the many lives lost to coronavirus. But we should also not forget the fate of many new lives that have been left up in the air as travel bans and strained health care systems have ...