The Perfect Storm That Could Lead To A Le Pen Presidency

PARIS — Defeated, the government doesn't know what it wants! Defeated, the Socialist Party is again incapable of defining a clear line! Defeated, members of the center-right Republicans party are tearing each other apart as they seek to avoid the "trap" the Socialists are said to have laid for them. The staggering debate ongoing in France over whether to strip terrorists of their French nationality has further eroded public trust in politicians.

Well, not all politicians. One party has shown consistency and could even brag of clear-sightedness for advocating the stripping of nationality for a long time. It will come out of this debate stronger than before just by keeping its mouth shut. That party, of course, is the far-right National Front.

President François Hollande, on the contrary, will be left bruised, even weaker, though the entire Congress applauded him just two months ago when he announced the measure in the aftermath of the Nov. 13 terrorist attacks in Paris. Inside and outside his party, the conventional wisdom is that such a policy would be pointless and wouldn't change the face of terrorism.

This episode increases National Front leader Marine Le Pen's chances ahead of the 2017 presidential election. True, a National Front victory in France's most important election of the year isn't the likeliest outcome, for now. The rise of the nationalist party has been a recurring feature in French politics over the past 30 years, but has so far fallen short.

Jean-Marie Le Pen won 17% of the vote back in 2002, enough to qualify for a runoff against Jacques Chirac. Ten years later, during the last presidential election, his daughter Marine got a little more than that. Her party then climbed to 25% in the European Parliament elections of 2014, and to 27% in the French regional elections late last year. It reached 40% in the first round, in the northern and southeastern regions, but it couldn't rally enough voters to win a majority in the second round.

The National Front is currently able to garner a majority of votes among the working class, but not among the middle class or senior executives, notes Jérôme Fourquet, president of the polling institute Ifop. If a National Front victory in 2017 isn't the likeliest prospect, it should not, however, be ruled out entirely. It's actually not difficult to imagine how it could happen. 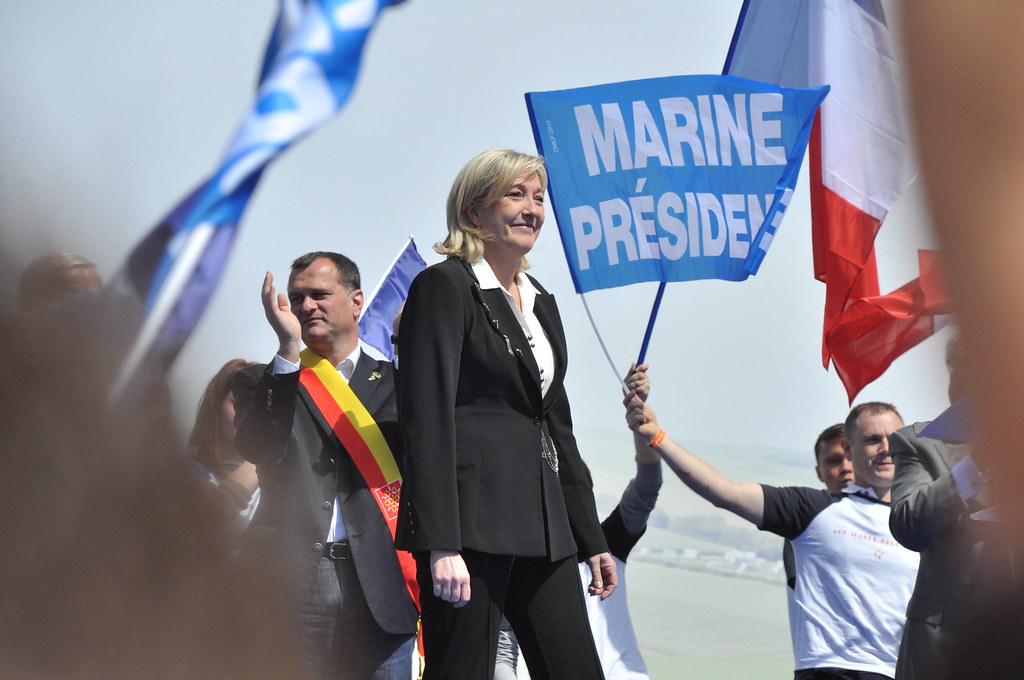 To the left, a new rift between traditionalists and those who are more progressive could undermine François Hollande as he seeks a second mandate. Meanwhile, there could be a major division among the center-right, with a clash of leaders who all believe they have a shot at winning, from former President Nicolas Sarkozy to former Prime Ministers François Fillon and Alain Juppé. In the recently released comic La Présidente, in which authors François Durpaire and Farid Boudjellal imagine what the first nine months of Marine Le Pen's presidency could look like, Sarkozy obtains a very narrow victory in the party's primaries, encouraging some of his rivals to break away from the party and run in the presidential election anyway.

In the meantime, Marine Le Pen could get the unexpected support of intellectuals, left-wing politicians and entrepreneurs, thus boosting her credibility among the public. She could also benefit from two potential crises. The first would be a national security crisis, with more terrorist attacks. The second crisis could be a social one, if unemployment doesn't fall.

Then comes the icing on the cake: The current president and his predecessor, Sarkozy, both of whom see themselves as legitimate candidates, have been the most deeply unpopular presidents in the five-decade history of the Fifth Republic. In a runoff between either of them and Marine Le Pen, Socialist voters would find it more difficult to vote for Sarkozy than they did to vote for Chirac back in 2002. And many Republicans voters would rather stay home than vote for Hollande.

But even if Marine Le Pen won the race, that doesn't mean her party would be running the country. For that, the National Front would need to win the parliamentary elections (which usually take place in the month that follows the presidential election). It's unclear whether her wave of support would be strong enough to help elect a majority of National Front lawmakers, most of whom would be unknown to the public.

Some experts believe that her victory would be such a shock that it would become possible for her to gain a majority in the National Assembly. In their comic, Durpaire and Boudjellal foresee a house split into three even parts, with the farthest-right fringe of the Republicans giving in to the temptation of a coalition government with Le Pen's party.

Another, perhaps likelier, outcome would be a coalition between The Republicans and the Socialists, leading to the national unity government commentators have often dreamed about. Such a coalition would be formidable, finally making the important reforms (on work, the state, pensions, etc.) a majority of the population supports.

On the other hand, we'd have a president lying in ambush, playing either the nuclear weapon of parliamentary dissolution or a waiting game until the next presidential election, in 2022. Over the past 40 years, outgoing presidents have always lost reelection bids, except when they presided over an opposition-led government and parliament. And in such instances (Mitterrand in 1988 and Chirac in 2002), they always won the parliamentary elections that followed.

The insidious path of COVID-19 across the planet is a blunt reminder of how small the world has become. For the coming weeks, Worldcrunch will be delivering daily updates on this crisis from the ...

Debates on the hydroxychloroquine and chloroquine treatments for the COVID-19 have generated conspiracy theories with one recurring question: Why isn't it used more?