The Odd Evolution Of Gustavo Petro, Former Marxist And Mayor Of Bogota

Is this the rise of another Hugo Chavez for Latin America?

BOGOTA — Gustavo Petro, a former Marxist guerrilla who is now the socialist mayor of Bogota, has little apparent interest in following Machiavelli's counsel that ideas be adapted to circumstances. Instead he prefers twisting reality to the demands of his own temperament, and confides more in the mobilizing potential of an initial idea than the hard work involved in giving that idea body and consistency.

Petro is more a politician than a manager, though it should be noted that he is a politician alien to the art of governing. Some see in his conduct the "principles" of a fighter committed to his destiny. Others associate him with the Latin American tradition of the local political chieftain: He might unkindly be described as a pale version of Venezuela's Hugo Chávez. At best, he's a visionary with a disdain for the humdrum continuity of public politics.

While the late Venezuelan leader ordered the confiscation of rich people's properties to house the poor, our mayor wants to create enclaves of the displaced in Bogota's prosperous neighborhoods. He hasn't, however, thought about the resources those the latter would need to ensure a dignified life and fit into those communities.

One wonders if Petro works in a state of trance induced by his own bombastic discourse. "Social stratification in Colombia is a caste system, anti-democratic, anti-republican and inhuman," he says. For all their accuracy, the words have little impact because they are rarely followed by deeds. Projects seem to evaporate as fast as the hasty decisions to pursue them are made.

The attributes that once set Petro apart seem to have dissipated as well. What happened to the great orator who dared, with good reason, to denounce then-President Álvaro Uribe for his alleged ties to paramilitaries? Or the man who took power on the back of a struggle against the corrupt contractor companies robbing the city with the connivance of the last mayor, Samuel Moreno? 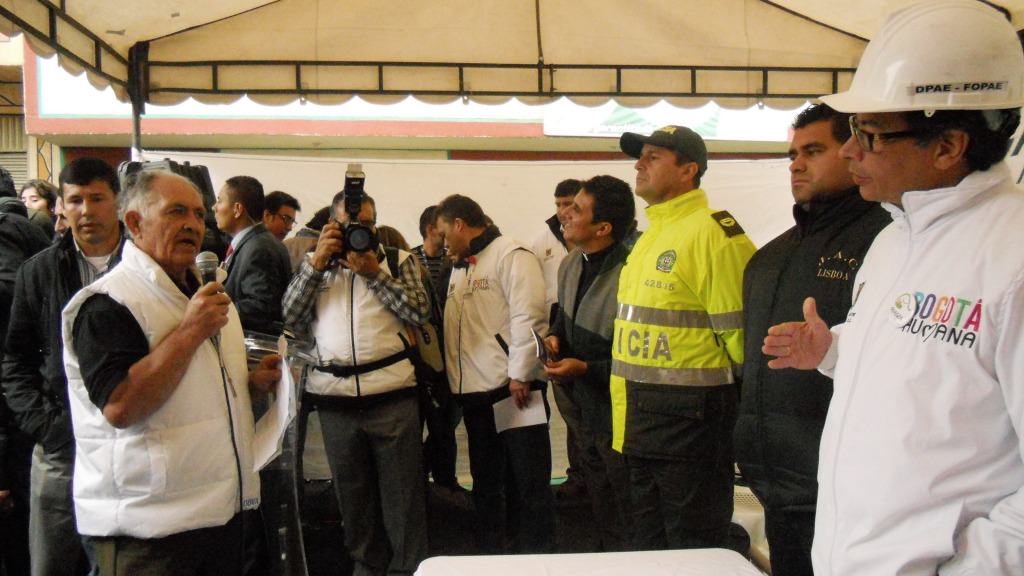 Petro (right) listening to the community in 2013 — Photo: Bogota Humana

Petro was the man who presented himself as an alternative to the political armies of Right and Left, one lot defending its extremist policies against the other's rigid socialism. He came to the Liévano, the mayor's palace, with a new concept of a capital city: He aimed to reduce social segregation, plan its development while caring for the environment, promote the participation of the excluded and have the state recover its prerogatives.

But Petro's is a minority government. The Left, unaffiliated voters and the poor cast the votes that gave him his victory. By now, his managerial mistakes have cost him the support of the city's anti-establishment voters. His tendency to improvise, his verbal inconsistencies and the continuous negligence that have characterized his administration have hidden the achievements that proved to be, for the poor and oppressed, gifts from heaven: free water, transport subsidies, advances in health care and education.

All of that created a credibility crisis that was complemented by the hostility of the press and municipal council. But then, a year ago, Petro suddenly received his own gift from heaven: his ousted at the hands of his political "nemesis," Alejandro Ordoñez, the arch-conservative inspector general of Colombia. What a blessing! Petro turned that crisis into a point of political turning point and ultimately resolved it in his own favor.

The inspector general's crass assault became a providential opportunity to start championing "the people." With hardly any city employees among them, thousands of Bogota "sans-culottes" filled the historic Bolívar square to cheer their leader as he waved from the palace balcony. Petro seemed to be emulating earlier popular leaders of Bogota's tumultuous 20th century history. That's his style. His dismissal prompted him to launch a verbal bombardment against the oligarchy, which cost him support from the middle and upper classes. Eventually he got his job back. Only now, his only backing comes from the poor.

Petro has come to swap the cross-class, inclusive option for the more challenging cause of the disinherited. And he has changed his discourse. He used to talk about breaking the social apartheid in a broad central swath of the city. Now he's using the wealth-divid to make an ugly spectacle. The target of his divisive talk is the wealthy northern section of Bogota.

His affirmative, headstrong brand of socialism is seductive to those who feel left out. But it also serves to fuel the Right's strident opposition. In addition, it has caused a divorce with the orthodox Left, which now perceives him as a heretic. With his inclination for forceful ideas — and their noisy impact — and an excessive self-confidence, Petro may find it hard to shake off his aura of an antihero of modern times.

The Pandemic As A Welcome Lesson In Humility

The coronavirus crisis has been stressful and tedious. But it's also a reminder that we can't have everything we want, when we want it. And that, in many ways, is a good thing.