The President's former lawyer pleads guilty on the same day his former campaign chairman is convicted of financial crimes. The hand of special counsel Robert S. Mueller is significantly strengthened. What happens now?

WASHINGTON — No day during President Donald Trump's 19 months in office could prove as dangerous or debilitating as Tuesday. Everything that happened in a pair of courtrooms hundreds of miles apart strengthened the hand of special counsel Robert Mueller III and weakened that of the president of the United States.

This was a day when truth overran tweets, when facts overwhelmed bald assertions. Presidential tweets, however provocative, eventually disappear into the ether. Tuesday's convictions could send two people who have had close relationships with Trump to prison for several years, while one of them brought the investigation to the doorstep of the White House.

What took place Tuesday will ratchet up the pressure on the president, will embolden his critics, and will no doubt inflame and rally his supporters. If the past months have seemed increasingly hot, the coming months could be hotter still - there's little doubt that the Trump presidency has now entered more treacherous territory, and no one can know where it will end.

This was a day when truth overran tweets.

Trump has tried everything to discredit Mueller's now wide-ranging investigation. He has blasted it as a witch hunt, called special counsel's team thugs, sought to make the operation into a purely partisan exercise. He has complained that Mueller has strayed far from his original mandate to investigate Russian interference in the 2016 presidential election. This month, the attacks escalated from volleys into a barrage, often multiple times a day.

On Tuesday, legal actions dropped with resounding force as a counter. By far the bigger blow for the president came in New York, where Michael Cohen, Trump's longtime former lawyer and fixer, pleaded guilty to tax fraud and campaign finance violations, including trying to buy the silence of two women whose stories he feared could influence the 2016 election.

In making that plea, Cohen implicated Trump in the campaign finance violation, saying he acted at the direction of a federal candidate - namely Trump. What evidence exists to corroborate Cohen's statement will await future legal developments and the public relations war that will intensify. 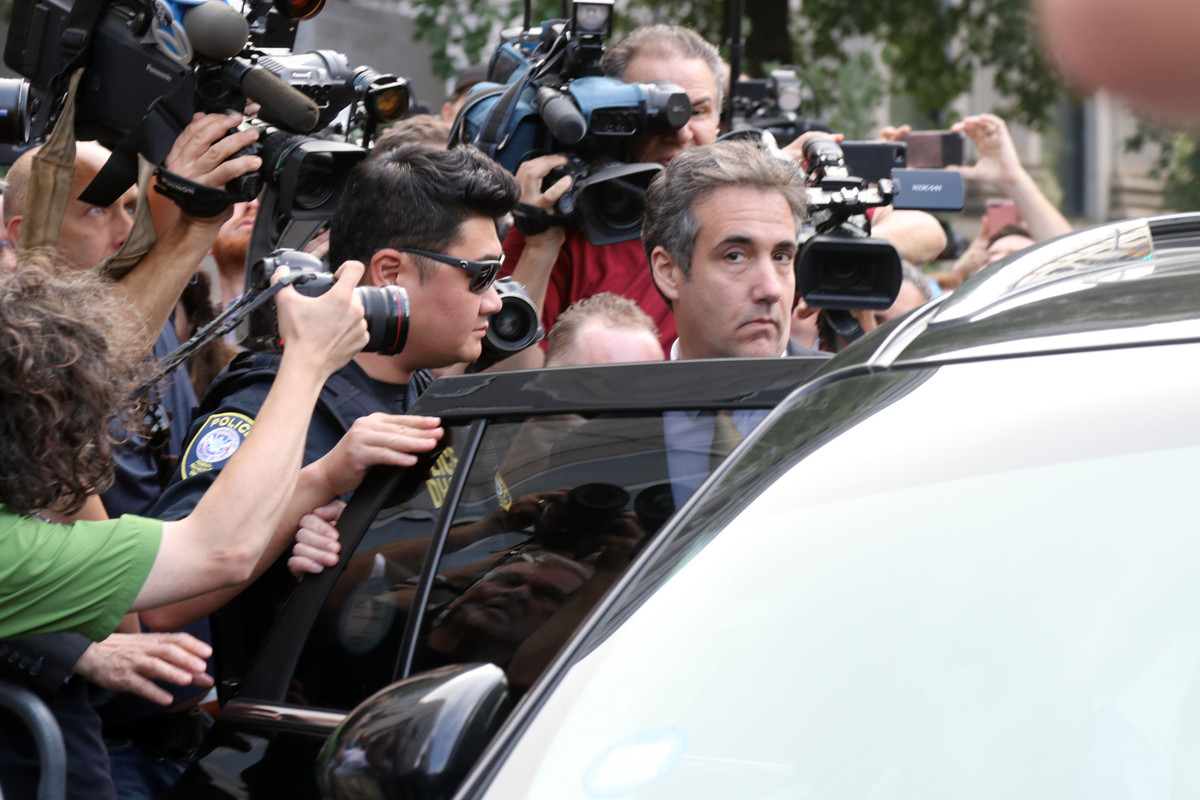 In Virginia, Paul Manafort, the president's onetime campaign chairman, was convicted on eight counts of tax evasion and bank fraud. A mistrial was declared on 10 other counts. None of the criminal activity related to Trump's 2016 campaign, but the convictions robbed the president and his team of any hope that the jury in Virginia would deliver a setback to Mueller's team. Instead, it did the opposite.

Tuesday's legal thunderclaps laid bare the vulnerability now facing the president. He and his lawyer, former New York mayor Rudy Giuliani, have waged a relentless public relations war against Mueller, while fencing over whether the president would agree to speak with Mueller's prosecutors about his knowledge of the events under investigation.

Giuliani has been no help to the president. Either by ignorance or design, he has tried so many lines of attack against the Mueller team that he has ended up contradicting himself, misstating the facts and been forced to explain away statements such as the one he made Sunday on NBC's "Meet the Press" that "truth is not truth." Mueller's team has continued its methodical pursuit of what constitutes that truth to the best of anyone's ability to find it.

The attacks against Cohen came after a public embrace by the president and others. That embrace, of course, came before it was clear that Cohen, who once said he would take a bullet for Trump, began to cooperate with prosecutors in the Southern District of New York, after they scooped up a mountain of his documents and began to make clear just how many years in prison he could face for tax fraud and other violations.

Since then, Giuliani has been even more relentless in attempting to discredit Cohen, calling him a liar and much worse, in television appearances that proved to be no substitute for serious lawyering and a stout legal defense.

Cohen's stunning plea deal reset the table, and not in a way that the president can easily explain away. From claiming not to know about Cohen's payments to buy the silence of women who have alleged affairs with Trump to acknowledging that the president repaid Cohen for those payments, the story now has put Trump at the center of the decisions to do so, and in what prosecutors say is a violation of campaign finance laws.

Cohen's stunning plea deal reset the table, and not in a way that the president can easily explain away.

The president's first reaction to Tuesday's events came late in the afternoon, as he was arriving in West Virginia for a campaign-style rally. He called Manafort a good man, expressed disappointment that his former campaign chairman had been swept up in the Mueller investigation, and repeated his assertion that Mueller and his team are engaged in a witch hunt. "No collusion," he said again.

As for Cohen, he said nothing, an omission that blared out more loudly than his defense of Manafort and his denunciation of Mueller's work. Giuliani issued a statement asserting that there was no allegation of wrongdoing by the president in the charges against Cohen, a narrow reading of what took place in the courtroom in New York.

The Cohen conviction dealt another blow to the credibility of a president who frequently says whatever he wants, regardless of its accuracy, to advance his interests. But this one could have far greater implications than some of the president's other false claims. Prosecutors will decide how far to pursue this. Politicians will be asked what, if anything, they should do as well.

The Manafort conviction adds another layer to the mounting evidence that Trump has not, as he claimed, surrounded himself with "the best people." His White House has been a personnel shambles, with comings and goings at a record pace and with some far from the quality the president claimed.

His first national security adviser, Michael Flynn, has pleaded guilty to lying to the FBI. Others have left in disgrace for their misdeeds. Meanwhile, Omarosa Manigault Newman, who was dismissed from the White House months ago, has been airing embarrassing audiotapes as she promotes a tell-all of her days as a White House staffer. Her credibility is minimal. That she was hired at all is the real concern.

On Tuesday, as the legal news was breaking, The Washington Post's Robert Costa reported that White House economic adviser Larry Kudlow hosted Peter Brimelow, the publisher of a website that promotes white nationalism, at a party at his home last weekend. This came after a White House speechwriter was let go for having appeared with Brimelow in 2016.

That speaks to the culture that has been created. Tuesday's developments speak even louder. They are concrete but not definitive. The president is dug in, feeling aggrieved by an investigation he believes was corrupted from the start, and he has gone off the rails since it fell into Mueller's hands. He has options, including attempting to shut down the inquiry, although he has been warned repeatedly of the consequences of doing so.

Mueller will continue to move forward, at a pace of his own choosing. Justice Department guidelines probably will inhibit him from doing anything dramatic in the early fall, ahead of the midterm elections. Whether more shoes will drop before Labor Day, only he knows. One way or another, the president faces many more months of uncertainty.