Inside Iran, Biden's Election Is Cause For Both Hope And Fear

During an anti US demonstration in Tehran, Iran in January 2020 - Rouzbeh Fouladi/ZUMA

Donald Trump's departure renews the possibility of talks between Washington and Tehran. But the Iranian leadership has reasons to be wary of the incoming administration in Washington.

How does Iran feel about Joe Biden's victory in the recent U.S. presidential election? Depends on when you ask.

On Nov. 3, the day of the election, Foreign Minister Javad Zarif told the American broadcaster CBS that Iran sees no difference between the sitting president of the United States, Donald Trump, and his Democrat rival. But just three days later, speaking to Venezuela's TeleSUR, the Islamic Republic's top diplomat told a different story: there's "clearly" a difference between the two, he said.

The shift may indicate divided opinions inside the Iranian state on the subject of talking to the Biden administration.

Iranian officials and media are acting as if Biden's election is a certainty, in spite of Trump's legal challenges. As a result, negotiations with the United States are receiving more serious attention in Tehran, and reformists, among others, will likely up their pressures on Supreme Leader Ali Khamenei and others who oppose to engaging Washington with talks.

In any case, all sides seem to agree that a change of administration may soften Iran's current refusal to negotiate.

President Hassan Rouhani, for his part, has said that the Biden administration would soon have an opportunity to rectify his country's mistakes and resume the path of respect for international norms. And government spokesman Ali Rabii wrote in an item entitled The White House's Occupant in January that "we are not indifferent to potential differences between the two American presidents," and that Washington could resume a "sensible" path.

While Leader Khamenei has reiterated the Islamic Republic's refusal to talk, he clarified in November 2019 that "negotiating with America is useless because they won't make concessions." That could mean that concessions might open the path to talks.

Either way, it's clear that officials and state media are happy to see Trump depart. What remains to be seen, of course, is what policies the new administration will adopt toward the regime, and whether that will open up new opportunities for Tehran.

In the daily Aftab-e Yazd, parliamentarian Jalal Sadatian, the regime's former ambassador in London, cautioned Iran not to confuse Biden with his former boss, Barack Obama. The president-elect, he wrote, is likely to be less flexible with Iran. And so, rather than wait for relief that may not arrive, the Iranian government needs to take it upon itself to improve the country's difficult economic conditions, Sadatian argued.

The lawmaker went on to say that officials shouldn't wait until January. "By then we will have lost an important opportunity," Sadatian wrote. "Iran must clarify its plan before Biden's team is formed, so it can win suitable concessions in future talks."

His words may be directed at the Supreme Leader, as the man who must decide on talks.

Trump's unilateral sanctions policy has proved costly to the regime. And while Biden has mentioned reviving the 2015 Nuclear Pact that Obama helped broker, questions remain: Who in Iran will become his interlocutors? Will the regime allow the Rowhani-Zarif team to repeat the pact, in spite of its failure? Or is Khamenei waiting for a "revolutionary" administration after Iranian presidential elections scheduled for 2021?

Talks may heighten divisions within the regime.

Talks with America may heighten divisions within the regime, especially if a military or militaristic administration takes office in Tehran. It seems unlikely, however, that talks will make much progress if hardliners win the presidency and Biden insists on a nuclear deal that curbs Iranian ballistic activities.

Outside Iran, some regime opponents consider Biden an opportunity.

Activist Nima Rashedan told the broadcaster Radio Farda that even if Trump had won the votes, he wasn't likely to change his policy toward Iran and/or form a direct front against Iran. Rashedan believes that Trump wanted a better deal than the nuclear pact, and had no ideological posture on the need for regime change, as evidenced by the fact that he had significant contact with exiled opponents. 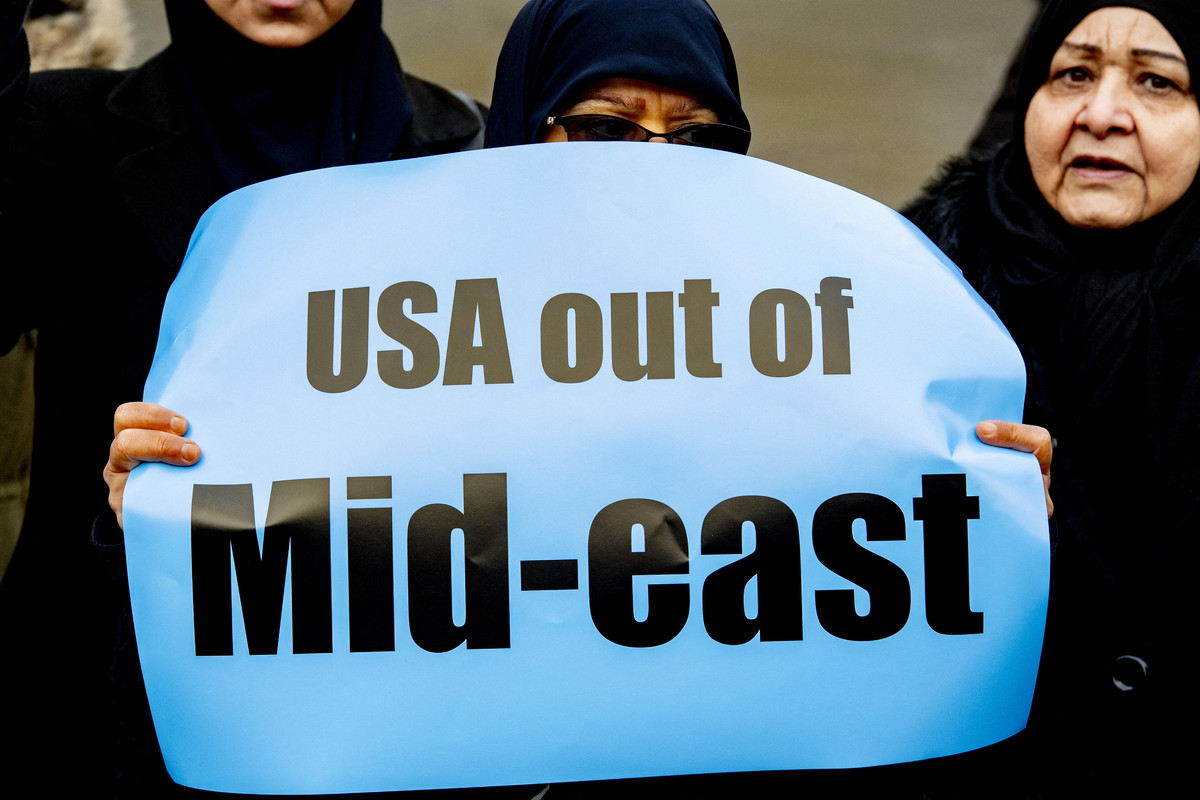 At a demonstration in The Hague against crimes perpetrated in Iraq by the U.S. — Photo: Utrecht Robin/Abaca/ZUMA

Meeting "alternative forces" would be the first step for anyone envisaging regime change, the activist explained. "But Trump did not do this, and in fact, the U.S. State Department boycotted Iran's opposition and merely shifted the Middle East balance of power [against Iran]," he said. Rashedan also said that it's not clear yet whether Biden will emulate Obama or adopt a more "traditional" Democratic approach, "which is much closer to Israel and human rights activists."

Rashedan said Iranian officials are far more suspicious of the Democrats than of Republicans, fearing a bid to replicate in Iran the 1988-89 collapse of the communist states. For that reason "they have repeatedly warned about networks and infiltrations," he explained. "Under Trump, the level of hostility between Iran and America was such that it barred the way to infiltration and network-building."

When Iranian officials mention infiltration, they point to people like the Iranian-American Siamak Namazi, along with a number of jailed environmentalists. "This is the model implemented in the Obama administration, with open doors and people coming and going," Rashedan said. "The Islamic Republic was concerned about this policy. I think if Biden wants to take this path, the Islamic Republic will be even more worried, given its experience with the Obama administration."

Exiled dissidents like Rashedan have, in any case, been adjusting their plans around a changed administration. One prominent opponent, Iran's exiled heir apparent, Prince Reza Pahlavi, has told this newspaper that he doesn't see the need for any talks with a foreign power to change the regime. "The important thing is the people's will," Pahlavi said.

It is unlikely the opposition will be able to get close to Biden.

There's already a desire within Iran, in other words, to change the regime, and what foreign powers should do, he added, is simply back that will.

Another activist, Shervan Fashandi, tells Kayhan London that Biden's foreign policy team had "already made some agreements" with officials like Foreign Minister Zarif or lobby groups acting on Iran's behalf.

"We know Zarif is close to the Democrats," he said. "I think it is unlikely the opposition will be able to get close to Biden and make particular changes to his policy on Iran. But you can pressure him, for example through news and information, or letters warning about the realities of Iran."

It would be "more useful" to approach Congress and "especially the Senate," where the Republicans may retain a majority, Fashandi added.

"Experience shows that when the Republicans hold a Senate majority, even without a Republican administration, they have stronger motives for listening to the opposition," he said. "The American government's official agreements have no validity without Senate ratification."

The leaders of the Islamic Republic say the economy will soon improve. But the numbers — the ...