Fossil Fuels Must Go The Way Of The Dinosaurs, Now

As the 20th UN Climate Summit begins in Peru, one faster way to fight global warming is to steer investors away from oil and gas, and bet instead in clean energy. The planet depends on it.

BERLIN — The oil industry doesn't get reflective about much, but it does about low oil prices. For whatever reason, the price has fallen so low that investors are now thinking long and hard. Should they go in for expensive deep-sea oil production? Exploit the Arctic? Put more money in tar sands and fracking? Each one of these extraction methods is ecologically crazy and devastating for the environment — but as a general rule those are not concerns that worry investors. Their world turns around prices and returns. The driving force is survival. As soon as oil prices rise, they'll be drilling again, and it doesn't matter how or where: The industry must go on.

Except that it can't. When ministers and international civil servants meet in Peru today for the 20th UN Climate Change Conference, they'll be discussing the end of the oil industry. They will talk about shutting coal mines and the massive conversion of developed economies. Nothing less than that lies behind the abstract words "climate protection." If we want to brake global warming and its dramatic consequences, we have to stop using oil, coal and gas. And not whenever: It has to happen within 50 years. For investors who see interest and repayment and profits in terms of decades, 50 years is little more than the blink of an eye.

Money changes the world, and money can stand in the way of change. Money prevents change everywhere there is an oil well that hasn't been exploited or a coal-driven power station that hasn't been written off yet. Every new drilling platform, every new power station cements the path to climate catastrophe. But anyone who wants their capital back with interest cares little about long-term consequences. That's the way the downward spiral works in a world built on coal and oil.

Money can change the world

But money properly invested can stand circumstances on their head. It is estimated that over 70 billion euros ($87 billion) will be spent on infrastructure worldwide in the next 15 years: on building cities and roads, energy supply, agriculture. Seventy billion euros can change a lot of things. It can help make rapidly growing cities more climate friendly. It can pave the way for renewable energies and spur alternative energies. It may take 50 years before the world functions without fossil fuels, as it must, but the course has to be set now, by investors. 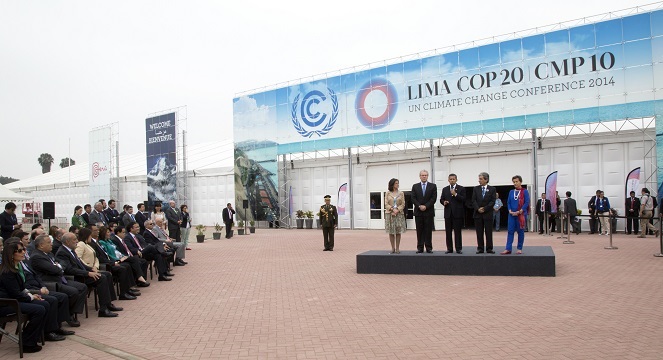 They'll need some encouragement. One motivation could be willingness by the United States and China to join the fight against global warming. But more important would be a viable 2015 climate agreement, and that's in the preparation stages in Peru. An emission tax on fossil fuels could also change the course of investors. If the price of carbon dioxide emissions rises long term, investors will react. Years ago, the EU introduced just such a tax but let it peter out, which suits Europe's fossil fuel lobby just fine.

Some people are thinking even further. Fortunately, the first pension funds and insurers are taking their money out of the oil business, which is in the best interests of their investors and the insured. The World Bank and other large development financers are no longer offering credit for new coal-driven power stations. It's absurd that in a country like Germany, which is in the process of changing its energy sources, there is currently serious discussion about whether a subsidiary of the KfW Development Bank can keep financing coal-driven power plants. It cannot, of course. The message must be: Forget fossil fuels.

Energy companies all over the world, quite a few of them state-owned, have spent billions on fossil fuels. Entire social systems and ruling houses in South America and the Middle East depend on the income. Shares in these companies are part of the retirement planning of millions of investors. Up to now the value of these companies has been measured on reserves of fossil-based raw materials that they'll never be able to maintain if the climate collapses definitively. And if the world fights global warming, these companies and investors will be shown to have taken a huge gamble.

Investors don't just love returns, they also like clarity. They need clear signals that states want out of the climate spiral, that they are taking up the fight against global warming. You can earn good money with clean energy too.

In the movie version, the contagion would lead to lawlessness and chaos. But in reality, institutions are encouragingly resilient.

Coronavirus And Us: Why We Ignore Other Infectious Diseases

The level of media attention given to the coronavirus compared to other maladies says a lot about the economic and political power of the countries affected.