The venerable old city needs to embrace innovation and stop putting all of its eggs in the tourism basket, writes Italian-born architect and MIT professor Carlo Ratti.

What strikes us most about the flooding of Venice in recent days? Probably the images of St. Mark's Basilica inundated for the second time in less than 400 days, and knowing that the four previous times it was flooded took place over a span of 1,200 years.

In the coming decades, even modest climatological changes could be fatal to the city known as "La Serenissima," with its fragile network of streets, fields and buildings at the water's edge.

This is why so many people are now contemplating the possibility of an apocalyptic scenario, and asking how much can be done to avoid one. Some are even invoking the possible "death of Venice." But I believe there is something else that should alarm people more: the death of Venetians.

It's not a question of numbers — cities have never been mere material products. To revive the urbs, the physical city, with its walls and its streets, the civitas must exist — a society of active citizens ready to participate. And today the Venetian civitas is practically dead.

Some are even invoking the possible "death of Venice."

There are many factors that contributed to this result, starting with poor choices the city made in the 1980s that channeled money away from universities and innovation, things that today could have become engines of development and drivers of excellence. Instead Venice took the easy route by focusing just on tourism revenue.

The civic emptying of Venice and the hemorrhaging of residents from the downtown area have deprived the city of a natural check that once kept the territory and environment under control. It has shut the city into a feedback loop of whining inaction, as we were reminded by the politicians' declarations in recent days (what a difference from the spirit of those who in previous centuries raised "La Serenissima" to great heights!).

In short, I think this is the moment to think about how to react. And doing so requires more than simply repairing MOSES, the system of hydraulic dams. More than embarking on another pharaonic construction project, what we need are extreme and courageous gestures. 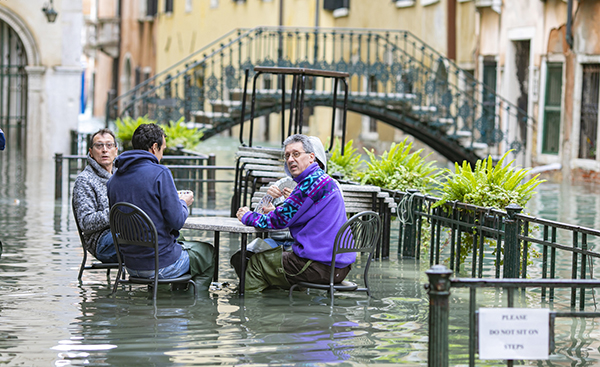 Life goes on in spite of the high water emergency — Photo: Sergio Agazzi/IPA via ZUMA Press

The story of Venice these last few decades (leaving aside a few enlightened leaders) has been that of a dramatic tragedy. The first possible response, then, should be to withdraw the City of the Lagoon from Italian jurisdiction.

This isn't about restoring the short-lived Republic of San Marco (1848-1849), as some nostalgic secessionists would like. But Venice should become a new city, managed under international jurisdiction. It should be an open city, where anyone can arrive and quickly obtain the full rights of a citizen, as long as his or her state of mind is not that of a responsibility-deprived tourist.

To reconstruct the true civitas, Venice just needs to open up to the world, summoning with a rallying cry all who have concrete projects and ideas: innovators with business ideas (and the funds to implement them); students ready to spend a few years in the lagoon to restore its magnificent palazzos; engineers capable of finding new ways to handle climate change (the problems of the lagoon today could be those of New York tomorrow).

It will take more than simply declaring Venice an "open city" to reverse this long-running decline.

What's needed, in other words, is anyone willing to engage themselves and contribute to rebuilding the glorious but now decrepit Venetian civitas. Venice would then become a land of experimentation for a never-before-seen urban model: a place in which to test a bold new "citizenship pact" suited to the contemporary world's "space of flux."

Such a solution may seem fantastical, but it is not without precedent. When Venice was decimated by the Plague in the mid-14th century and lost 60% of its native population, it decided to open itself up to foreigners, accepting not only immigrants but offering Venetian citizenship to those who planned to stay long-term.

This type of citizenship was based on the will of non-Venetians to absorb "Venetianness," including the desire to work. There's no reason why such a method shouldn't work today, as the city is confronted with the contemporary plague of tourism, which is slower, perhaps, in its level of contagion, but more ravaging in its effects. Indeed, from the 1950s to today the population of Venice has dropped by about 70%.

To be sure, it will take more than simply declaring Venice an "open city" to reverse this long-running decline. Important physical and infrastructural interventions need to take place, and to be carried out without stumbling blocks. But by the same token, we can't delude ourselves in thinking that a single engineering project can repair all the damage done by decades of progressive emptying out of the city of its residents — and, as a consequence, its soul.

It doesn't make sense to work on the urbs if we negate the importance of the civitas. To save Venice, we have to save the Venetians — above all from themselves.

Italy's Election, A Sign That Trump Could Pay For COVID-19

Our Italian columnist has a chuckle at those wagging their social media fingers at the new movie ...