WINDHOEK — A train trip through Namibia? Several times a year, the Desert Express travels a loop through the most beautiful areas of Namibia, which is more than twice the size of Germany. The trip is far more comfortable than the alternative — a strenuous bus journey along dirt roads.

We start out in Windhoek, which for most tourists is the gateway to Namibia’s attractions. Before the train leaves the station, there’s still some time to look around the city. Travel guide Bianca Preusker recommends the “Ink Palace” (seat of the country’s legislature), Christ Church, and the Equestrian Monument made for the German Emperor Wilhelm II, as well as a stroll on Independence Avenue, formerly Emperor Street. (From 1884 until 1915, Namibia was a German colony.)

A few steps from town center lies the gleaming white railway station where “Poor Old Joe” sits out front. Railway enthusiasts love the narrow-gauge locomotive, one of over 100 imported from Germany that took the Windhoe-to-Swakopmund-and-back route from 1902. 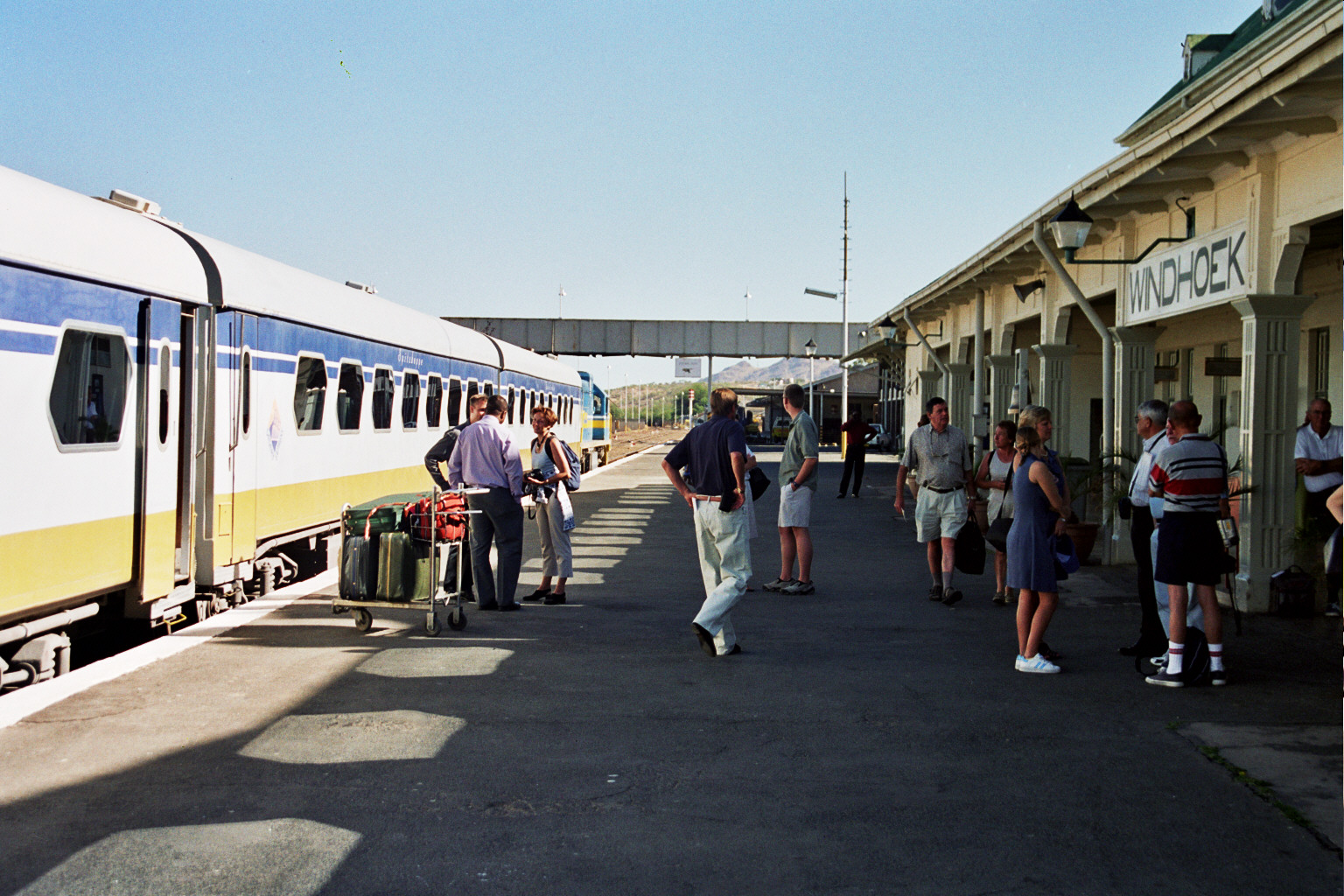 Taking the train at the Windhoek Railway Station — Photo: Fihliwe

Although there are hardly any trains transporting passengers now in Namibia, the Desert Express awaits us this day. It doesn’t look very prepossessing from the outside, so the luxury inside comes as a surprise: 24 air-conditioned sleeping car units, comfortable, decorated with care and equipped with small en suite baths.

The name “Express,” however, is not well-chosen, as the train never exceeds 40 kilometers per hour as it rolls through the desert and semi-desert landscape that unfolds outside the large panorama windows in the dining car, where up to 48 guests are now enjoying their first African dinner.

What the cooks manage to produce in the tiny kitchen is astonishing. This time it’s juicy Kudu (antelope) steak as a main course. South African red wine or a well-chilled Windhoek Lager brewed to German standard are both winning beverages to accompany the meal. Following after-dinner drinks in the bar, it’s off to our cabins where busy hands have transformed the upholstered seats into comfortable beds.

In the early morning, the Desert Express reaches Holoog station, where busses await to transport passengers on dirt roads to one of the country’s wonders of nature — Fish River Canyon, up to 550 meters deep.

The next day train passengers pack a small bag and move on for two nights to the Sossusvlei dune lodge. On the way there, the bus stops at Maltahöhe for brunch. It’s unusual indeed to smell coffee and freshly baked bread in the middle of the desert. And there’s time to enjoy it on the shady terrace of this establishment founded in 1907, one of the country’s oldest hospitality venues. 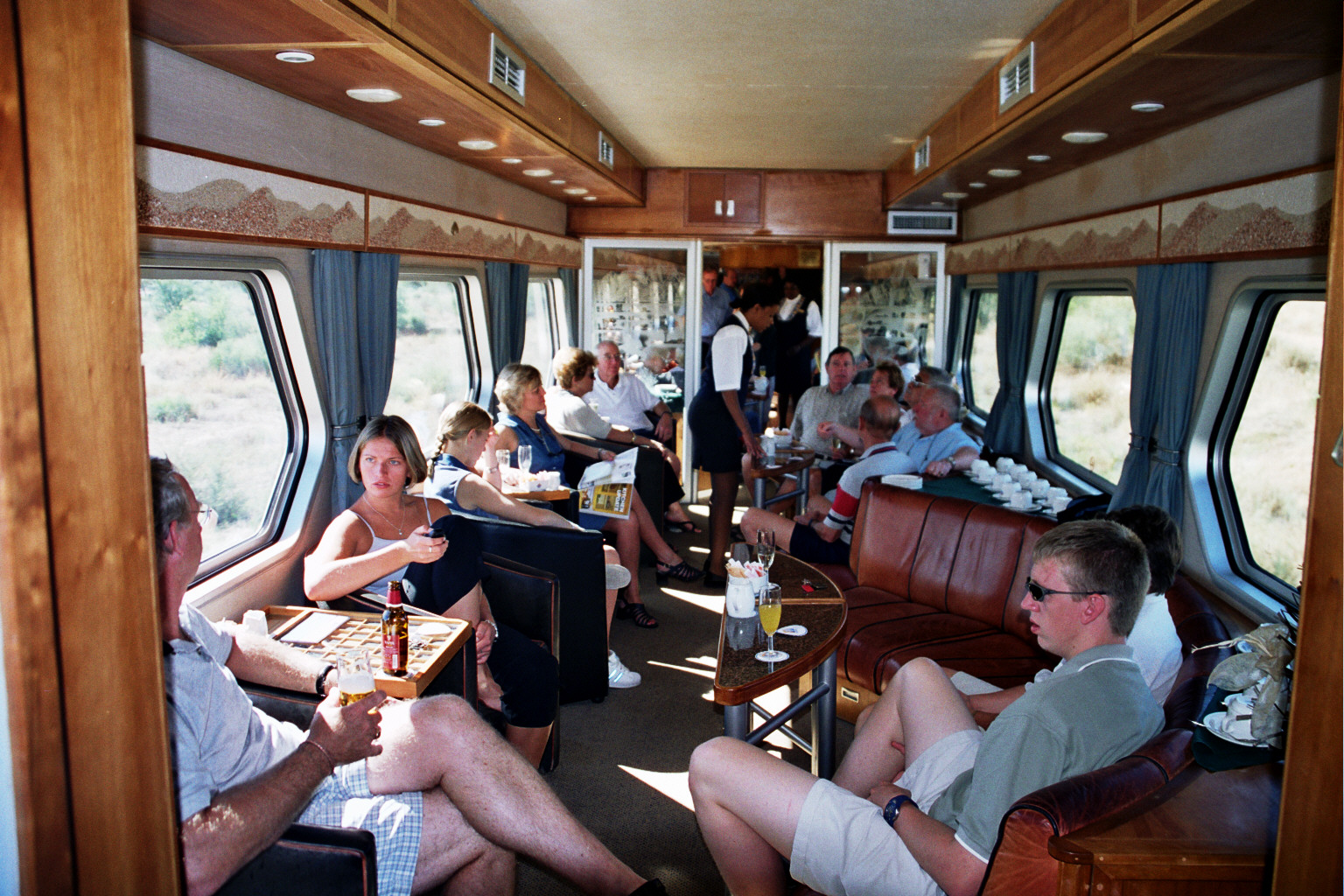 At Sossusvlei, the early morning hours are the best times to be out and about. That’s when the rising sun divides the massive dunes into two halves: one shimmers like gold in the mild sunlight, while the other is in the shadows and appears dark.

“It’s easiest to climb up along the ridges,” guide Preusker says from experience. “Walking through the sand requires a lot of strength, and you find yourself breaking out in a sweat pretty quickly,” she adds. The view out over the bizarrely formed dunes as far as the eye can see makes the effort worthwhile.

The photographers among us are also spoiled for choice the next day. On the bus ride to Swakopmund, there are oryx antelopes and springboks to see, and the city on the Atlantic offers plenty of pastel-colored Art Nouveau buildings dating back to Wilhelm’s day. Names lile Woermannhaus, Alte Brauereistube and the Hansa Hotel are reminiscent of colonial times.

Things are more modern at the chicly designed Restaurant Jetty, where panorama windows look out onto the ocean and glass floors reveal the sea beneath their feet. Diners can also watch as food such as sushi is prepared before them.

In Swakopmund, the Desert Express is ready to be boarded for the trip back to Windhoek. At Usakos the train stops for an excursion up the 1,700 meters of the Spitzkoppe, Namibia’s Matterhorn. These rock formations are not only a favorite destination for climbers, they are also the site of rock paintings thousands of years old.

Back on the train, we get a tasting of biltong, cured meat made of game, beef or ostrich that is a favorite accompaniment to beer and wine.

After passing through the Otavi highlands on a newly built stretch of track, we take another two-day leave of the Desert Express for excursions in the Etosha National Park, spending the nights in safari lodges.

“There! Behind there. Do you see them?” the guide whispers, pointing from the Jeep at two lions under an acacia tree. Animals are not necessarily seen on every trip, so this is an added bonus.

But there’s always something to see at the water holes. Springboks and zebras approach cautiously, and later giraffes and elephants put in an appearance. You can’t get closer to the animals than here. There are animals to be seen on the way back to Windhoek as well, as the tracks also lead through game farms.

The beautiful African dream starts to fade as the first houses in Windhoek appear, signaling our return to civilization.

Three months ago, as the pandemic began to spread beyond Asia, many worried that Africa was particularly vulnerable to COVID-19. Yet, so far, the toll has been relatively contained across the ...

In Namibia, Open Wounds Of Germany's "Other" Genocide

Thirty years before Hitler's crimes, Germany's southwest African colony was the scene of mass killings of ethnic Hereros, whose descendants are still waiting for answers.