The Ital Diet, A Rastafarian Recipe For Eating Right

For a combination of spiritual and political reasons, Rastas developed a diet based on healthy, local ingredients that was a precursor, it turns out, to some current food trends.

Bob Marley used to drink a strange beverage every morning made of a reddish colored seaweed known as Irish moss, so named because it's thought to have been introduced in Jamaica in the 17th century by Irish immigrant workers. The algae has been growing on the coast ever since.

The drink derived from it, known for its high content of vitamins, iron and calcium, is now marketed in a ready-to-consume version. It has little to do with the brew that was so dear to the king of reggae. Either way, the Irish moss beverage is part of what's known as the "ital diet," which was born with the Rastafari movement in the 1930s.

The word "ital" is a contraction of "vital" and "I" (the unifying English pronoun "I" favored by Rastafaris), and the diet that goes with it consists mainly of vegetables and unprocessed products. Homemade is the key word for ital followers.

Jamaican chef Rasta Mokko, one of the leading exponents of ital or vegan cuisine, takes the time to simmer his Rastafarian nectar over a low flame in his garden, commenting on the benefits of the fruits and plants that grow on his land.

"I add lime, milk and it makes Supligen," he jokes in a video posted on his successful Ras Kitchen YouTube channel. "With that, no more prostate cancer."

In a sad irony, Bob Marley died of melanoma skin cancer at the age of 37, despite drinking his homemade, iodized concoction daily.

For Rastas, preparing their own food means rejecting consumerist society.

"For Rastas, preparing their own food means rejecting consumerist society," says Alexandre Grondeau, founder of reggae.fr, one of the first French media outlets dedicated to the genre and its culture. "We can see a political interpretation, because to consume what we produce is to be anti-Babylon, anti-colonial."

"The goal of this diet is to ban all food that was imported by the colonists," says the 66-year-old, who also works as a caterer for Jammin Voyages, an agency specializing in customized trips to Jamaica. "The ital diet encourages us to eat what grows naturally on our land."

This fervent defender of Pan-Africanist movement says the idea is also "to get closer to our slave ancestors who grew their own food during the colonial era." Thus, items on the menu in his colorful canteen include vegetable-based stews and soups that also, in some cases, contain fish — "to support local fishing," he says.

Vegetarian or vegan, the ital diet has several variations. Bob Marley himself allowed some fish on his plate, but never went on tour without his chef.

"Marley did not go to restaurants," says Alexandre Grondeau, author of Bob Marley: A Universal Hero. Grondeau recalls that during his first tour with the Wailers in England, in the early 1970s, Marley had to find something to cook ital. "But it was winter. There were no vegetables and everything was expensive at the time," the author explains.

Cooking at home, cultivating and eating locally: a triptych that is reminiscent of the consumption patterns encouraged by environmental protection activists in the context of the current ecological crisis. Like vegans, followers of ital cuisine do not eat meat or animal products such as milk and eggs. Environmentally-friendly before its time, their approach is less political and social than spiritual.

Rastas want to free themselves from Christianity and yet their eating habits are drawn from the Bible.

Rastas want to free themselves from Christianity, a religion imported by European settlers. And yet, their eating habits are drawn from the Bible: "And God said, Behold, I have given you every herb bearing seed, which is upon the face of all the earth, and every tree, in the which is the fruit of a tree yielding seed; to you it shall be for meat." (Genesis, 1:29).

This pattern of consumption is also influenced by passages from Leviticus, and embraces what's known as the livity movement, a contraction of "live" and Leviticus.

"We can also see an animist approach inherited from African spiritualties," says Coralie Jouhier, co-founder of the ital and Afro-vegan restaurant Jah Jah le Tricycle in Paris. "Some pioneers of the Rasta movement like Leonard Howell, apostle of the return to Africa, encouraged being aware of what we eat, to be close to nature, to respect the cycle of life, his body and his spirit," Jouhier adds.

"One day I was in the studio in Jamaica with [the reggae star] Anthony B, and we wanted to have food delivered," says Alexandre Grondeau. "He was amazed and said: 'You see, I eat what I am, that's why I'm healthy. We've never seen a carrot go crazy like your cows do!'" 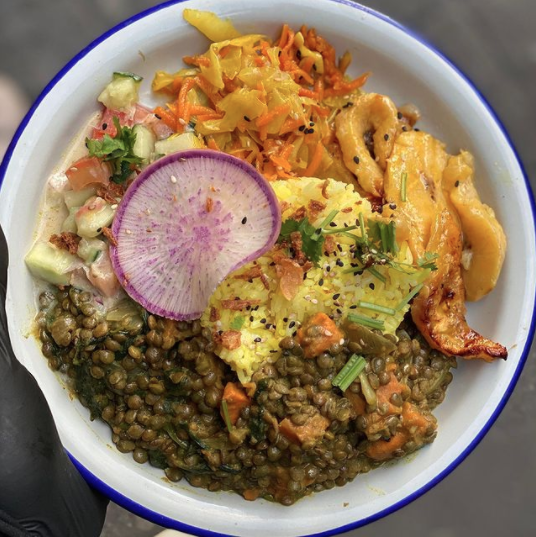 At a time when being a city dweller in Western capitals is synonymous with chia seeds and yoga, the ital diet is slowly beginning to be accepted in practice. But for a long time it was an oddity, something associated with out-there 1970s eating habits.

"Today, concert organizers no longer receive Jamaican artists the way they used to, by laughing at them and serving them platters of cold cuts," says Alexandre Grondeau. "Society has changed its view and has understood that Rastas were avant-garde in their way of eating."

The movement has spread beyond Jamaica's borders to U.S. and British artists such as Jah Sun and his song No Bones No Blood. There's also Macka B and his ital anthem What We Eat. Both continue to advocate this culinary philosophy in music.

In the meantime, there's still the question of certification. A label is being structured in the United States for an official recognition of this almost century-old diet. "It's only a matter of time," says Coralie Jouhier. "I'm convinced that ital products will soon be available in organic stores."

Legalizing It In Jamaica: Marijuana Laws Mellow In Land Of Rasta

OLD HARBOUR — Jerry and his brother Steve, both in their thirties, thin ...

Why Jamaicans Are The Sprint Kings: A Scientific and Historical Explanation

The athletic potential of a nation relies on several cultural, social, biological, genetic ...