Go ahead and smile... - Jorge Royan

New research in Germany shows that something triggers after decades of adulthood controls. And no, it's not retirement or grandparenthood that explains the changes.

BERLIN — "People never change..." It's one of those phrases we say among family, mostly with a sigh of resignation. Grandpa's the way he is because he was always that way, you know about teaching new tricks to old dogs. Mostly this refers to character, for example, just how open and easygoing Grandpa is. Or is not.

Historically, such popular notions were backed up by psychological research. "It had been recognized that during the course of a life, personality traits stabilize, and research mostly wasn't conducted with those over 30 or 50," says Jule Specht, a psychologist at Berlin's Free University.

So she conducted further research, and what she found was that many people change markedly at about age 70. That's the time in development at which one in four people takes on entirely different personality traits, Specht has found.

With her colleagues Maike Luhmann and Christian Geiser, Specht evaluated data from two large population studies in Germany and Australia. The German data comes from the German Socio-Economic Panel (SOEP), a study conducted over a long period with thousands of people questioned each year since 1984. The data is invaluable for psychologists researching patterns in lives.

Specht and her colleagues evaluated material from 2005 to 2009, during which more than 23,000 people offered regular input about their character traits. Participants were between the ages of 16 and 82 and were asked to evaluate their personality traits according to criteria psychologists refer to as the "Big Five" — emotional stability, openness to new experience, easygoingness with others, conscientiousness, and the degree of intro or extraversion that indicates whether a person tends to be withdrawn or outgoing.

From these traits, psychologists determine personality types. Specht and her colleagues found three main types among the participants, which is what they expected. Most people belong to the "under-controlled," "resilient" or "over-controlled" personality types. Resilient people, robust and resistant, are the ones that function best in daily life. These people are self-contained, capable, and seldom suffer from psychological issues. About half the 30-year-olds in Germany, Specht says, belong to this type.

Many of them, mainly young men, were "under-controlled" in their youth. Under-controlled people tend to be impulsive and stubborn, hostile to rules, and aren't overly conscientious about the way they do things.

"This personality stabilizes around 30," Specht says. This maturing could be biologically determined or explained by socialization hammered home in daily life. Anybody who wants to keep a job, for example, better learn to follow certain rules.

"Over-controlled" people tend to change their traits less as they mature. They remain emotionally sensitive, tend to be nervous, and are particularly dependable in their relations with others. Men and women are represented in approximately equal numbers in the different personality types. And they usually stay in that type for a while when they are over 30.

Among the middle-aged, Specht says, there were "relatively few changes" over the course of the four years that she evaluated. Among those over 70, on the other hand, all sorts of things began to happen. Their personalities changed in all possible directions. They were less controlled, lived more impulsively, or they achieved greater self-esteem and inner peace. Others turned into "over-controlled" personalities. All this applied to older Australians and Germans, men and women alike. 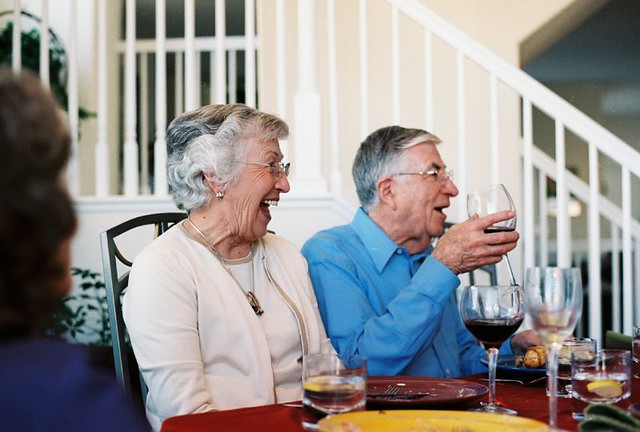 Her and him. Photo: Katinalynn

The researchers were surprised by the changes in character traits in older people, and so far have been unable to determine what drives these changes. After having tested for the influence of several different factors, they are only sure about what doesn't explain the changes.

Why it doesn't happen

For example, older people do not change because of retirement, becoming grandparents, because their partner of many years dies, or because they develop health problems. "These things do play a role but it's not particularly big," Specht says. The changes are also not genetic. Research has shown that genetic differences in older age largely determine a person's mental capacities, and the influence of their environment decreases.

The psychologists now want to research the possibility that people change their character traits in older age because they sense the end of life approaching. There has been research showing that people reaching the end of life reevaluate what's important. "In advanced age, people tend to work on themselves," Specht says. "They don't try to change others but rather themselves."

Do new traits better suit the different life circumstances of older age? Does not having to go to work every day engender a decreased desire in being productive? Or is it that older people can't keep up certain traits — for example, conscientiousness or nervousness — because they have less of the energy required to do so?

It could also be that Specht and her colleagues haven't yet discovered what's driving these personality changes in older folks "because we don't have an overview of all the changes and influence factors at that age," she says. Most researchers are relatively young, including 28-year-old Specht.

The psychologists have thus begun to make research trips to old people's homes in Berlin, hoping that residents will tell them what it means to be old.

In an open letter, more than 2,000 academics made the case recently for bringing students back into real, brick-and-mortar lecture halls.