Maradona Wasn't Just An Argentine, He Was Argentina

The South American soccer legend has left us, but his spirit and exploits will live on, along with the country he so perfectly personified.

One price I've had to pay for spending the past 50 years in the United States is that, except for on rare occasions, watching soccer is something I'm only able to through the television. I miss being a direct spectator, witnessing first-hand the exploits of stars making history in real time.

Still, I can say that I saw Maradona play — albeit in just two matches, both in Barcelona (but not with the Barcelona FC). One was the 1982 World Cup inaugural match in Spain, and the other in a subsequent match against Italy, when he had to abandon the field. Both historic chapters seem to me symptomatic of the life of the star and his homeland.

Argentina is my favorite Latin American country. I have devoted books to it. I have more friends and academic colleagues there than anywhere else. For me, walking in Buenos Aires prompts nostalgia for a bygone Barcelona. I always return there with great satisfaction, and always depart without resentment in spite of my irritation with certain social traits I find there.

I feel no other Latin American country has made so many systematic errors in an apparent bid to destroy the national essence. Argentina can boast it has the most varied of migrant populations in Latin America. Its nature is abundant, with the pampa plains assuring food and produce for one of the continent's most educated populations.

No other Latin American country has made so many systematic errors in an apparent bid to destroy the national essence.

Few colonial musical genres have the intimate personality of the tango. Argentine poets and novelists are essential to any bookshop's selection in the Western hemisphere. Argentines stand out in their respect for language, grounded in Spanish and spiced up with Italian sonority. Three Argentines at a meal will engage in exemplary table talk. Two together are a spectacle. Every Argentine competes seeks to outdo his or her own, magisterial discourse.

As one of novelist Mario Vargas Llosa's famous characters said (he talking about Peru, but it applies equally to Argentina): "When exactly did it fuck itself up?" The context was the economic crisis of the 1920s and 30s that walloped Latin America as a whole, and was especially rough on Argentina, where new waves of migrants found that the rural interior was already occupied and began to swell up inside the cities. They became the descamisados — the 'shirtless' proletariat — who rallied around Juan Perón, with no small amount of help from his wife, Evita.

Argentine populism is inimitable. The later Venezuelan leader Hugo Chávez lacked the right charisma and had no Evita by his side. I cannot imagine any remake or screen musical of "Don't Cry For Me Venezuela." Argentina's migrant society was seduced by a particular, and the most genuine, type of populism. 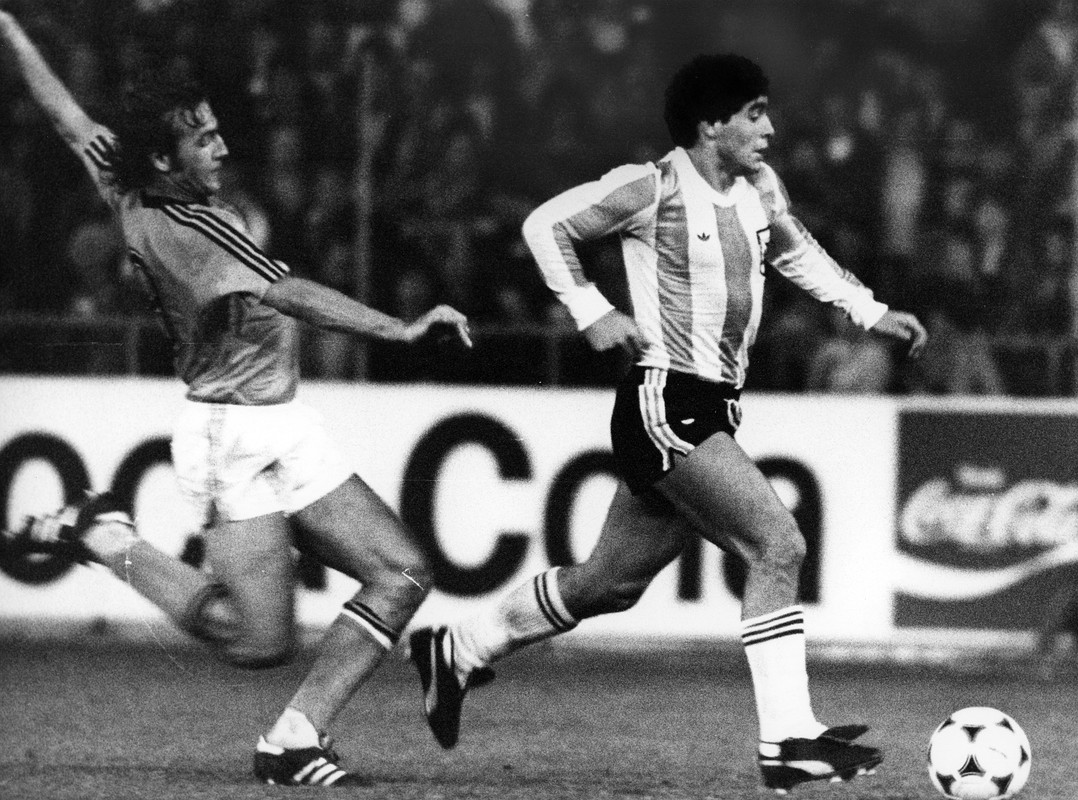 Once Perón and his wife were gone, the country fell into the harshest type of military dictatorship, the fruit of a Cold War conjuncture. Other nations in the region suffered the same fate. In the final years of the last junta, the country was dragged into a tragic invasion of the Falkland Islands.

That disaster coincided with the World Cup in Spain. As Maradona leapt onto the pitch, back in the Falklands, one of his relatives, a soldier in the war, was being held captive following Argentina's surrender. On the field, against Italy, the star was fouled left and right, at a time when yellow cards did not yet work and the red card never appeared.

His response was a hell of a kick, not of the ball, but on an Italian player's leg. He headed straight for the changing rooms, not waiting for the referee's order. Weeks later, he would join Barcelona FC, also known as Barça.

Everything was out of proportion after that. Yes, he boosted Barça. But in the meantime, more and more people there tried to influence him, and his conduct descended into darkness. A multi-million dollar offer took him to Naples, where his personal fabric degraded further.

His greatest sporting triumph was in the 1986 Mexico World Cup, where he took his country's revenge on England with inspired goals, especially the one scored with "the hand of God." In the 1994 world cup in the United States, he was disqualified after testing positive for drugs. The decline in his sporting conduct and health hastened.

This star of soccer's 'super-capitalist' firmament, then took refuge in Fidel Castro's public health service. He emerged, finally, as a certified trainer amid a range of personal and professional transformations in Mexico and Argentina. But then, in the end, his body could take no more.

Argentina, in the meantime, will continue to struggle along its rocky itinerary in politics and changing hues of Peronism. But as history suggests, it will also survive. And deep down, we'll continue to hear Maradona sing, even louder if you wish, "Don't cry for me Argentina, the truth is I never left you."

We'll have his footage, including his Hand of God, and all the kicks life gave him. We also have Lionel Messi still, for now at least, and even if he leaves Barça. And then there's enduring, eternal Argentina itself, there for all of us, Argentine natives and converts alike. And that's all we can really ask for.

*Roy is a professor and head of the Jean Monnet European Union Center of Excellence at the University of Miami.