In Paris, Chinese Prostitutes Driven Into The Shadows

In the Paris neighborhood of Belleville, home to a thriving Chinatown, prostitutes with no other prospects work to support families here or in China. And now, new dangers loom.

PARIS — When seeing the crowd on the Boulevard de La Villette in Paris, the women initially thought it was a police operation, which are frequent here. Two of the women hid in a Chinese supermarket, and others hurried down the streets leading to the canal. One of them approached us, discreetly. A movie was being shot that day, in the Asian parts of the Belleville neighborhood; the woman even went as far as to apply for a role. After all, the film was about a Chinese prostitute. Like her, a woman without papers. Like her, or rather, like them all.

Looking back, months later, the woman shakes her head when thinking about her crazy idea, as she imagines her face on a giant screen all over the world, perhaps even back in her hometown in the Manchuria region. Then, people would have found out that she doesn't work as a secretary in Paris.

La Marcheuse ("The Walker"), Naël Marandin's first film, was released in cinemas on Feb. 3, the same day that France's National Assembly considered a controversial prostitution bill. The bill would make it illegal to pay for sex and toughens the penalties for clients.

A few blocks away, some women seek shelter from the rain in a Chinese-style café with dragon-adorned teapots. On the other side of the window, high school girls are laughing in the rain, cheery and well-dressed. The women sitting in the café are between 40 and 60 years old, looking like ladies from the ghetto, dressed in dark overcoats and cheap jeans. There are 300 of them in the area, representing one-third of the Chinese prostitutes in Paris, all gathered in the neighborhood of Belleville.

Usually, their prices range between 20 and 60 euros. These days, some accept 10. It's been a tough winter, and in the cafe the women argue over who will pay for the espressos.

"We had nothing else"

"At first, we could not imagine we would sell our bodies," says a petite blonde. "But at the age of 40, a woman is worth nothing." In Paris, other girls — mostly French — have dubbed these women the "proletarians." Almost all come from northeastern China. In the late 1990s, a series of governmental reforms were initiated there during which everything closed for months. "We had nothing," the blonde says. In the sock factory where she was working, employees were advised to "take something, sell it on the sidewalk" because they weren't coming back. Meanwhile, at the other end of China, a new economy was built through textiles, electronics and enlisting battalions of rural youth. One working class replaced another.

In the café, a woman with professor-like glasses says she was a saleswoman, artisan, entrepreneur. But after the Chinese reforms she emigrated to the West. There was only one way of doing it: She paid 11,000 euros in cash for a fake temporary visa. After flight transfers in London and Frankfurt, she arrived in Paris. "You understand the reality when you get here," the blonde says. "Emigration for us is like a man who goes to war: We hope to return victorious. For us, that means money," says one woman. She says she has no recollection of her first time with a man here. "How can you forget? My heart has turned cold," the petite blonde retorts.

On the opposite side of the street, Naël Marandin, a 35-year-old film director and a neighborhood resident, sits in a bar. After graduating from the prestigious Paris Institute of Political Studies, he was inspired by one of his professors to turn to movies. As a kid, Marandin enjoyed theater, and played the lead character in Les Allumettes suédoises ("The Safety Matches"), the best-selling Robert Sabatier novel that was adapted for television in 1995. At 19, he left for China seeking adventure. Marandin learned the language, worked as a bartender and TV presenter, was part of an NGO in Tibet and then starred in a play.

When he returned almost two years later, he started working for associations engaged in Chinese emigration. The Lotus Bus is one of them, a program in which doctors are working to improve health access for sex workers. One night a week, the Lotus minibus stops in Belleville.

"The project has grown with the influx of highly vulnerable Chinese women, who we saw arrive after the 2003 Sarkozy statutes," says Nathalie Simonnot, one of the pioneers at Lotus Bus. "Before, they were able to find jobs illegally, but the tightened sanctions against employers hiring illegal workers limited their options." At the same time, another law was passed, making passive soliciting an offense. Simonnot characterizes it as "a huge mistake" because "the women now take refuge in more remote places, putting themselves at higher risk."

More than half of these women have experienced physical violence: 38% from rapes and 28% from kidnappings, says Jean-François Corty, director of the French humanitarian group Doctors of the World.

At the cafe, the blonde talks about her daughter, who lives in Manchuria. "She studies design," she says, lowering her eyes to veil her pride. "A parent must give everything to his or her children. Everything, everything, everything. We just do not live for ourselves."

Another girl with curly hair jokes, "I have no children." The blonde asks her, "To do what we do, you need a compelling reason. What is yours?" Everyone grows silent and their faces all turn towards "Curly Hair." She hesitates. Even among each other, they avoid giving details because they value their privacy above all else. They want nothing to be traced back to them.

The blond insists, "So what's your reason?"

The girl looks down and answers, "We live in a mountain village. We own a table, a bed and a little rice. We had to borrow money to look after my father, then we purchased a pig in hopes of paying off the debt faster. The pig died. I was the only chance to save the family honor."

Suddenly, someone screams, "Police! Police!" The Belleville intersection is the junction of four districts, each with its own police station. Sometimes the uniforms make raids — eight people were arrested Feb. 1 — to harass or to protect. Over a period of 10 years, five Chinese prostitutes have been murdered. The last became an icon. Witnesses saw her leave with a man who was known to be violent. She knew too. But she needed money for her daughter. It was a 30-euro job; she was stabbed 24 times. The daughter stayed in Belleville, preferring to die here as her mother did than tell her family about the circumstances of the murder.

In reaction to these events, a group of women created an organization called Steel Roses in 2015, and its members wear masks for public appearances. Like other associations, they were consulted by parliamentarians when the prostitution law was being drafted. They realized that no one believed them when they said they were "slaves to no one."

"People fail to see that it's possible to perform sex work without a gun to your head," says Morgane Merteuil, a spokeswoman for the union of sex workers. "Which doesn't mean that there are no big economic constraints, like finding accommodation. It's less spectacular, but not necessarily easier."

The war of associations

For the first time in France, the new law will offer a "prostitution exit route" with rights, housing, benefits and training, including a temporary residence permit for undocumented people. But how to nurture real integration? In December, French Human Rights Defender Jacques Toubon stressed that the problem isn't the prostitute but the existence of prostitution itself. He said that merely leading these women out of prostitution isn't enough. This is one of many disagreements between associations involved in the issue.

But the question of penalty may be the most contentious. On Feb. 3, the Assembly decided not to remove the famous 2003 "offense of soliciting" law, which criminalizes clients. Does this law better protect prostitutes, as claimed by the movement Le Nid, or does it, on the contrary, entail a secrecy that enhances the dangers for these women, as Amnesty International suggests? 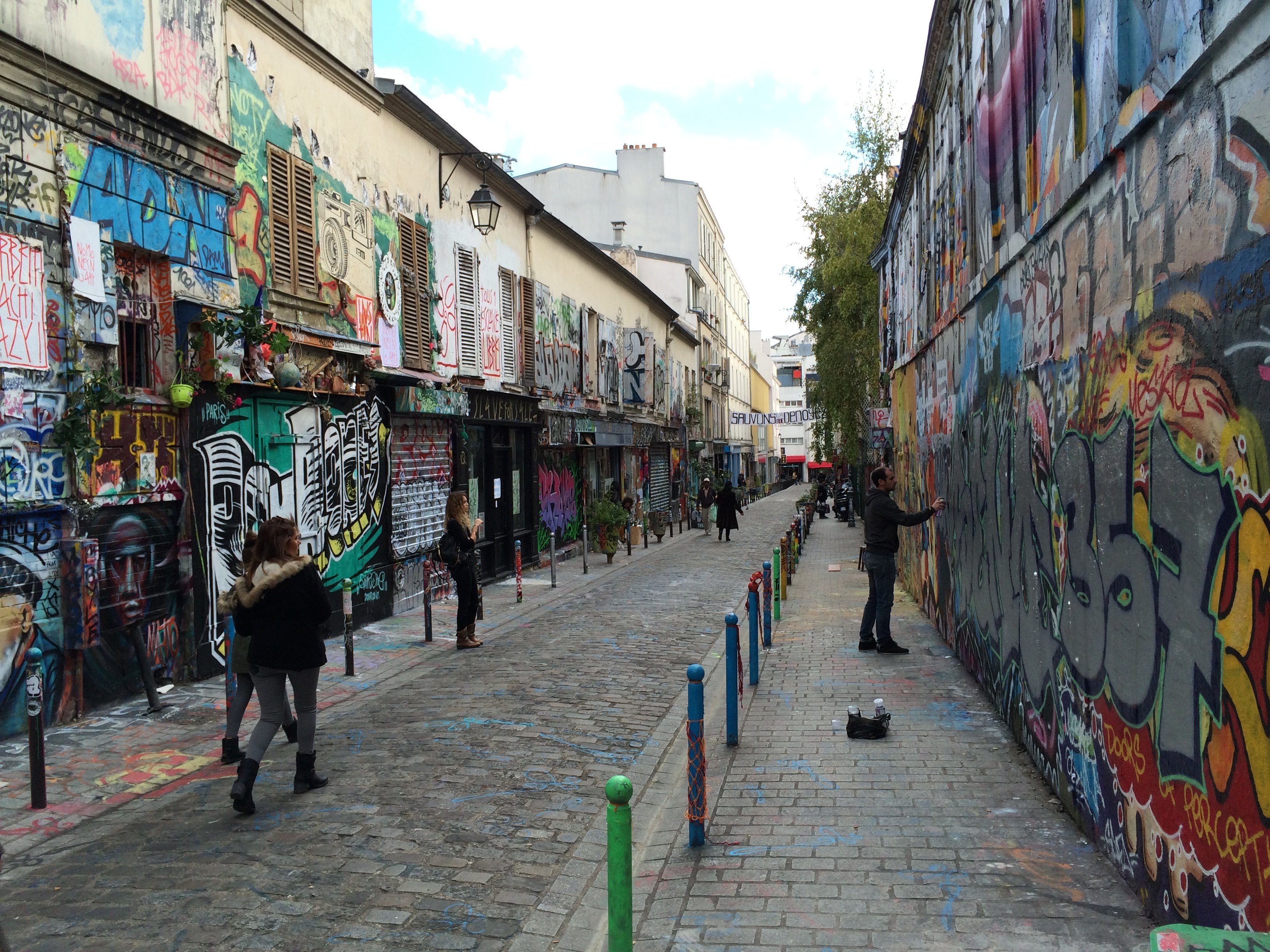 In general, Qiu Lan avoids Belleville. She came to Paris 15 years ago after falling in love with a French businessman in China. In Paris, she learned French and got into theater. A former dancer with the Peking Opera, and daughter of a renowned composer, Qiu Lan tried "to keep the lowest possible profile" when Naël Marandin took her to Belleville.

La Marcheuse is her first real role, and she was excited to play a prostitute. "It's a challenge, but that's my nature," she says. She recalls that women were ashamed, "especially in front of other Chinese." Southern Chinese immigrants, in particular, know that Parisians don't like them. Well-established Belleville business people who have lived there for generations regularly offer to pay for their return ticket in an effort to "re-establish a good image of the community."

After two years, the other girl has repayed some of her debt to the smuggler. In three more years, the petite blonde will have paid for everything. She could have done as other women have and married a local. A French man did propose to her, but she didn't like him. "Is it really right to do it only for the papers?" She refused.