How A Swiss Nutritionist Uses Whatsapp As A Weight-Loss App

Message while you eat - Symic

Changing your diet is not easy, but the power of messaging service WhatsApp keeps you connected to help keep you on track.

LAUSANNE — The group members commit exactly one month to achieve their goal: to change their poor dietary habits that have led them to store fat in their bodies, have trouble sleeping, lose energy or develop gastric acidity.

The group or their goal is hardly unusual: Peer pressure has long worked to help keep members on track. But the manner in which this group now bands together is shaped by modern technology. The group uses WhatsApp, the popular messaging service, to reset their body to a healthier rhythm.

Olivier Bourquin, a Swiss neuro-nutrition specialist, is the brainchild behind this group. He forms three WhatsApp groups every month, each with about a dozen patients who want to improve their diet. Bourquin first meets each member to determine their state of health and level of metabolism, and then sets them goals and counsels them. The next day, he continues to offer them advice but on WhatsApp. And he does so for a month.

Pascal Meyer, the head of retail company QoQa, took up the challenge with 18 people from his office. "It's fun, people challenge each other," said the 35-year-old manager, who lost five kilograms (11 pounds) during the period.

Meyer, a wine enthusiast, remembers one night when he really wanted to open a bottle of good wine. So, he asked Bourquin, â€˜If I run five kilometers, can I?'

Bourquin, author of the book La Performance Sur Mesure ("Made-To-Measure Performance"), said his philosophy "enables individuals to improve or maintain their health or performances, all the while enjoying themselves." 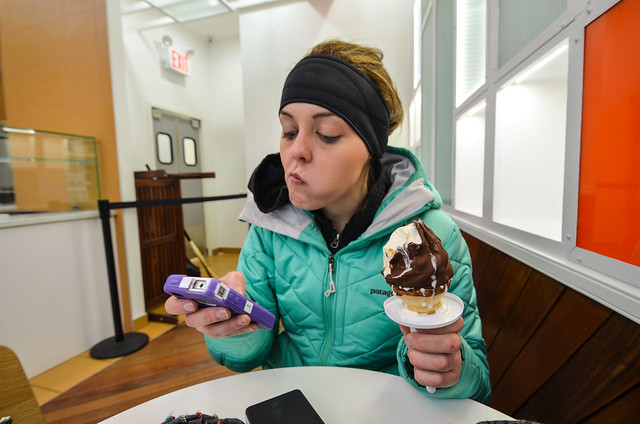 The golden rule of the WhatsApp group is to constantly communicate about the ongoing challenge. Bourquin says group members exchange healthy recipes and share their thoughts on the difficulties they face.

The groups are similar to non-virtual groups, Bourquin notes. Sometimes, you share a lot, sometimes you don't. There are always people who dominate the conversation but Bourquin said he also guides the exchange. "I used to not work in groups before. WhatsApp opened up great possibilities."

But there are limits to the conversation. When a participant "describes the color of his poop to the whole group," Bourquin steps in to set boundaries.

The goals of group members can vary. About a third of the participants don't want to lose weight. Instead, they want to reset their habits because they have trouble concentrating, sleeping or have intestinal problems.

"And it's OK to be part of the same group of those who want to lose 10 kilos. There's such plasticity with the brain, you can easily regain control of your body and its organs," said Bourquin.

But not all aspects of the new platform are perfect, especially for the man running it. Some patients ask Bourquin questions "on Sunday nights, at midnight," hoping to receive an immediate answer. "During the day, I have consultations, I give lectures, I do everything to answer as fast as possible, in two or three hours. And when demands are a bit more personal, I tell people to write to me in private. But without exaggerating."

What happens after the month-long challenge? Some continue, but even those who move off the program often stay in touch and keep on encouraging each other.

"The groups stay together," Bourquin says. "A small community is being created."

Iranian authorities have proven themselves amenable to online pressure. But to effect lasting change in the Islamic Republic, people also need to engage in real-world action.