As countless important women remain unrecognized in their fields, a collection of campaign groups are springing up to fight to fight that

WASHINGTON — Nearly everything I know about Martha Mendoza, I learned from her Wikipedia page, which, as of a few weeks ago, did not exist. Mendoza is a two-time Pulitzer Prize-winning journalist. Her series about forced labor in the seafood industry led to the freeing of 2,000 enslaved Southeast Asian fisherman; because of her articles, Congress passed legislation requiring more transparency from food suppliers.

Her work is important and forceful. The absurd lack of recognition for her contributions on a Wikipedia page could have been for a lot of reasons; but it might have been related to one in particular: only about 18 percent of Wikipedia's biographical articles are about women. That's up 3 percent from a few years ago, according to the Wikimedia Foundation. But it's still a reflection of the fact that, "contributors are majority Western and mostly male, and these gatekeepers apply their own judgment and prejudices," the foundation wrote.

So, grass-roots organizations have set about trying to change the ratio. Groups such as Art+Feminism sponsor regular "edit-a-thons," to train more diverse groups of Wikipedia editors, and to publish a broader range of articles.

Martha Mendoza's article was created by Mintaro Oba, a Washington, D.C.-based speechwriter whose colleagues at West Wing Writers recently decided to launch a side project: making more Wikipedia articles about women. As writers themselves, they opted to focus on authors, journalists and poets.

"Most male journalists who have two Pulitzers have Wikipedia pages," Oba notes. So when he learned about Mendoza, he wanted to make sure his submission was approved. He backed up the article with an "epic onslaught of credible sources," to craft an airtight argument for her inclusion.

Most male journalists who have two Pulitzers have Wikipedia pages.

Coming up on Women's History Month - and in the middle of Black History Month - I've been thinking a lot about the phrase "rewriting history," and how it's almost always presented as a negative or an impossible. You can't rewrite history, proponents of the Confederate flag say to those who want to take it down.

And yet so much of progress requires doing exactly that: rewriting history. Digging out new sources. Making our collective encyclopedia bigger.

Last year, the New York Times launched a project titled "Overlooked," which retroactively writes obituaries for forgotten people - women and people of color whose deaths were not considered historic enough for obituaries when they happened. This month, among others: a children's welfare advocate who helped more than 500 mixed-race orphans find homes after World War II and a clothing designer who outfitted Ella Fitzgerald and Eartha Kitt.

One of Oba's colleagues, Ilana Ross, who spearheaded the company's Wikipedia project, told me the group had tried to submit a Wikipedia article on the New Zealand writer Alison Waley, but it was rejected. She showed me a screenshot of the rejection. Perhaps, it posited, Waley could just be part of her husband's Wikipedia article instead? 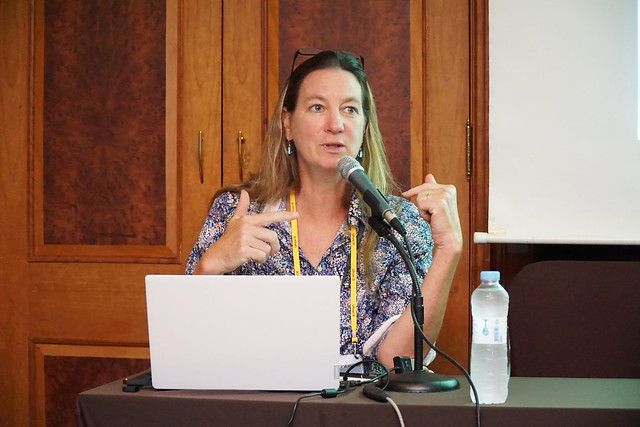 Mendoza, a two-time Pulitzer Prize winner, previously did not have a Wikipedia page — Photo: Khairil Yusof

It was complicated, Ross said, because Waley's most famous work was, in fact, a memoir about life with her husband. He was a noted translator whom Waley had known for years, though they only married shortly before his death. While Arthur was receiving public accolades for public work, Alison was cataloguing the private, quotidian parts of life: portraits of time, place, parties and people.

But wasn't that also valuable? Ross asked. Weren't those things also important contributions to history - a way of understanding how people lived and what the world looked like?

I emailed Martha Mendoza a few days ago. She didn't know she had a Wikipedia page until I told her. And while she was pleased with it - it's a good, factual article, she said - her reasons didn't have anything to do with honor or recognition. She simply thought having one would make her job easier. Now, when she approached a source for a story and asked for an interview, she could direct them to her page to prove she was a real journalist, and to help them understand the kind of reporting she did.

It seemed unseemly and self-aggrandizing to her; she couldn't imagine actually suggesting it. She was glad she hadn't needed to, and that someone else had seen her.