Ein, Zwei, Dry: The German City Where Water Has Run Out

Firefighters of the Lauenau Volunteer Fire Brigade in Germany tapping fire water from the tank of one of their emergency vehicles. - Moritz Frankenberg/DPA/ZUMA Press
Sonja Stössel
DIE WELT
2020-08-25

BERLIN — Germans are feeling the heat. For almost a week now, temperatures have been over 86 °F (30 °C) in most of the country, and every day a local council pleads with its residents not to fill up their paddling pools again. Last weekend, authorities asked residents of Lauenau in Lower Saxony to buy bottled drinking water because the reservoir that serves the town's 4,000-strong population had run dry. Anyone who wanted to flush their toilet had to take their containers to the fire station and fill them up.

Is increased demand during the pandemic-struck summer overwhelming water supply? No, says Martin Weyand, director of water supply at the German Association of Energy and Water Industries (BDEW). "Overall, the supplies of drinking water are sufficient. There is no water shortage in Germany." He does not expect widespread problems like those in Lauenau.

But hot summers have an impact on water demand. According to the BDEW, the average German uses around 122 liters of water a day — "uses," says Weyand, "not ‘consumes.'" He stresses that the water stays in circulation. During the record-breaking heatwaves of 2018 and 2019, water usage was significantly higher, around 127 and 125 liters per person respectively.

During heatwaves, demand rises by between 40 and 60%, which can overwhelm a system designed to cope with lower, more consistent usage. It means residents have to hold off on watering gardens or filling pools to give the reserves time to refill and secure the supply of drinking water, which is the top priority.

Hot summers have an impact on water demand.

This year, the pandemic is making more people work from home, which also increases private water usage. Many are also enjoying staycations instead of going to the coast, which has had unforeseen consequences for water supply — filling up large paddling pools requires a lot of water all at once. "This summer is an exceptional situation; it's a challenge for the system," says Weyand.

On Tuesday, residents of smaller villages around Lauenau were asked not to water their gardens, fill pools or wash their cars. In the north-western town of Borgholzhausen, in the district of Gütersloh, the authorities even closed the local swimming pool so that the water tank serving a retirement home could be refilled. 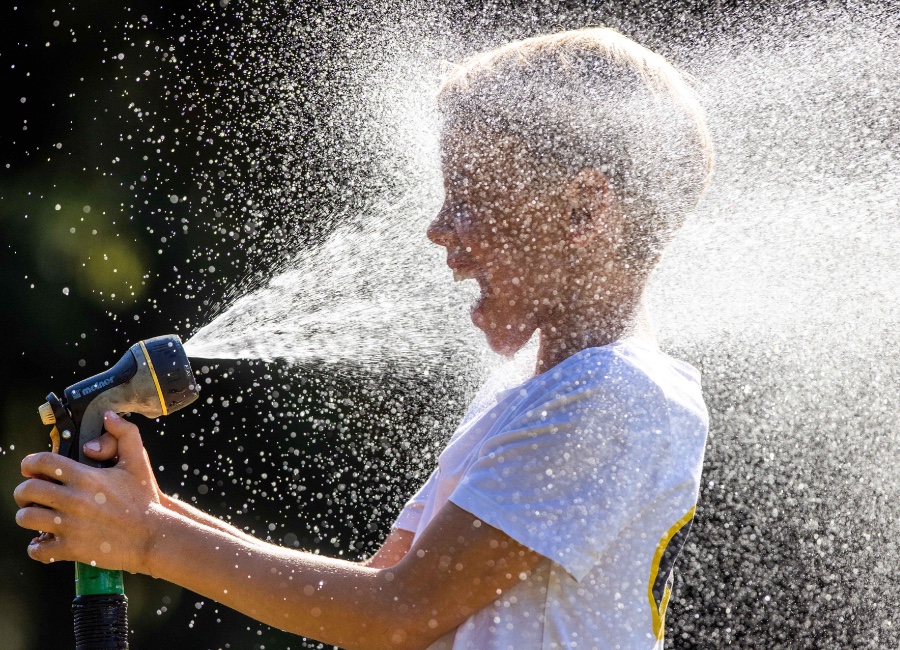 The little boy refreshes himself with cold water from the garden hose in Pokrent, Germany. — Photo: Jens BüTtner/DPA/ ZUMA Press

Could the BDEW not have anticipated this problem? Weyand says that sudden spikes in demand, like those seen over the last three years, pose a particular problem. Places that use a spring discharge system, as Lauenau does, are especially vulnerable during heatwaves. The area relies on three surface-level water sources in the Deister hills. These provide clean, nitrate-free water, but they are highly dependent on the weather, meaning supplies can dry up. Weyand says that local authorities should put in place back-up supplies so they can draw on reserves during dry periods. In Lauenau, the mayor has now pronounced the situation manageable thanks to a combination of supply from a neighboring water board in Nord-Schaumburg and residents temporarily halving their water usage.

The current problem in Germany is not a shortage but a distribution issue. In 1990, Germans were each using about 147 liters of water a day. Since then, many sources and waterworks have been abandoned, but these could be reactivated to meet increased demand. Cooperation between local water boards, as seen in Lauenau, could also be used more often as a temporary solution.

"If temperatures continue to rise, we will have to be more careful about how we use our resources," says Weyand. Building on and paving green land prevents groundwater from collecting under the land's surface.

The current problem in Germany is not a shortage but a distribution issue.

The build-up of nitrates is also a problem across Germany, especially for water sources near agricultural land. Some sources have even been abandoned because of high nitrate levels in the water. According to the EU, Germany has the lowest water quality in Europe, with nitrate levels far above the recommended limits. "This is a problem that affects all of society," says Weyand, calling for drinking water to be treated as a priority.

But there is still some good news for those who want to avoid crowded public swimming pools during the heatwave. Weyand says many parts of Germany are experiencing no issues with the water supply at all. So in Berlin, Hamburg and many other cities, Germans can fill up their paddling pools with a clear conscience.

Merkel To Moria: Is Accepting Migrants A Moral Imperative?

Around 140,000 Germans are residents in Spain, with large enclaves established on the southern co...