TOKYO — Cats are all the rage in Japan these days. Bookstores are lined with dozens of photo books featuring cute little felines, and they're popular online too. They also seem on track to surpass dogs as the pet of choice. So why are they stealing so many hearts?

There are about 100 titles on cats in the photo books section of Yaesu Book Center's main store in Chuo Ward, Tokyo. Dogs are featured in only about 30 books.

"Ten years ago, there were more books on dogs," says Shinji Takasugi, the store's PR manager. "But about two or three years ago, cats caught up and quickly took the lead. Photo collections of free-spirited stray cats are popular these days."

And 2016 calendars featuring cats are outselling the dog variety by about 50% at the same store. "Books and calendars about dogs are generally breed-specific, but this isn't true for cats," Takasugi says. "They sell to a wide audience."

A search for cats on YouTube returns 3.88 million hits, about 1.6 times the number for dogs. Unlike dogs, which tend to react to the camera, cats seem unfazed. Cat owners post videos showing them in all kinds of amusing situations, from disappearing into boxes to jumping in surprise at unexpected noises.

"Sometimes they snub you, sometimes they're all over you," says Yoko Manabe, editor in chief of the monthly magazine Neko no Kimochi (Cats' feelings). "Cats are unpredictable and interesting. They act on a whim and do as they please."

Cats are just as popular in the world of entertainment. The smartphone game Neko Atsume ("Collect the cats") was launched in October 2014 and has racked up 10 million downloads. There are also many commercials and films starring cats.

"Cat cafes have sprung up all over the place, and even people who have never kept a pet cat are falling under their spell," Manabe says. 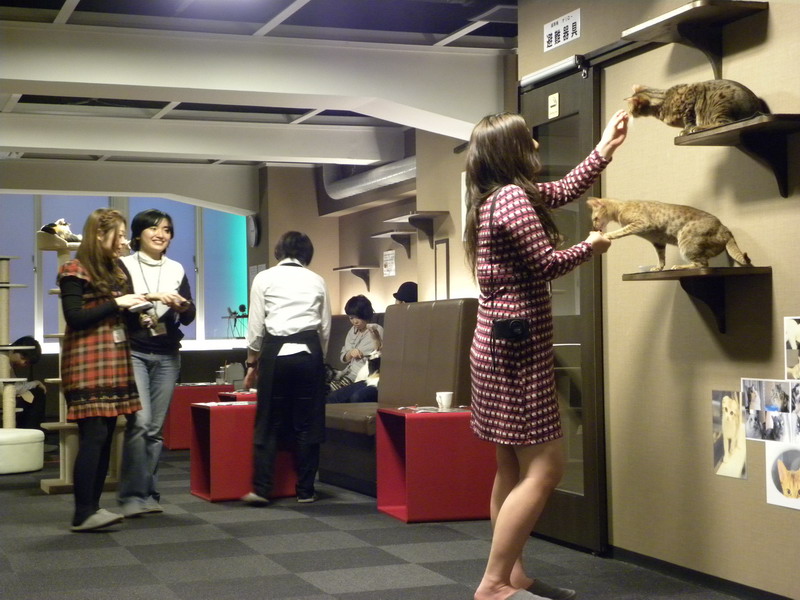 Sales of cat-related publications and goods are said to be having a positive effect on the economy, a phenomenon that has been dubbed Nekonomics. One reason behind the trend is that cats are a good fit for modern Japanese lifestyles.

"There's a growing number of working couples and households made up of elderly people," says Yoshio Koshimura, honorary chairman of the Japan Pet Food Association. "They probably tend to prefer cats, which don't require a lot of effort to look after."

Cats don't need to go for walks. They also don't get stressed easily even if their owners aren't at home all day, and they don't make enough noise to disturb the neighbors.

"In Western countries where there are many working couples, like the United States, France, and Germany, there are more pet cats than dogs," says Mitsuaki Ota, a professor at Tokyo University of Agriculture who researches the relationships between humans and animals.

"In Japan, we're beginning to see dog breeders go bankrupt due to the fall in dog ownership. As a result, dogs are becoming more expensive to buy. This risks creating a vicious circle in which fewer and fewer people own dogs."

In Japan, the popularity of different types of pets changes at a dizzying pace, so Koshimura believes prospective pet owners should think carefully.

"Rather than being swept up by a craze and buying a pet without much thought, first think hard about what kind of pet is suited to your lifestyle," Koshimura says.

Lower costs are another reason why cats are popular. According to a survey by Tokyo-based Anicom Insurance Inc., annual expenses for dogs are about 360,000 yen (about $3,050) per year, while those for cats are about half that. Dogs have higher food costs since they exercise more, and there are also medical expenses like vaccinations to consider.

One of the most striking photographs of the destruction caused by the tsunami that struck Japan and set off the worst nuclear accident since Chernobyl.

Regional Immunity? Why Asia Has Avoided The Worst Of COVID-19

East Asia is home to 30% of the world's population but has recorded only 2.4% of the COVID-19 global death toll. Scientists are looking at possible immunity from past epidemics or even genetics.